If you’re in the market for a new mountain bike and need some inspiration, have a read below. We have put together a list of the 19 best mountain bike-specific bike brands.

Some of these brands specialize in only producing mountain bikes, whereas others primarily focus on mountain bikes and offer other styles as part of their broader lineup.

We’ve listed all of these brands in alphabetical order and will keep updating the selection in the future. 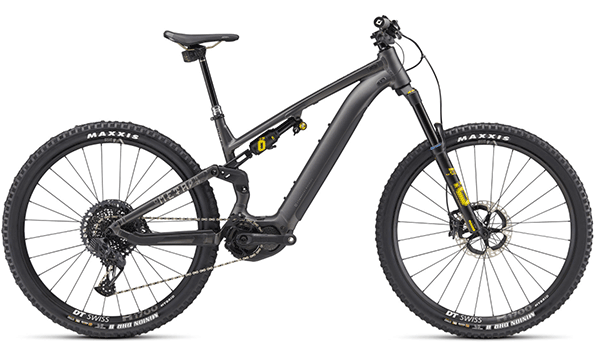 Although Commencal bikes does not manufacture mountain bikes only, its range is 90% focused on high-end aluminum MTBs so they must be covered in this list. 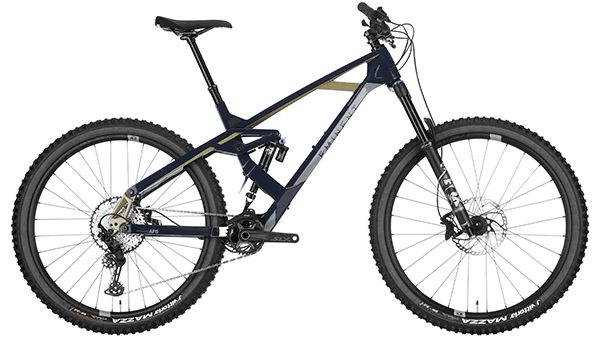 Originally founded in 2014 in San Diego, California, Eminent Cycles was formed by Jeff Soncrant after he couldn’t find his perfect bike on the market.

They released their first bike, the Haste in 2017, which has since been replaced by the Onset. The brand mainly runs direct-to-consumer although there is a small network of approved stockists that sell the bikes.

Their bikes use an Active Float System (AFS) is built to provide reliable traction and control in any circumstance. The brand currently manufactures three bikes, Onset ST, Onset LT, and Onset MT each designed to excel in their respective disciplines. 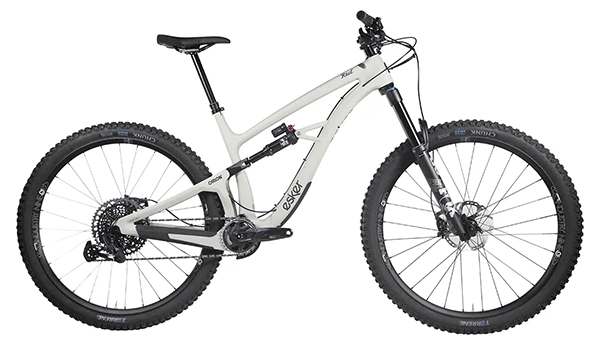 Esker Cycles currently produce four bikes, the Rowl, the Elkat, the Japhy, and the Hayduke. They start with a base model frame and you can add component levels on, so it suits any budget. High performance but a relatively new brand, these bikes are the ones to watch in the coming years. 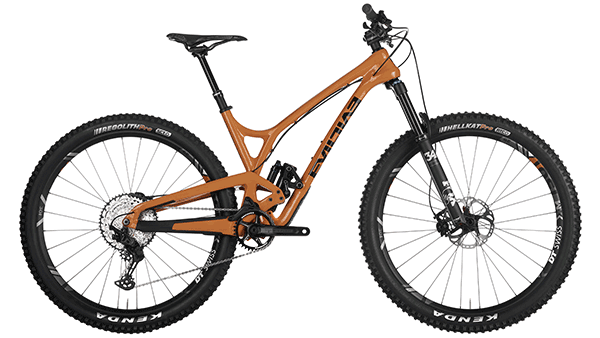 Evil Bikes is a brand with an interesting history, with more than one go at becoming a fully-fledged mountain bike manufacturer.

Although the last decade hasn’t been the easiest for the Washington-based brand, they are now a well-respected manufacturer of high-performance mountain bikes and loved by riders across the globe. They currently offer a wide range of bikes across several disciplines including trail, enduro, dirt jump, and gravel. They also currently sponsor a team of riders named the ‘Black Collars’, a group largely made up of free riders who all share a passion for mountain biking. 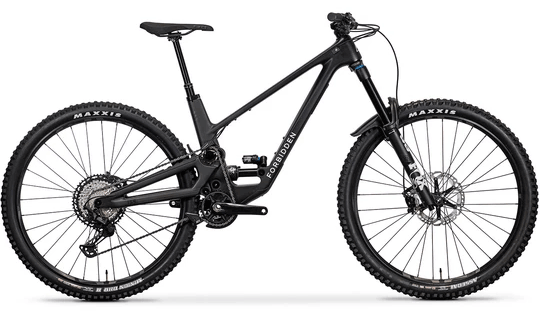 They began with one single bike, the Druid – a trail bike with cutting-edge design and technology featuring the brand’s own ‘Ziggy Link’ suspension technology. The Ziggy Link allows riders to alter their Druid bikes to accommodate mullet wheel geometry, and replace the rear 29″ wheel with a 27.5″ one to encourage greater maneuverability and agility in the bike.

Currently, the brand manufactures two bikes, the Druid, a trail bike, and the Dreadnought, a powerful 170mm travel bike. Both are on the pricey side, but the bikes are built to be high-performance bikes capable of riding in plenty of conditions and terrains. 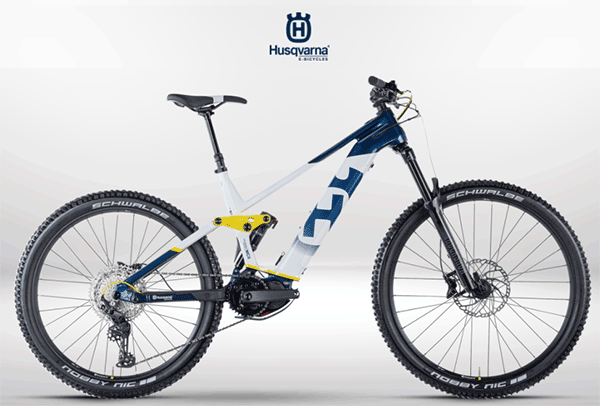 Although Husqvarna has been around for over a century (previously known as Huskvarna), their off-road motorcycles have gained popularity in the motorcycle industry since the very beginning. It wasn’t too long ago when one of the world’s top motocross bike manufacturers KTM bought Husqvarna, and here’s where things get interesting.

Just recently, the brand has jumped into the booming e-bike market by doing what it does best – making off-road two-wheelers. So far they’ve put out a competitive range of kids’, hardtail, and full-suspension electric mountain bikes. They are definitely worth considering. 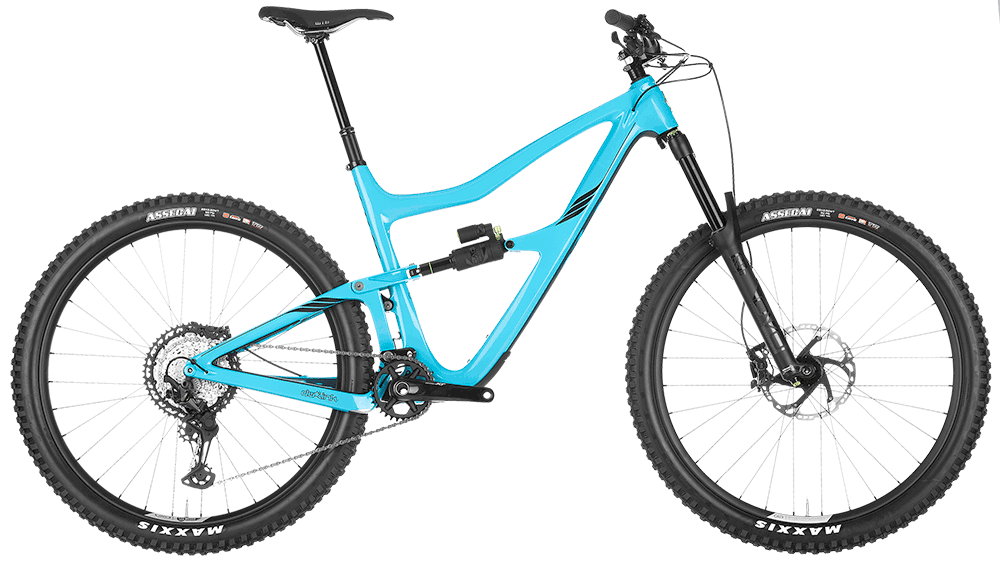 Founded in 1982 by Scot Nichols, aka ‘Chuck Ibis’, Ibis Cycles has since become one of the quirkier, more innovative mountain bike manufacturers.

Now headquartered in Santa Cruz, California, the brand has expanded to produce a wide range of mountain bikes across several disciplines, including; trail, enduro, and most recently, gravel. After a brief hiatus from 2000 to 2005, the brand is now thriving and sponsors its own enduro race team. 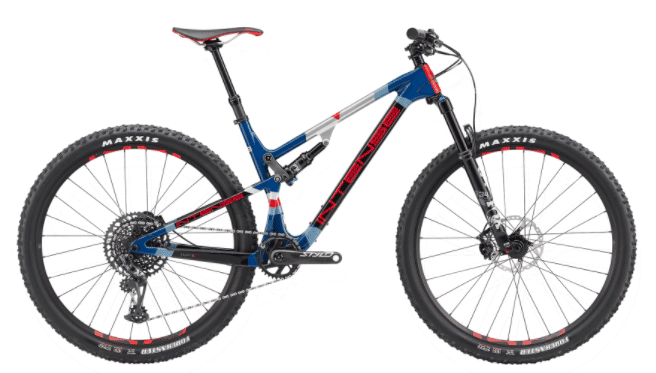 Founded in 1993 by Jeff Steber, Intense Cycles is a high-performance mountain bike brand that uses its racers and factory team to build and develop new ideas.

Currently, their top downhill rider is Aaron Gwin, a five-time World Cup overall champion who has been integral to the design and development of the Intense DH bike, the M29.

Intense Cycles makes a range of mountain bikes, not just for the professionals, across several disciplines and budgets, including XC, E-MTB, and more. Their bikes are built to a high standard and are well regarded across the mountain biking industry, and riders alike, making an Intense Cycles MTB a great choice for your next bike. 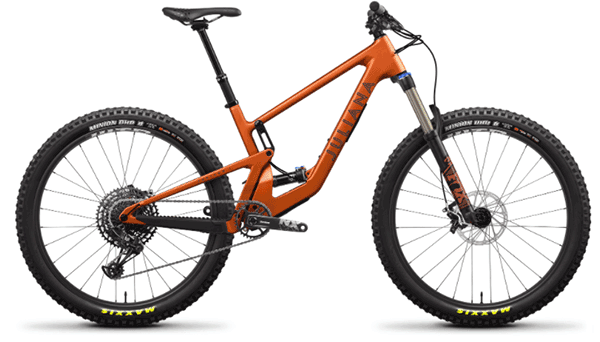 Juliana Bicycles is a pioneering brand and the first to produce a women’s specific mountain bike.

Led by former champion mountain bike racer Juli Furtado, they approached Santa Cruz Bicycles who offered the use of their brand/facilities to allow the brand to build its foundations and successfully market its women’s bikes.

Currently, they make several mountain bikes across a range of disciplines, all using the Santa Cruz VPP suspension design, but tailored to the specific needs of female mountain bikers. The brand sponsors a pro team, the Juliana SRAM Pro Team, which includes six riders from across the United States and Canada who compete in races such as the Enduro World Series.

Their bikes are renowned for quality and for being high-performance race-ready machines, so if you’re after a new mountain bike, Juliana Bicycles is a great place to start. 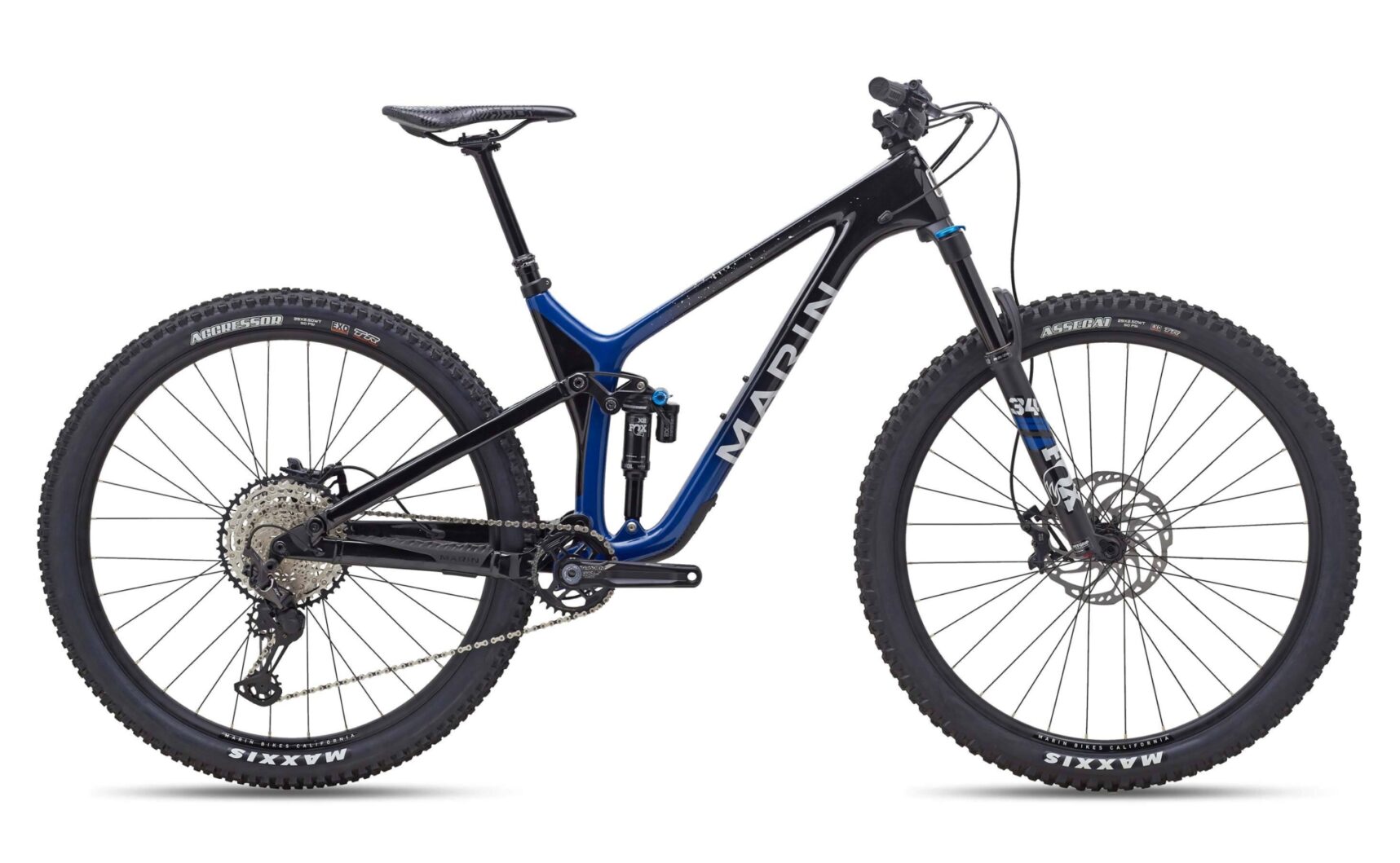 Marin Bikes is an industry-leading mountain bike brand and one of the first to produce titanium and full-suspension MTBs.

Marin founder Bob Buckley sold the company in 2012 and they’ve continued in a similar fashion, designing and developing exciting bikes are the forefront of innovation. Today, they have a wide range of bikes, specializing in mountain and gravel with a range of options in each discipline. Additionally, Marin has urban, fitness, and electric models.

The brand has gained recognition for its impressive MTB tech including the MultiTrac suspension platform that improves full-suspension performance by balancing small bump compliance and pedal efficiency. Their bikes are renowned for exceptional quality, versatility, and performance so be sure to check out their range when you’re searching for a new mountain bike. 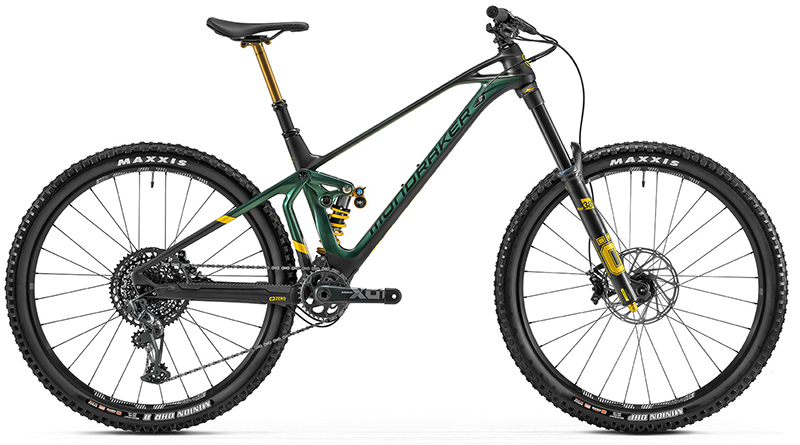 Mondraker is most likely one of the best electric mountain bike brands in the business, and that’s for the obvious reason that they’ve released a bunch of 29er MTBs in all kinds of disciplines. Their focus is aimed towards the high-end market, and they have succeeded their position in there. Mondaraker mountain bikes are in a niché market competition. 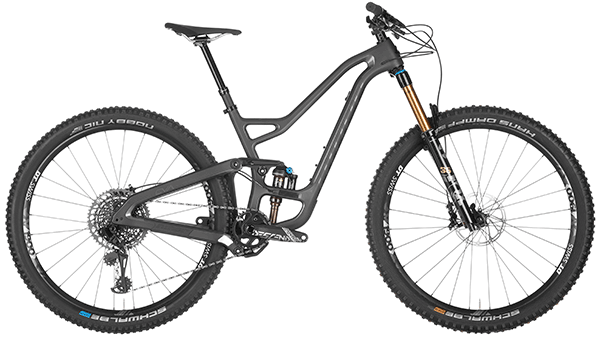 With a tagline like Pedal Damn It! Niner Bikes are known for their fun and their commitment to dirt.

They’re a company that is engaged with the local mountain biking community, as well as producing high-end bikes. Based out of Fort Collins, Colorado, the brand often tests their new bikes on the trails local to them before releasing them to the market.

Currently, they offer a wide range of performance mountain bikes across several disciplines including XC, trail, enduro, gravel, and E-MTB. Their bikes are on par with industry prices for high-end bikes, but they are still relatively expensive. 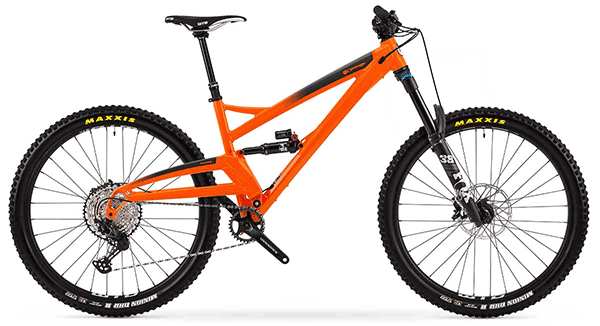 Orange Bikes is a British MTB brand founded in 1988 in Yorkshire in the north of England.

From their first bike, the Clockwork Orange (named after the film), the brand has since achieved cult status due to the strength and longevity of the bikes they produce. While their bikes were once made in Taiwan, all are now manufactured and assembled in Britain, and in-house in their headquarters in Halifax.

They currently manufacture several bikes across many disciplines including gravel, hardtails, downhill/gravity, enduro/all-mountain to name a few. The bikes are considered an investment, but they will last you a long time and are extremely capable bikes. 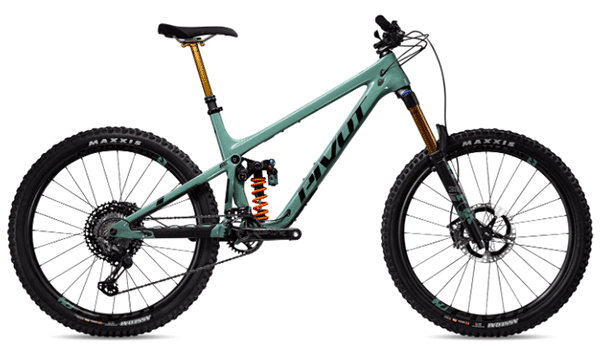 After Titus Cycles was bought by Vyatek Sports in 2006, Chris found himself back designing mountain bikes again after a short break, and Pivot Cycles was born. The bikes were designed around the DW-Link suspension system, and since then the company has built its reputation as being one of the leading bike manufacturers in terms of development and research.

Fast-forward to today and Pivot Cycles make a whole host of bikes across different disciplines, including XC, trail, enduro, downhill, and more. All bikes are made from carbon fiber except their jump bike, the Point, which is made from Chromoly steel. 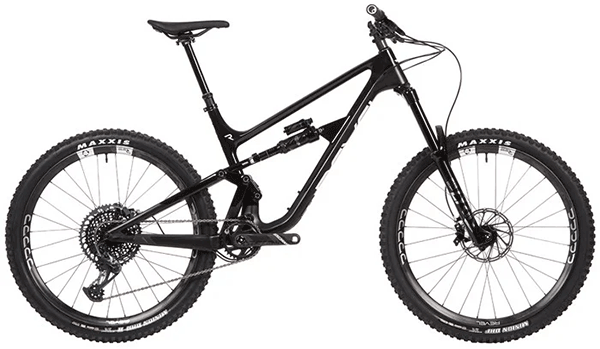 A new brand that was only founded in 2019, Revel Bikes already has a reputation for innovative and forward-thinking mountain bike design.

With their bike based around the Canfield CBF linkage design, their mission is to create some of the best mountain bikes on the market. Currently, they offer three mountain bikes, the Ranger, the Rascal, and the Rail. All with unique characteristics, but all built around the CBF suspension.

As expected from a somewhat boutique brand, the prices are quite high, but you do get a lifetime warranty on the frames, and there are multiple build options for each bike to suit an array of budgets. 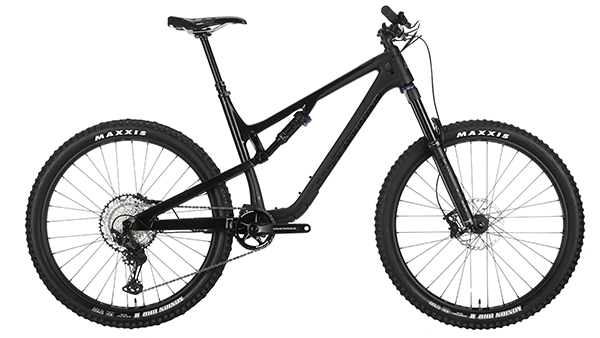 Named after the stretch of mountains in which they were founded, Rocky Mountain Bicycles have a long history of producing high-quality and race-ready mountain bikes.

From winning World Cups to competing at the Olympics, these bikes have a racing pedigree. They currently sponsor several professional riders within freeride, enduro, and XC, as well as several ambassadors around the globe.

Their current crop of bikes extends across most disciplines including XC, trail, enduro, downhill, and even kids’ bikes to name a few. Their price bracket sits alongside most other high-end mountain bike brands, so expect to be spending a couple of thousand dollars on a Rocky Mountain. We’re sure, however, that current owners would say it’s worth the price tag. 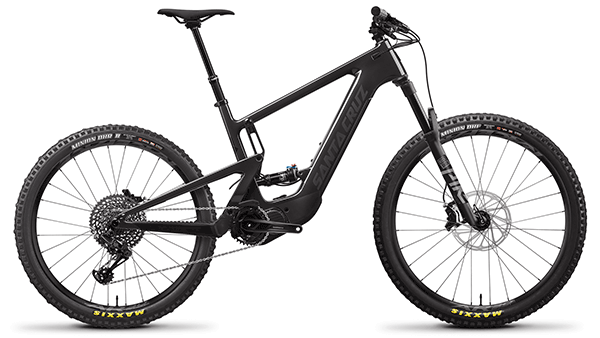 Founded by Rob Roskopp, Mike Marquez, and Rich Novak in 1993, Santa Cruz Bicycles has been at the forefront of modern mountain biking technology and development since the brand released its first bike, the Tazmon.

Since then, they have grown to offer more bikes across many disciplines, and have even created a spin-off line of women’s bikes under the brand name Juliana. Santa Cruz manufactures high-end performance mountain bikes and has had major success in the professional ranks, with current team riders including Greg Minnaar and Luca Shaw.

Shop on evo.com Read Our Review 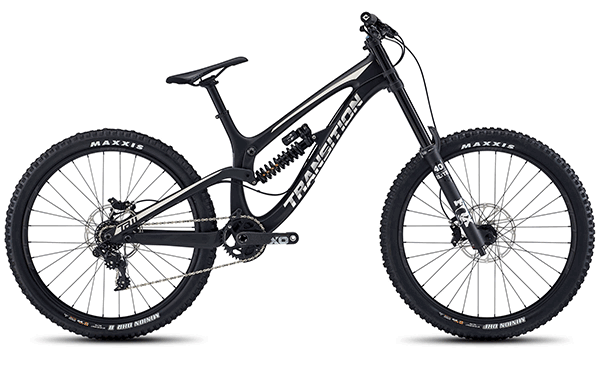 Proudly rider-owned, the Bellingham-based brand has been at the forefront of developing mountain biking technologies since its inception in 2001.

They have developed such technologies as the GiddyUp suspension system, which allows the bike’s suspension to be tuned to the rider’s specific needs, smoothing out bumps and decreasing power transfer losses. Transition bikes are well received by reviewers across the globe and offer a range of high-quality mountain bikes – now with lifetime warranties on the frames. Their range has expanded to several disciplines including trail, enduro, downhill, dirt jump, and kids’ bikes so you can buy one for everyone in the family.

Shop on evo.com Read Our Review 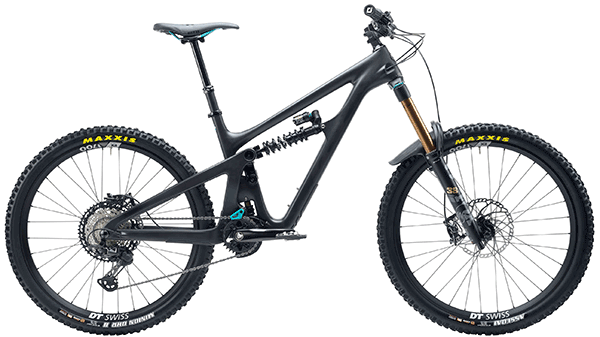 Yeti’s philosophy is simple: they build bikes they want to ride.

In 1985 John Parker, a former Hollywood set designer and welder founded Yeti Cycles after falling in love with the burgeoning sport.

They had several sponsored riders whom they used to develop bikes with, using their ‘For Racing Only’ (FRO) models. After the company changed hands a few times, they are currently well represented in the pro ranks by several top riders including Richie Rude and Shawn Neer in the Yeti/Fox Factory team.

They have developed a wide range of mountain bikes across several disciplines and are among the most respected brands in the industry.

Why didn’t we include other large bike brands?

Although brands such as Cannondale, Trek, Specialized, Norco, Giant, etc have a wide variety of all kinds of mountain bikes in their fleet, we wanted to give a shoutout to mountain bike-specific brands only.

There are plenty more MTB brands you could suggest in the comments section that we haven’t covered JUST YET!