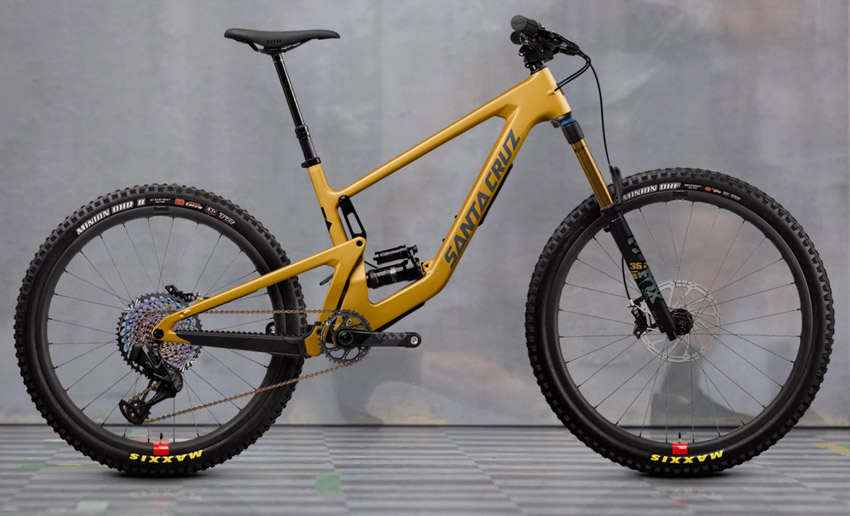 The Santa Cruz Bronson hits the sweet spot between performance and play, and the mixed wheel design enhances the bike’s all-rounder personality.

The latest model appeals to a broad range of riders and riding styles and is capable on varied terrains without excelling in a specific domain. With this new release, Santa Cruz showcases cycling’s most advanced technologies and engineering to deliver exceptional ride characteristics, performance, and reliability.

This Santa Cruz Bronson review will provide you with all you need to know about the updates for this year, the bike’s main features, strengths and weaknesses, and the different builds in the series.

A mixed-wheel trail/enduro bike with unbeatable versatility and a premium construction.

The Bronson is the first mullet mountain bike on the Santa Cruz lineup. The new version has several updates on the 2021 Santa Cruz Bronson but retains the do-it-all DNA that made it one of the brand’s most popular models.

This bike has the most versatile capabilities of all Santa Cruz bikes; equally competent on the local jump park as it is on aggressive singletrack trails.

The mullet design gives the Bronson unbeatable agility to rip around tight corners on the downhill and the added stability and roll-over capacity of the 29er up front.

Santa Cruz Bronson is another impressive trail option that is ideal for riders who love the freedom and creativity afforded by a jack-of-all-trades MTB. 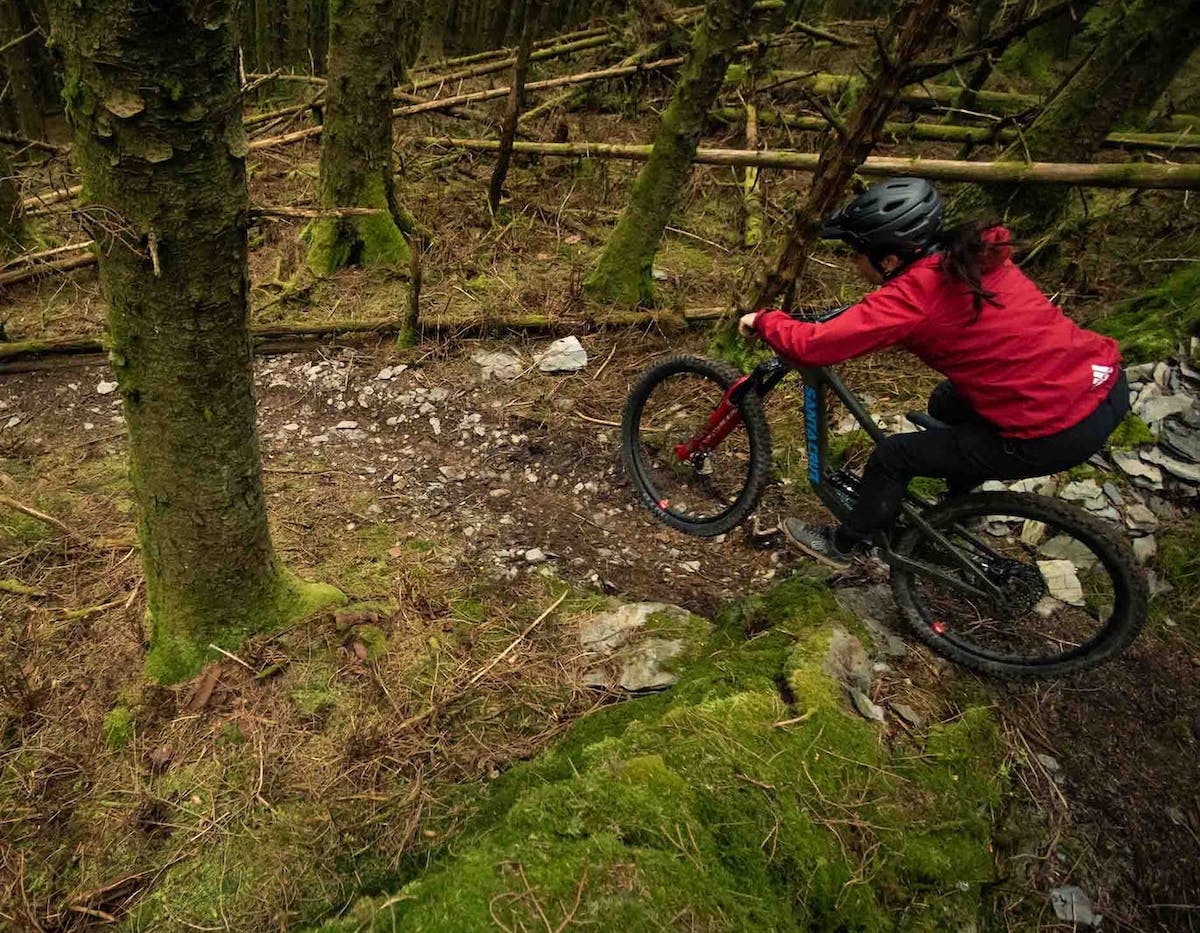 The Santa Cruz Bronson is the brand’s generalist mountain bike, the one you choose if you’re not sure of your preferred riding style. Each aspect of the geometry and component choice serves the purpose of creating a versatile and exciting ride.

Next, we’ll look at the new features and how the individual components and design features affect its ride characteristics.

The Santa Cruz Bronson 2023 is pretty different from the 2021 model, most notably the mixed-wheel design. This update makes the Bronson the second mullet bike on the Santa Cruz lineup, with previously just the V10 downhill bikes using this setup.

The Bronson received a few geometry updates with the change to a 29″ front wheel. Most notable of these updates are the longer reach and higher stack.

The Santa Cruz carbon handlebars are another impressive addition to the bike (excluding the R and S models). These improve comfort through greater compliance.

Finally, one negative change to this year’s lineup is that they removed the Santa Cruz Bronson 2021 aluminum alloy model. Instead, all Bronson frames are carbon, and the prices start at over $5,000, creating a high barrier to entry.

Bronson’s frame is available in carbon C and CC, as well as in two colors—mustard yellow and moss green.

As mentioned above, Santa Cruz has focused on carbon fiber for the latest Bronson. The frames (C and CC) are recognized worldwide for their exceptional stiffness and strength. The Carbon C is roughly 0.6lb heavier than the Carbon CC but delivers the same ride qualities.

Each frame is designed, tested, and prototyped in Santa Cruz’s carbon lab in California, giving its engineers and designers complete control over the quality at every manufacturing stage. In addition, the frames are backed up by a lifetime warranty and crash support.

The Bronson has excellent frame protection with a molded rubber swingarm and downtube protector. In addition, Santa Cruz has sleek integration with an integrated headset and internal cable routing.

The Santa Cruz Bronson v4 has distinct geometry to the v3, primarily due to the mixed wheel design. Of the five sizes (XS-XL), only the XS has a 27.5″ front wheel.

Each Bronson has size-specific chainstays, ensuring consistent fit and handling for all rider heights. The overall geometry of the Bronson is quite slack and long, especially compared to the previous generation. This design improves stability and control on steep descents without negatively impacting the bike’s agility. The one issue with the slacker design this year is that the seat tube angle is a little too slack for climbing.

However, riders can adjust Bronson’s geometry with a flip-chip. The low flip-chip setting provides a more enduro-ready position and complements the bike’s ride characteristics.

Another complaint from long-term riders was that the front of the bike feels too high. But, overall, the geometry produces a well-rounded ride that can perform all over the mountain.

The Bronson frame fits all sizes and types of rear shocks.

Santa Cruz’s proprietary lower-link VPP suspension technology allows the Bronson to perform above what you would expect from a 150mm travel frame.

The pedaling efficiency is the most significant improvement. Despite the 150mm of travel in the rear, pedal bob is almost imperceptible, making this trail bike a surprisingly effective climber.

In addition to efficiency, Santa Cruz manipulates the VPP on this particular bike to provide extra bottom-out resistance, giving you more control over chunky terrain.

How Does the Santa Cruz Bronson Perform on the Trail?

At the beginning of the review, we mentioned that the Bronson is a do-it-all style of bike that doesn’t excel in any specific environment; instead, it is an all-mountain performer that can handle everything but the most extreme ends of the spectrum.

The Bronson’s cornering pedigree is one of its most impressive traits. The mixed-wheel setup makes it super agile and snappy in the corners, allowing you to carve through with confidence and speed.

The one difference is that to nail the corners, the 29er wheel and high front end demand a little more load from the upper body than if it were a 27.5″. However, the larger wheel and wider tire up front provide more stability and traction. Once you are accustomed to how this mixed-wheel bike rides, it’s incredibly playful and versatile.

Again, this bike overperforms on the climbs thanks to the VPP suspension tuned for pedaling efficiency and premium carbon fiber frame, which maximizes power transfer. The Bronson is comfortable, balanced, and efficient on all but the steepest gradients, with plenty of acceleration from the smaller rear wheel.

The slack seat tube angle and high front make it slightly off-balance on very steep terrain, with too much weight in the rear. However, lowering the handlebar slightly and shifting the saddle position forward helps even out the weight distribution for more efficient steep climbs.

Finally, both suspension components have lockout available for climbing, but the rear lockout is only necessary for climbs on pavement, as the pedal bob is already minimal without using it.

The Santa Cruz Bronson is a lively descender with plenty of maneuverability on tight, technical downhill sections and a surprising ability to carry speed over rougher terrain.

A 27.5″ wheel in the back and 150mm rear end mean it will never be the fastest on advanced enduro or DH trails, but it easily holds its own on most downhill terrain and is lightning fast on flatter sections with lots of corners to rip around.

The one area where the Bronson suffers is at high speeds on terrain with successive big hits. In these situations, it’s better to drop your speed and take advantage of the fast acceleration to get going again when you’re in the clear.

What Can Be Better?

The Bronson is easily one of the best full-suspension mountain bikes we’ve seen, but you can have an even more complete bike with the following modifications.

Firstly, many users complain that the stock dropper post’s travel is too short (just 175mm) and would benefit from a 200mm-travel post. In addition, the 180mm rear brake rotor is too small and prone to overheating and losing performance on long descents.

Another weak spot on this bike is the Maxxis DHF/DHR tires. They are acceptable for the lower-priced Bronson models, but they’re still too lightweight, and slashes could damage the carbon rims of the higher-end models. Upgrading these tires to a more durable model is a wise move.

Finally, the 50t cassette cog on the SRAM models of the Bronson provides less range than a 52t cog typical on this style of bike. This smaller plate limits climbing capability on the steepest terrain but is adequate for most riders, most of the time. 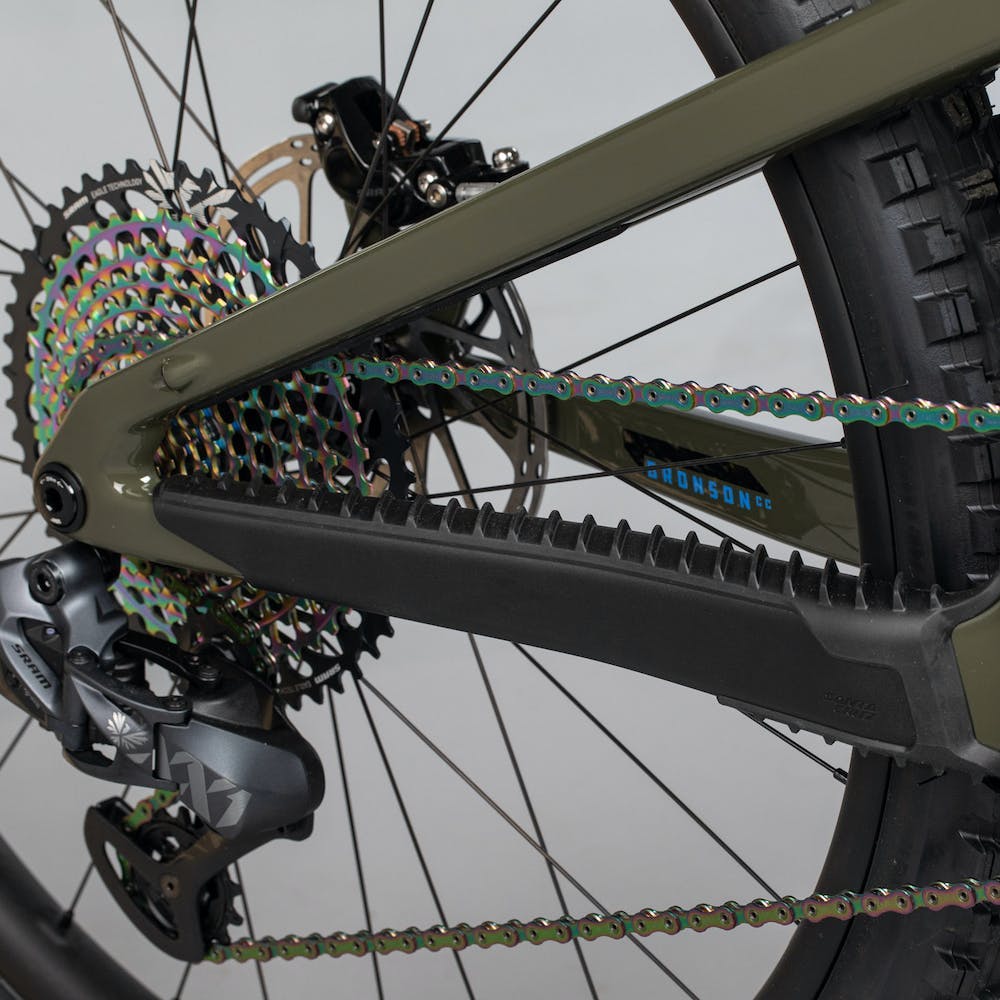 The Bronson is sold in six builds, starting at $5,399 and going up to $12,199 for the top model. Unfortunately, there is no Santa Cruz Bronson aluminum this year.

The Carbon CC builds (X01, X01 AXS, and XX1 AXS) cost $8,599, $10,549, and $12,199 respectively. They demonstrate the best in MTB componentry, starting with a FOX 36 Float Factory fork, RockShox Super Deluxe Ultimate shock, and Code RSC brakes. Both electronic-shifting models get Reserve 30 carbon rims, and the most expensive version benefits from an upgraded stem, headset, and hubs.

The Santa Cruz Bronson Frame comes with a broad size range between 4’8″ and 6’5″. Remember, the XS frame uses two 27.5″ wheels instead of the mixed-wheel design.

If you’re between two bike sizes, you would ideally test-ride both bikes at a bike shop to see which one feels better. Otherwise, you can measure the stack and reach of your current mountain bike and compare them to both sizes of the Bronson to see which one is the closest match.

Other Models to Consider:

Is the Santa Cruz Bronson a trail or enduro bike?

The Santa Cruz Bronson is primarily a trail bike, but it crosses over with the enduro category. The Bronson is considered a low-travel enduro bike, as it only has 150mm of rear travel, whereas most enduro models use 160 to 180mm of travel.

Is the Santa Cruz Bronson a good climber?

Yes, the Santa Cruz Bronson is a good climber for a bike with 160mm and 150mm of suspension travel. It benefits from Santa Cruz’s lower-link VPP suspension platform, tuned specifically to boost pedaling efficiency. As a result, the Bronson has minimal pedal bob and climbs well compared to similar bikes.

Is the Santa Cruz Bronson playful?

Yes, the Santa Cruz Bronson is a playful bike thanks to its small-diameter rear wheel and short-ish chainstays. Nonetheless, the bike is still pretty stable and fast as it has a long wheelbase and reach. A more playful, agile bike on Santa Cruz’s lineup is the 5010.

How much travel does a Santa Cruz Bronson have?

The Santa Cruz Bronson has 150mm of rear travel and 160mm of front travel. However, the frame is compatible with all sizes and types of rear shocks, meaning you can have more rear travel on the Bronson if you want.

Can you put 29 Wheels on a Bronson?

No, you can not put 29 wheels on a Bronson. The Bronson is only compatible with a front 29-inch wheel as Santa Cruz designed the geometry to work with a smaller rear wheel. Likewise, you cannot put a 27.5″ wheel on the front.

Does the Bronson have a flip chip?

Yes, the Bronson does have a flip chip. The Bronson’s flip chip adjusts the BB height by 3mm, the head tube angle by 0.2 degrees the seat tube angle by 0.6 degrees. The low setting puts the bike in a slacker, downhill-ready position.

Bottom Line: Should You Buy a Santa Cruz Bronson? 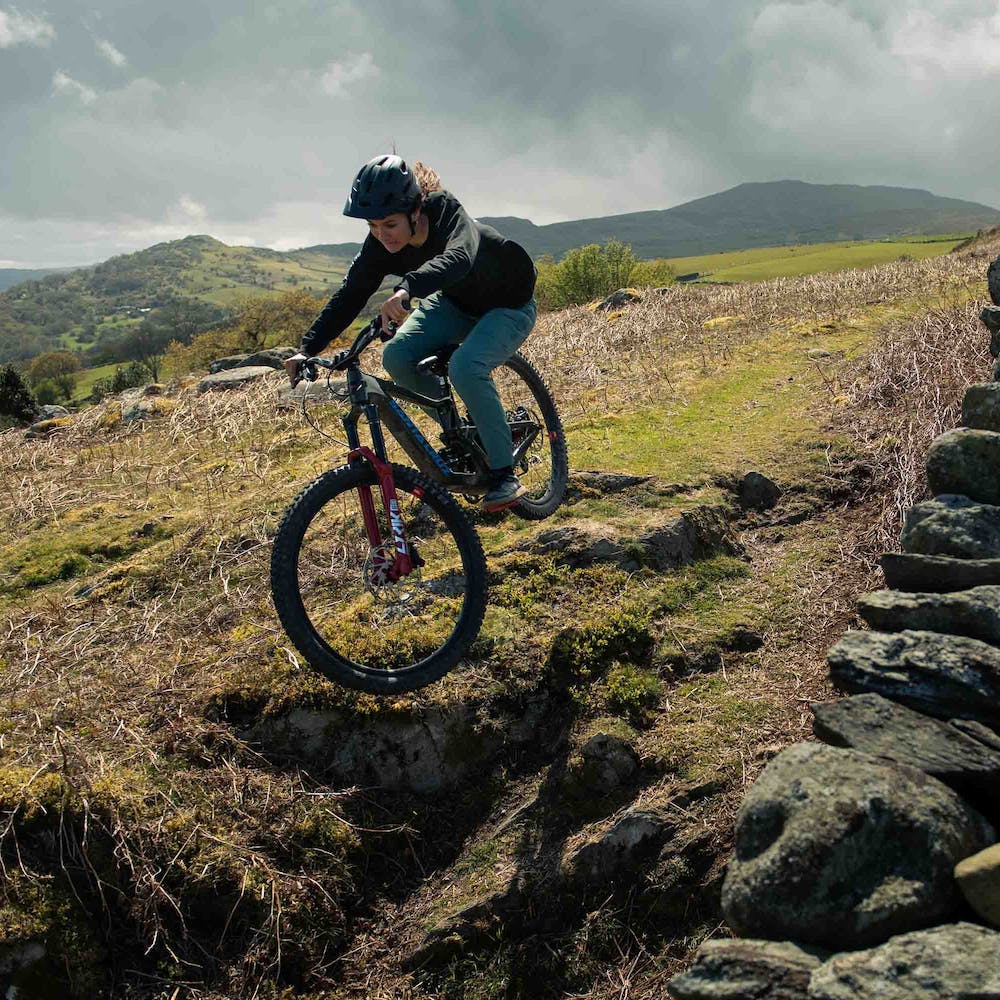 The Bronson is a unique mixed-wheel trail/enduro bike that is a true jack-of-all-trades but master of none. In Santa Cruz’s own words, choose the Bronson if you “want to just be a mountain biker in the broadest sense of the word.”

This bike is playful and agile yet high-performing across varied, demanding trails. While it isn’t the most capable on extreme enduro or downhill terrain, the Bronson inspires confidence and encourages fun riding all over the mountain.

Unfortunately, the barrier to entry for this bike is high, with prices starting at over $5,000, but if this fits your budget, you’ll be guaranteed industry-leading construction and quality. You should consider the Santa Cruz Bronson if you have a big budget and want a versatile mixed-wheel trail bike to last a lifetime.

Where to Buy Santa Cruz Bronson?