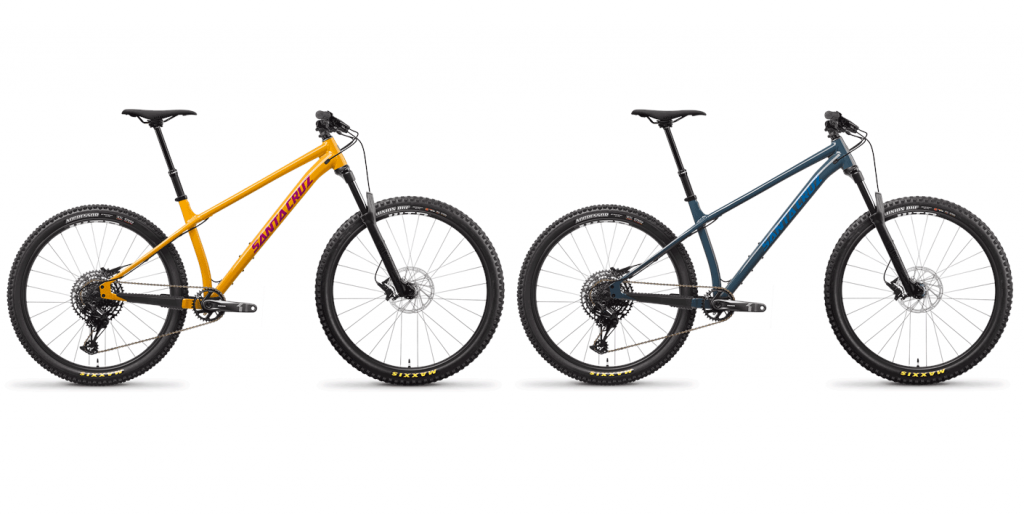 Californian-based Santa Cruz Bicycles has been one of the world’s leading mountain bike manufacturers for several decades now. Founded in 1994 by Rob Roskopp, Mike Marquez, and Rich Novak, the brand has grown to become hugely popular amongst downhill, trail, and all-country MTB riders.

Popular Santa Cruz bikes like the Hightower and Tallboy are firm favorites, commonly found in shredding trails and mountain passes all around the world. Since the early 2000s, Santa Cruz has been revolutionizing the downhill mountain biking scene with its patented Virtual pivot Point (VPP) technology.

While you might not find such groundbreaking technology on the hardtail Chameleon, you won’t be left disappointed by the incredible stability and speed of this lightweight trail bike. 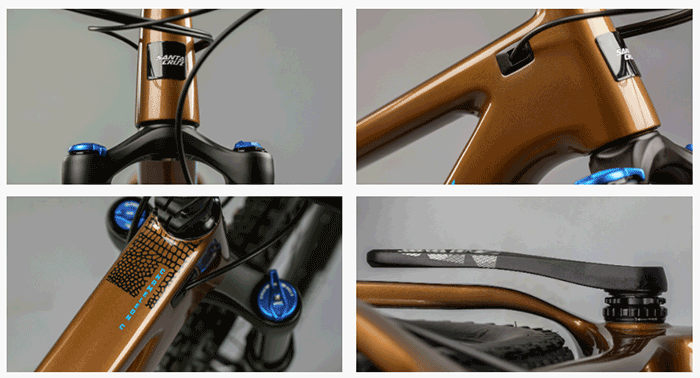 The Chameleon has long been a favorite of aggressive trail riders and represents Santa Cruz’s flagship hardtail MTB. It’s available in both aluminum and carbon, with 27.5″ or 29″ wheels, and several different build specs ranging from $1949 to $2699 in price.

The full-carbon versions come in at just under 13kgs, making them some of the lightest MTBs available but even the 29″ aluminum Chameleon weighs only an impressive 13.6kg. The original Chameleon got the nickname Tin Lizard, serving as a compatible freeride hardtail and single-speed XC bike but several upgrades have occurred since then.

Now, the Chameleon is an exciting but well-balanced all-rounder, designed for high-speed trail riding. The geometry is unique, providing excellent maneuverability upfront even on relatively steep descents – something seldom found in hardtails. It’s in no way a downhill bike but you’ll feel confident enough weaving between rocks on medium descents.

Santa Cruz has always been a boutique brand that, despite moving much of its frame manufacturing to China and Taiwan, still has all its bikes assembled in California. Recently, Santa Cruz has upped its game in the carbon world, introducing its own carbon wheels in 29, 27.5, 700c, and 650b sizes.

This has helped reduce weight across the board as Santa Cruz introduces lightweight carbon-wheeled models in its downhill, trail, gravel, and all-mountain models. The new ‘Reserve’ line-up promises to catapult Santa Cruz even further into the limelight as one of the leading mountain bike brands in the world.

The Chameleon Reserve SE is just one such example of how Santa Cruz is dedicated to constantly improving and pushing the boundaries of what’s possible on a mountain bike. We hope to see this trend continue as riders demand stronger, lighter, and more aggressive bikes from the world’s top manufacturers. 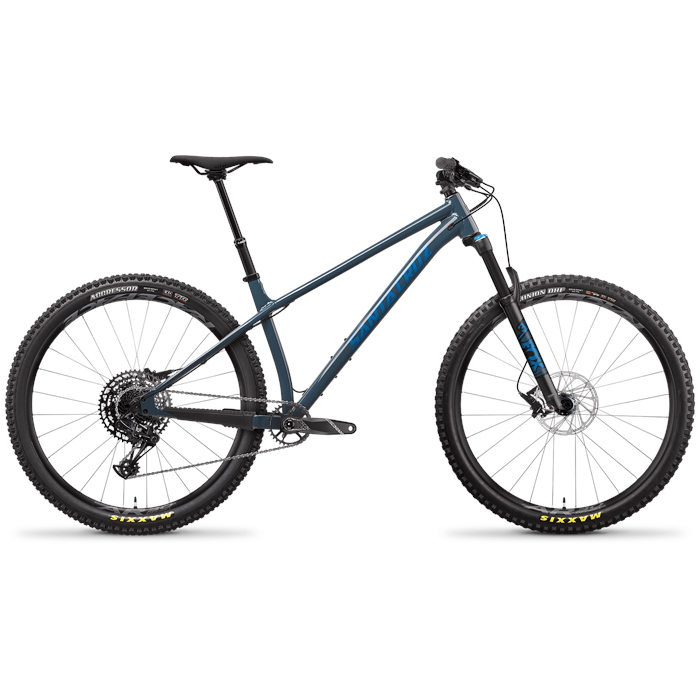 The aluminum Chameleon frame retails for $799 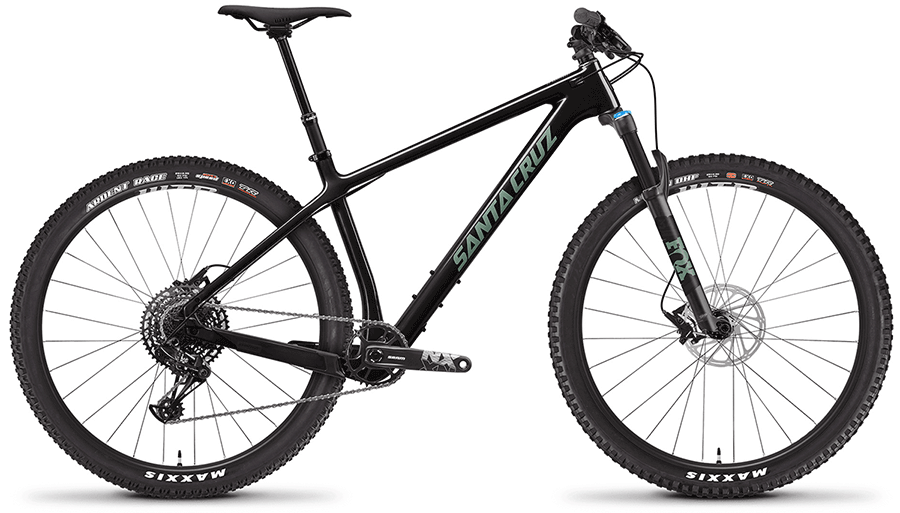 The Chameleon 7 C 29er R-Kit is another version of Santa Cruz’s killer carbon hardtail, fitted with SRAM NX Eagle drivetrain and available with both 27.5″ and 29″ wheels. Just like previous versions, it features aggressive geometry designed to take on rougher terrain than hardtails can typically handle.

The R-Kit version is fitted with SRAM’s Guide T hydro disc brakes – slightly more affordable than Guide R but still four-piston with Bleeding Edge technology and a Direct Link lever. They lock on to WTB ST i25 rims with SRAM Boost hubs and Maxxis Minion 2.3″ tires.

Like other Chameleon’s, the 7 C R-Kit comes with 120mm of travel, this time courtesy of Fox’s mid-range Rhythm 34 fork. Like all Fox forks, it’s smooth on press and snappy on the release but you might need to fine-tune the air compression to your specific needs. Overall, it’s a good choice for a more affordable option in the Chameleon range, plus you get some decent Race Face finishings along with an SDG Tellis dropper post. 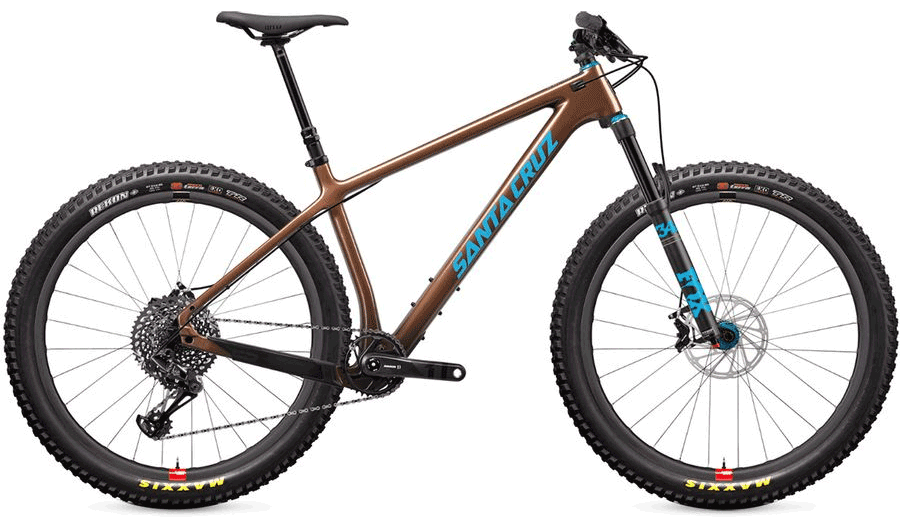 The Chameleon Reserve SE is a full carbon hard-tail, ideal for riders that like a solid, aggressive ride but don’t need – or want – rear suspension. It has the kind of stiff, lightweight carbon frame usually reserved for top-of-the-range downhill bikes, and yet here it is on a hardtail MTB.

This will please pro trail riders who like to charge singletrack with speed and confidence, knowing they won’t be taking on any large drops.

The Reserve SE version of the Chameleon takes things up a notch with a top-class SRAM GX Eagle drivetrain combined with an X1 Eagle carbon crankset. And they’re not slowing down there, keeping the quality rolling with SRAM Guide R hydraulic disc brakes with 180mm Avid rotors.

This is clearly not your standard hardtail but rather a rock-solid, lightweight beast intended to compete with the best full-suspension bikes out there.

Speaking of suspension, the Chameleon Reserve SE comes with a Fox 34 Performance fork providing a decent 120mm of travel – just the right amount to soften vibrations and swallow up heavy impacts without dampening the ride.

This gets even more support from the excellent Maxxis Minion tires running on Santa Cruz’s own Reserve 27 carbon rims, keeping the weight down even more. Best be careful on this bike or you might just float away!

What is a faster hardtail by Santa Cruz bikes?

The Highball is a faster version of the Chameleon with smaller travel and XC spec.

Trek Roscoe is an aluminum 650b with 120mm travel, while the Santa Cruz Chameleon offers a larger variety of set-ups.

Chameleon comes in two different settings and with adjustable chainstays.

PROs and CONS based on owner reviews