Schrader and Presta Valve — What Are the Main Differences?

Bicycle tire valve types are not the most interesting topic in the cycling world, and something most people pay little attention to. However, it’s important to know the differences for when you inevitably need to buy a new tube.

The Schrader valve and Presta valve are the two most common types of bicycle tire valves, and while others exist, you’ll probably never encounter them. 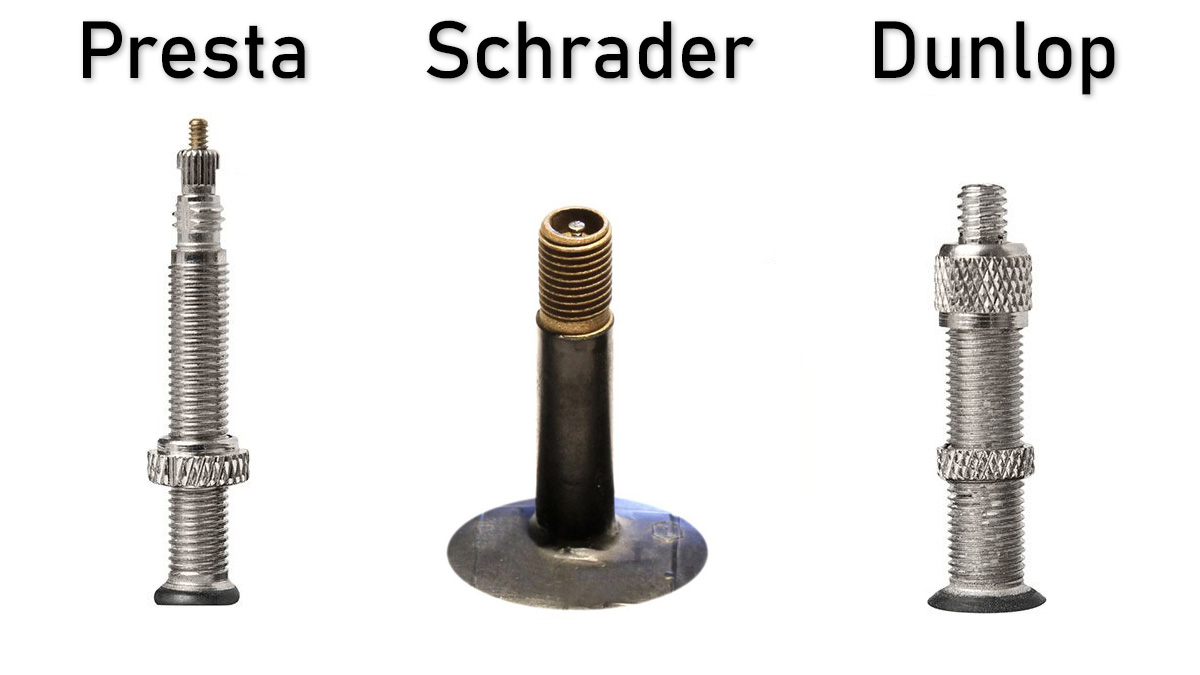 There are three main types of valves for bicycles: Presta, Schrader, and Dunlop. In this article, we discuss the Presta vs Shrader valve. Each valve works similarly – air pressure inside the tube keeps the valve closed, and you can release air by pushing the valve core inwards with a fingernail or small object.

When filling the tire up, you must hold the pump attachment onto the valve securely so you can pump air in without it escaping.

Clincher vs Tubular vs Tubeless Tires — All Differences Explained

What Is a Presta Valve? 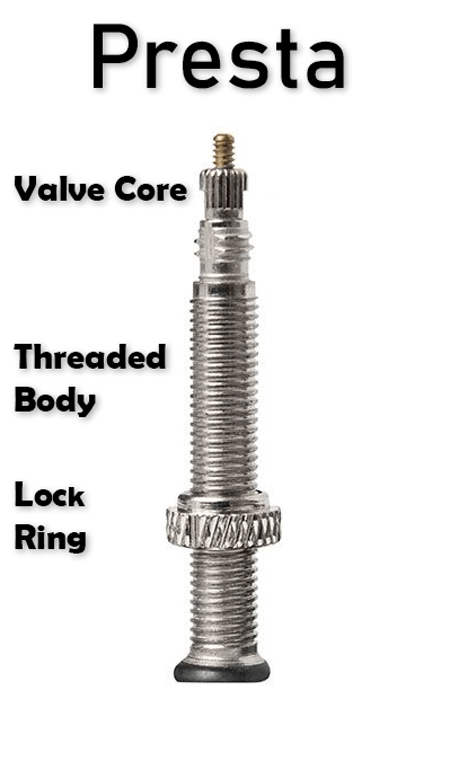 The Presta valve is commonly found on thinner tubes used for road bikes, touring bikes, fixies, and track bikes. However, some high-end mountain bikes have recently begun using Presta valves, especially ones with tubeless tires. Presta works better as a tubeless tire valve stem since it’s smaller and easier to secure in place.

Presta valves are thinner, lighter, and more fragile than Schrader valves, with better airflow control. They are popular on road bikes because they only require a small hole in the rim, meaning manufacturers can make thinner rims with lighter materials.

Unlike a Schrader valve, a Presta valve has an additional screw nut attached to the valve core to stop dust from getting in. This must be unscrewed along with the Presta valve caps when inflating a Presta tube.

What Is a Schrader Valve?

The Schrader bike valve is one of the most well-known valves found on mountain bikes, BMXs, hybrids, e-bikes, and a host of other bicycle types. Even motorbikes, automobiles, and aircraft use the Schrader-style valve on their tires. They are the toughest, most affordable, and most widely used valves in the world.

The Schrader valve is characterized by a wide, round barrel tube with screw markings down the sides and a small valve core in the center. The screw-on sides are used to secure a valve cap or attach a screw-on pump head for a tighter fit. A spring within the Schrader valve core keeps it compressed so air can’t escape, and is depressed when a pump head is attached.

Are Dunlop Valves Still in Use? 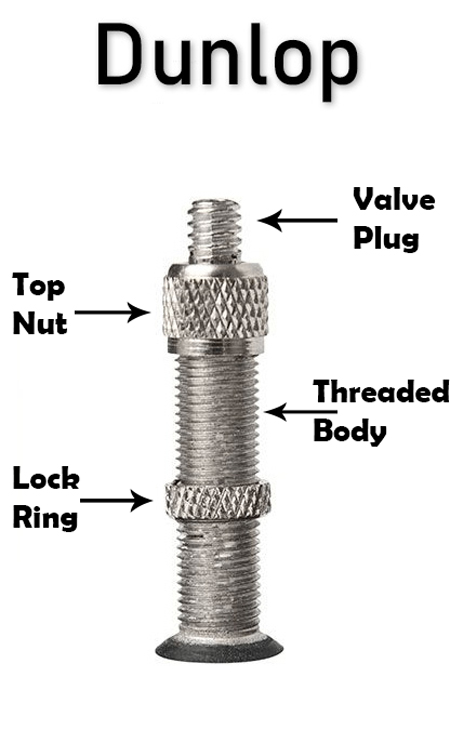 Dunlop valves are a rare type of bicycle tire valve that is practically non-existent in the US, and only seldomly used in Europe and parts of Asia. Its base is similar in size to a Schrader valve but with a pneumatic stem that is forced open by air when pumping. This makes it difficult to pump and almost impossible to control the airflow.

Although a new version with a spring-loaded stem is now available, Dunlop valves are rarely seen on modern bicycles. For this reason, we will only discuss Schrader and Presta valves in this article.

Presta vs. Schrader Valves: How Do They Differ? 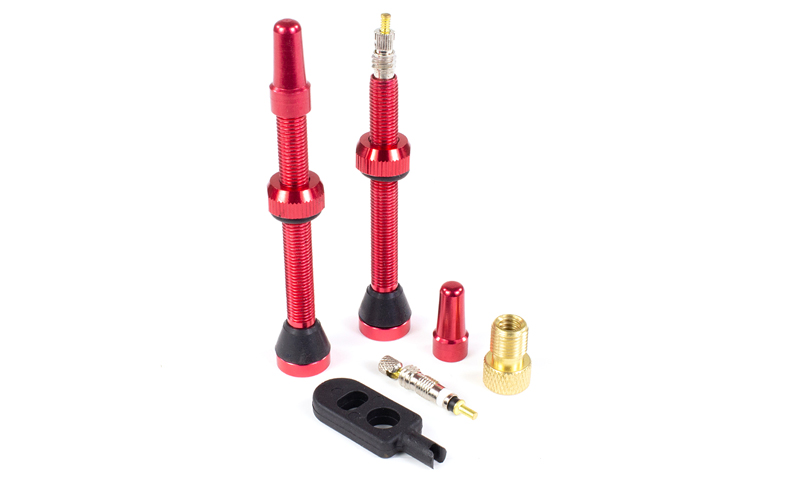 The fundamental difference between the Schrader valve vs Presta valve is the size and weight, with the much lighter Presta requiring a considerably smaller hole in the wheel rim. This may seem inconsequential but it makes a big difference on super-light carbon fiber wheels.

It’s also easier to control airflow on a Presta valve, making it possible to set your tires to a very precise pressure. This is because the valve head closes almost instantly, leaving no gaps for air to escape.

Should You Use a Presta Valve or a Schrader Valve? 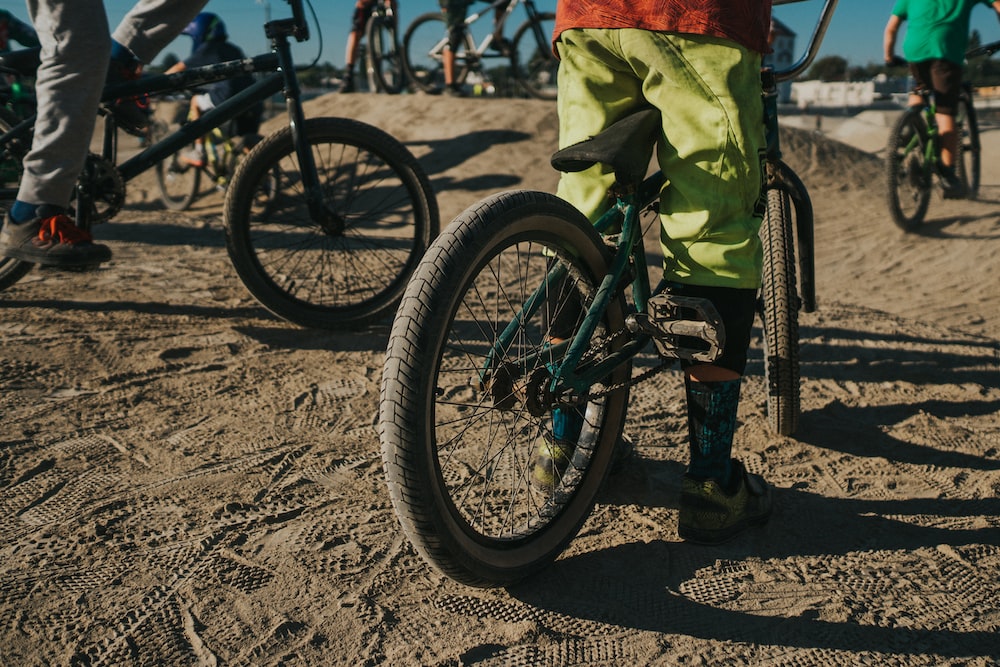 Most bicycles come with rims that only take one valve or the other, so in most cases, you don’t have a choice; unless you plan to replace your rims. If you get a road bike, it’ll ideally come with Presta valves, whereas a hybrid or MTB will probably come with Schrader valves.

However, there are some situations in which you may wish to change your valves. If you have a road bike that you plan to do long-distance touring on, it could be beneficial to change to rims that fit Schrader valves.

If you’re a serious mountain biker, you may wish to change to Presta valves to save on weight or better regulate the air in your tires. In short, Schrader valves are cheaper, stronger, and more available, but if you have specific requirements you could benefit from using Presta valves.

How to Inflate a Presta Valve and a Schrader Valve? 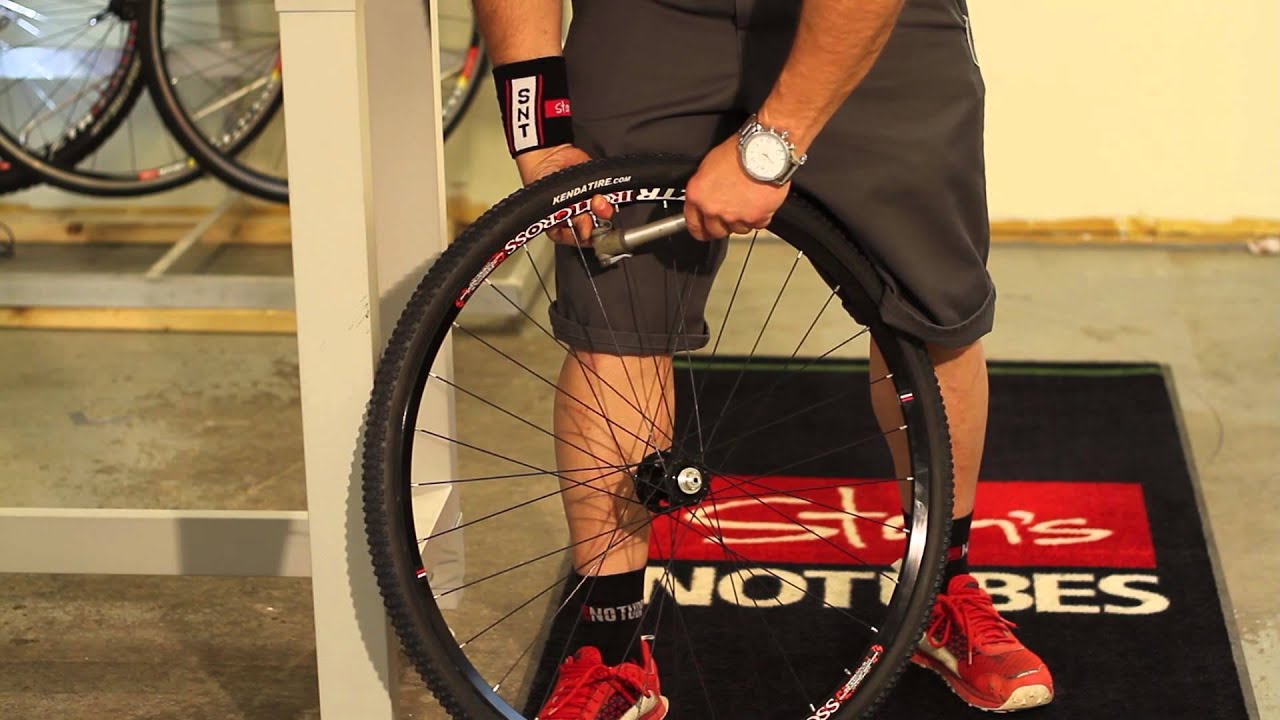 Inflating a tire or tube using both Presta and Schrader valves is fairly simple, but there are some important things to pay attention to if you don’t want to encounter any issues down the road.

How to use a Schrader valve

Schrader valves are the easiest valves to operate, which is why they are so widely used, even on children’s bicycles. Follow these steps to pump up your tires using a Schrader valve:

How to use a Presta valve

Presta valves are slightly more complex than Schrader but follow the same basic idea. These are the steps to pump up a Presta valve tube:

Valves work in the same way whether on tubes or in a tubeless bike setup, the only difference is that a tubeless valve is attached directly to the rim rather than a tube. Presta valves are typically the preferred tubeless tire valve, but you can also use a fully threaded Schrader valve. 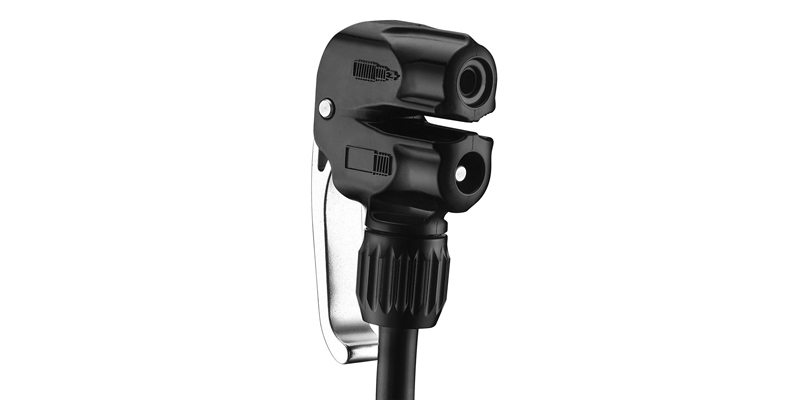 There’s very little difference when it comes to the mechanics of a Schrader valve vs Presta valve pump. Both use a tube-shaped air chamber with a handheld compressor or foot pump to push air through the hose and into the valve.

A bicycle pump is one of the single most crucial extras for any cyclist out there, after a helmet obviously. ...
Read full review

The only real difference is at the valve connector, the bit which you attach or hold against the valve when pumping. A Schrader pump has a larger head to fit the wider barrel of the Schrader valve, whereas Presta pumps have a smaller hole.

These days, most foot pumps have a dual-head fitting for both Presta and Schrader, and most mini-pumps have a removable adapter head that can be flipped around to fit one or the other.

Presta vs. Schrader Valve Adapter: Do You Need One? 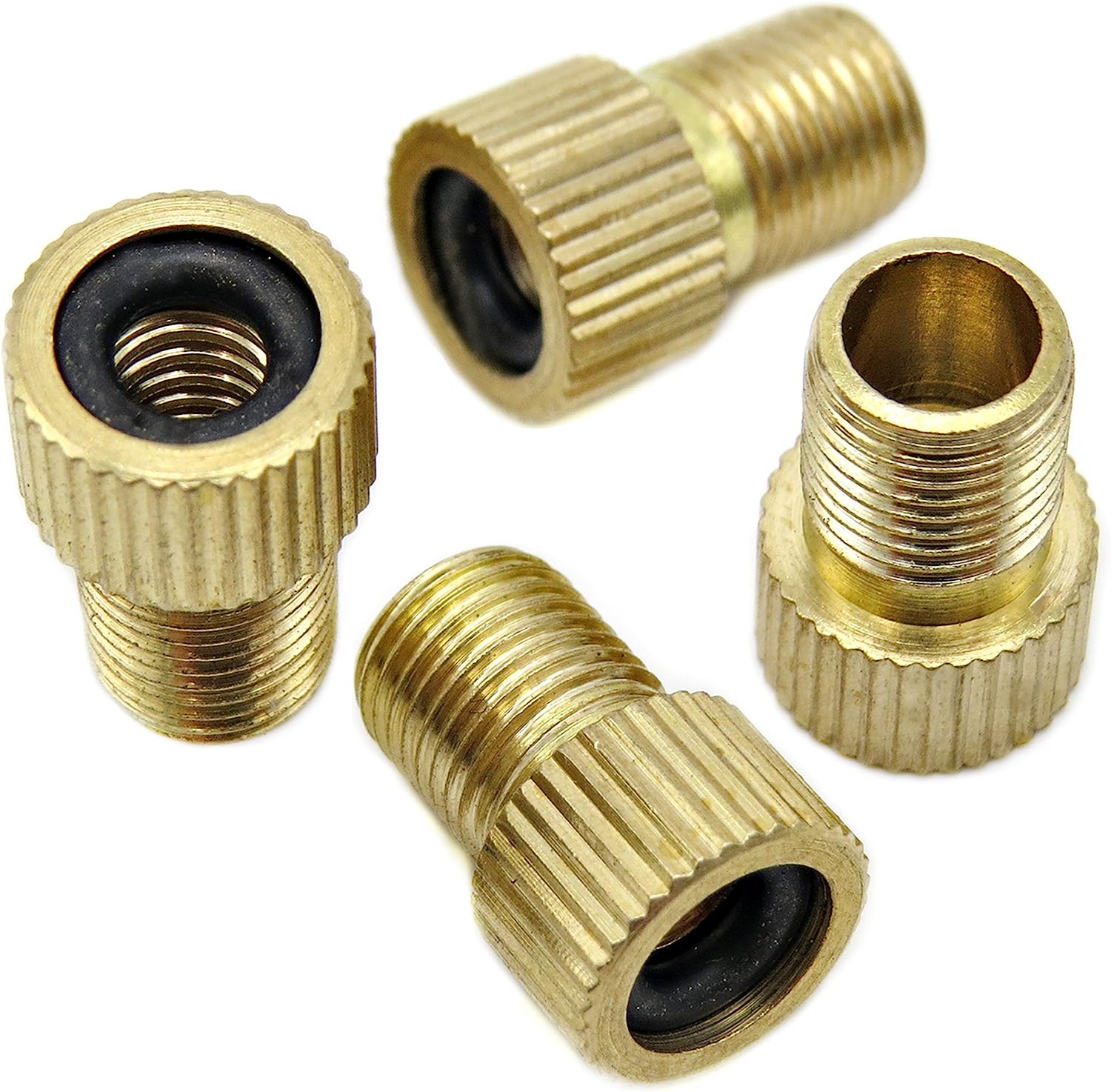 As mentioned, most pumps come with an adapter or dual-head for both Schrader and Presta, but unless you have multiple bicycles, you probably won’t need both. However, it never hurts to keep a dual-head pump or valve adapter with you in case you encounter somebody on the road who needs to borrow your pump. Many Presta tubes come with a Presta to Schrader valve adapter.

Additionally, it could be beneficial for road cyclists to carry a Presta to Schrader adapter in addition to a mini pump. The reason is that it’s hard to reach high tire pressure (~100 psi) with a mini pump, so an adapter would allow you to do so with an air compressor at a service station.

Can You Use a Wrong Tube in Your Tire?

Tubes are made of very stretchy rubber, so they’re quite flexible when it comes to sizes. It’s best to always use the correct tube size for your tires, but in emergencies, you can use a tube of a slightly different size. For example, a 700x25c tube could work in a 700x32c tire, but anything larger than that (i.e. 700x40c) could be an issue.

Similarly, a 27.5″ tube could work in a 29″ tire, but stretching a 26″ tube to a 29″ tire could give you issues. If you have to use an incorrect size tube in an emergency, change it to the correct size as soon as possible.

What is a Schrader valve?

A Schrader valve is the most commonly used bicycle tire valve, found on most MTBs, hybrids, city bikes, and e-bikes. It is stronger and more robust than a Presta valve, but it is also wider so it’s not very practical for narrow rims.

What is a Presta valve?

Presta valves are newer, lighter, and more expensive valves commonly found on road bikes, but many modern mountain bikes use them as well. They can withstand higher air pressures than Schrader valves and require a thinner hole in the rim which makes the wheel structurally stronger.

How to pump a Schrader valve?

In order to pump a Schrader valve, you first need to unscrew the valve cap, release a bit of air to clear any dirt or dust and then hold the pump hose in place. Pump the tire until the desired pressure is reached and replace the cap.

How to inflate a Presta valve?

How to remove a Schrader valve?

You can unscrew the valve core of a Schrader valve using a special removal tool or needle-nose pliers. Some bicycle tire valve caps come with a built-in core removal tool. Keep in mind that the tire will deflate rapidly once the core is removed.

How to remove a Presta valve core?

You can unscrew the valve core of a Presta valve using a special tool or needle-nose pliers. Be careful not to drop the valve core into the inside of the tube. Also, keep in mind that the tire will deflate rapidly once removed.

How to use a Presta valve adapter?

A Presta valve adapter simply screws onto a Presta valve, making it larger and possible to use with a Schrader pump. Be sure to unscrew the Presta valve core nut before attaching an adapter, because otherwise, air won’t be able to enter the tube.

Do you need a special pump for Presta valves?

You can use any pump with a Presta valve if you have a valve adapter. Otherwise, you will need a Presta-specific pump, a pump with a bike pump adapter, or a pump with both valve types on the hose.