Women’s mountain bikes have been around since 1999 when Juli Furtado designed the first-ever women’s specific mountain bike under the umbrella of the Santa Cruz brand.

Female mountain bikers had been riding long before that, however, with Furtado herself being the most successful XC racer in history until her early retirement. Since the launch of the Juliana brand, other manufacturers have taken note and have slowly come around to the idea of producing women’s mountain bikes.

In this article, we’ll talk through what the differences are in women’s mountain bike frames compared to men’s, and some of the best ones you can get started on in the different disciplines and categories. That way you can decide whether you need a female-specific mountain bike or not.

If there’s a bike you’d like to see that you think we’ve missed, drop us a comment below! 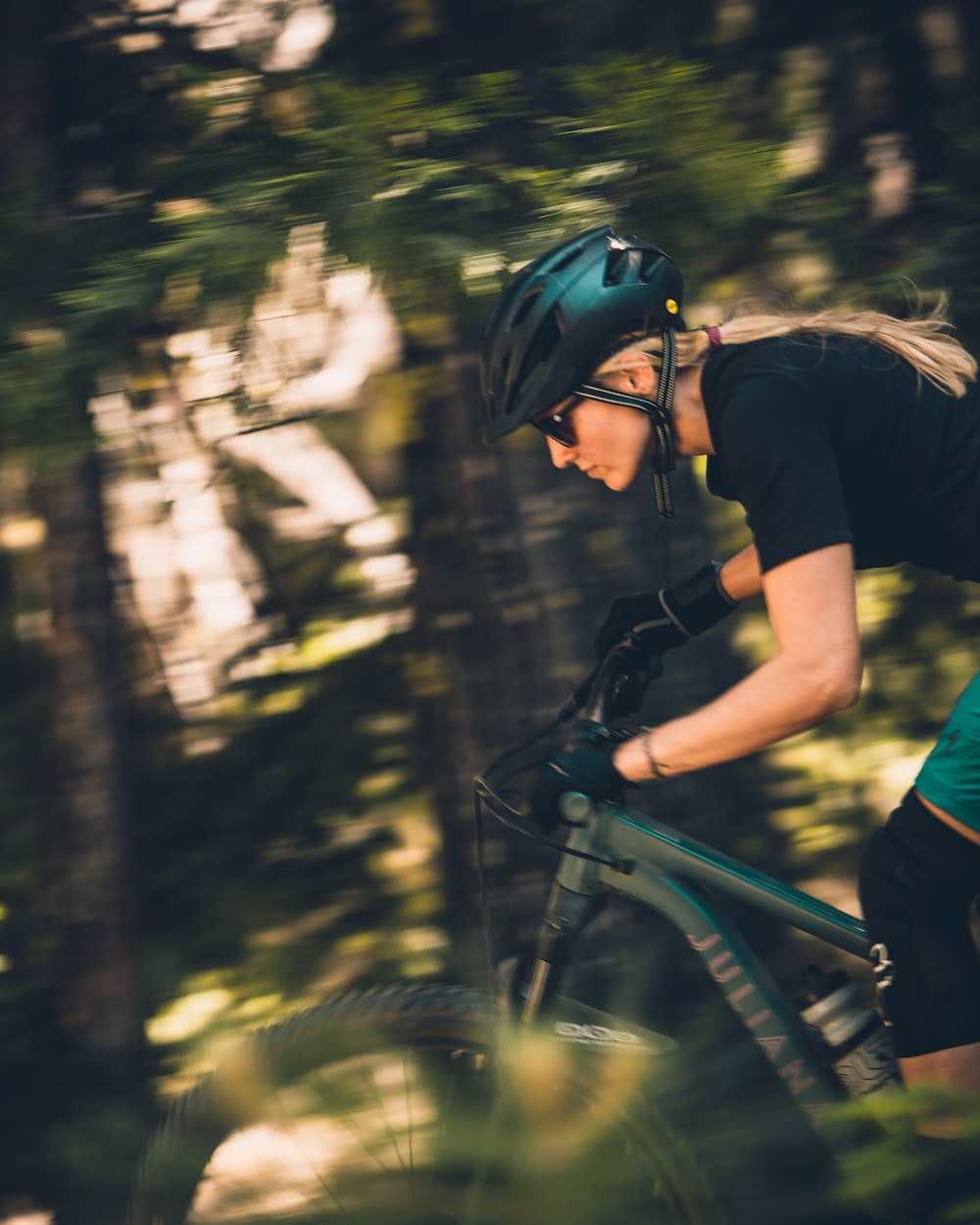 Full-suspension bikes are extremely versatile and can range from XC bikes to hard-wearing downhill bikes.

There’s definitely something for everyone with a full-suspension bike and thanks to brands such as Juliana there are more and more women’s bikes available in these categories. They may not all have obvious differences in their geometry, but with a women’s specific bike you’ll get a finishing kit like a saddle or handlebars that are more tailored to the female body.

Have a look at some of the best full-suspension women’s mountain bikes we’ve picked out.

A trail and all-mountain carbon-framed beast 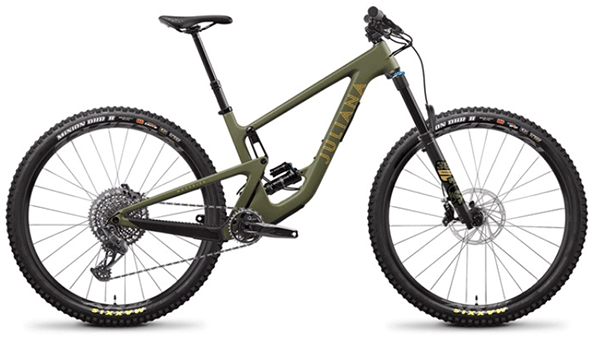 First on the list of our best full-suspension MTBs is the Juliana Maverick C S.

With 140mm of rear and 150mm of front travel, this carbon bike is an all-mountain and trail beast. The 29″ wheels eat up obstacles and technical trails so you can focus on your speed. Using Santa Cruz‘s patented VPP suspension system it’s easy to tune the bike to your needs.

The geometry is adaptable and can be changed using the flip-switch to make the headtube slacker and drop the bottom bracket height for extra stability. Overall, it’s a fantastic women’s specific full-suspension bike that will take you from the bike park to winning races.

Featuring the long, slack geometry we’ve all come to love over recent years, the Cannondale Habit 5 is a great example of a women-specific trail bike.

With plenty of travel for trail riding, Cannondale uses its clever Proportional Response technology to set up the suspension on each bike specifically to the weight of the rider. This optimizes performance on the bike by allowing you to tailor your experience and soak up the bumps yet keep it responsive.

At home on the trails or off-piste, this is one gnarly yet stable trail bike for women.

Liv is a well-known women’s specific bike brand and has been producing bikes for over ten years under the umbrella of their male/unisex brand Giant.

The Liv Intrigue is a fast and agile trail bike designed around suspension that has been tuned for female riders over a wide data set provided by female athletes so you can get the most out of your trail bike. The 140/150mm travel and 27.5″ wheels provide a fantastic platform for you to blast through the trail center or whip the bike around the natural landscape.

This aluminum framed full-suspension bike is a great all-rounder for women who want to get more out of their mountain biking. The Cannondale Jekyll is a fine example of a women’s enduro bike.

The carbon-framed beauty features 150mm of front and rear suspension making a perfectly balanced bike that’s not only superbly quick downhill but is lightweight enough to climb on too – no longer will you need to use the uplift after doing the black run.

A lightweight yet powerful bike built for performance and racing, the Cannondale Jekyll is a great enduro bike for those looking to get into racing, or for those who want to get the most out of their riding.

Hardtails are a great way to get into mountain biking without the maintenance requirements of a full-suspension setup.

They have front suspension forks usually up to around 120mm of travel, and rigid rear triangles. They are fantastic for learning tricks and getting the basics of your riding down before you progress to a heavier and more hardcore full-suspension bike.

Have a look at some of the best women’s hardtail mountain bikes we’ve listed below.

Designed completely around the female body, Co-op Cycles have built a hardtail with a shorter top tube and stem than the male equivalent. They’ve also included narrower handlebars and a female-specific saddle to enhance your comfort on the bike.

With 100mm of travel, this bike is ideal for zipping around the bike park or a leisurely trail ride with family and friends.

A cross-country hardtail with an efficient ride

The Marlin 6 is one of many Trek women’s mountain bikes the brand produces.

The American brand is a sponsor of a world-class XC team and thus knows exactly how to produce a bike suitable for females whether they are racers or leisure riders. Although built for mountain biking, it’s perfectly capable as a bikepacking rig or commuter bike as it has plenty of mounting points for luggage and bottles.

With 100mm forks and a lightweight aluminum frame, this is a versatile female-oriented bike that is a perfect introduction to the world of mountain biking.

A hardtail designed for the female trail enthusiast 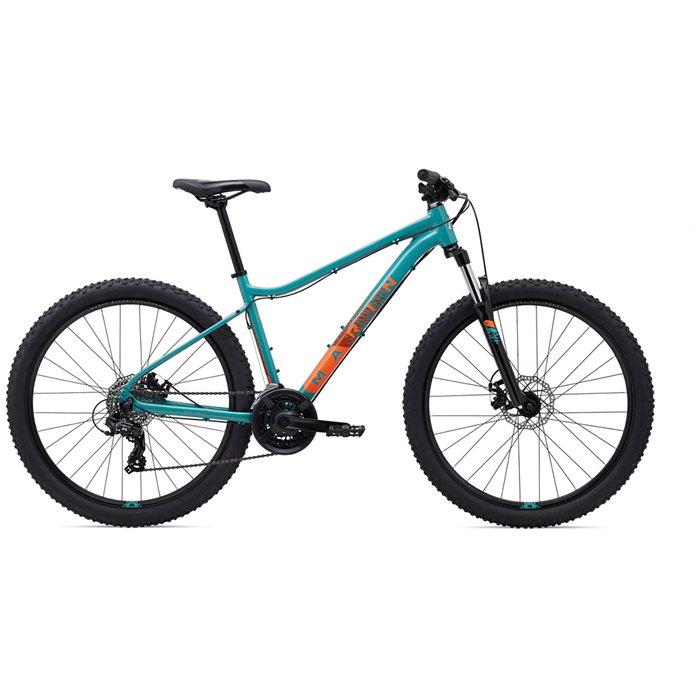 Another fantastic example of a women’s hardtail mountain bike is the Marin Wildcat Trail 3.

The 3 and 5 in the series are dedicated to the female rider, with slightly altered geometry to suit the female shape better on the bike. Hydraulic brakes and 100mm of travel make this an extremely capable bike on the rough stuff while keeping it comfortable and accessible.

With 27.5″ wheels, this bike is agile, handles well, and makes a perfect bike to ride on the trails or with family.

A budget bike with 26″ wheels, a great entry-level option 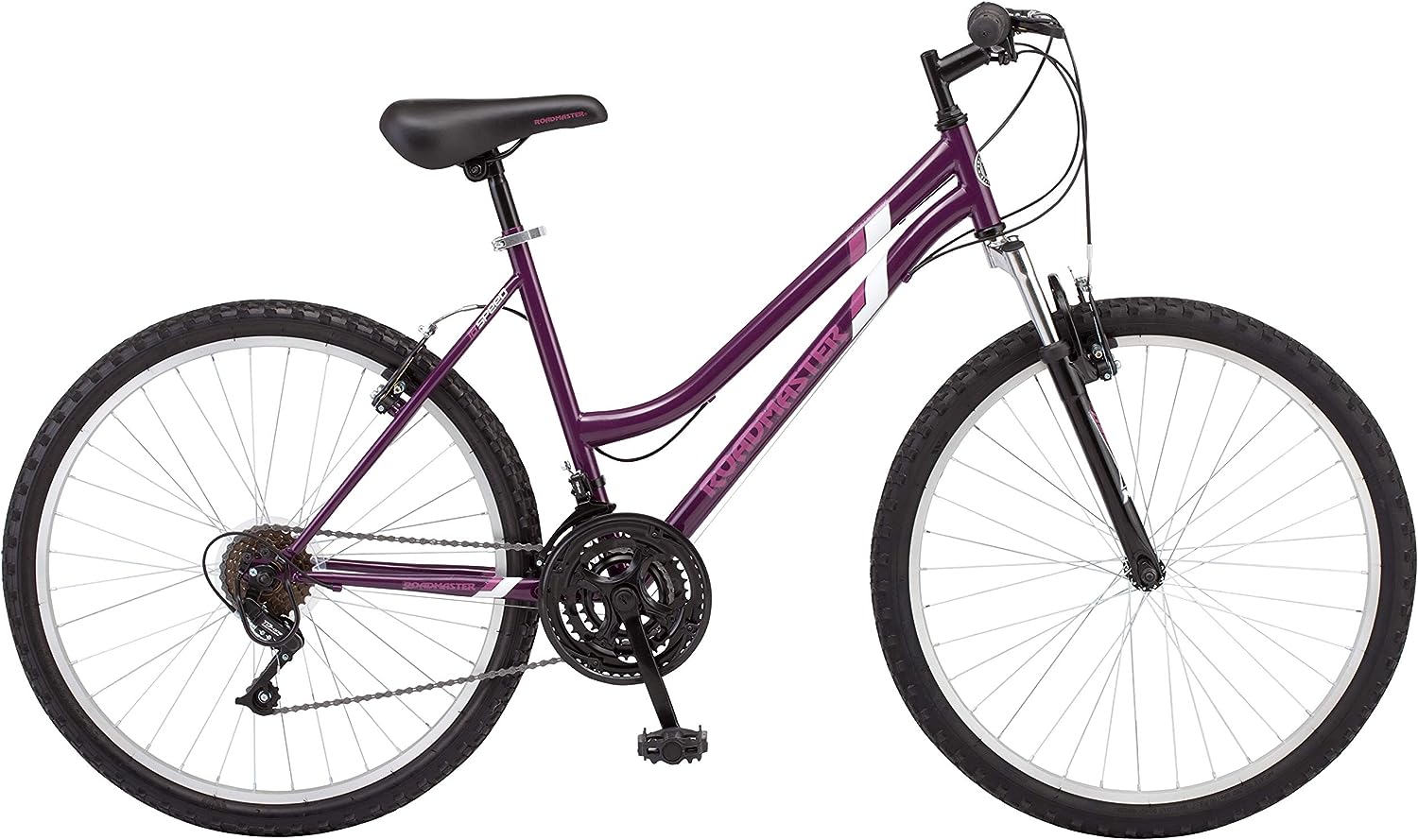 Not particularly the best, but it has received a noticeable score on Amazon. Best suited for those who are looking for a mountain-inspired MTB at the lowest possible budget.

As we said before, 26″ wheels are less common than they used to be on new mountain bikes, but only because the industry is moving towards bigger and slacker. A 26″ wheel bike is still extremely capable it just won’t be best suited to a black diamond trail.

This particular bike has a steel frame and a suspension fork to smooth out any bumps and lumps you might come across whether you’re on the trail or out riding with family and friends.

Differences Between Men’s and Women’s Bikes

Although the introduction of women’s specific bikes and geometry somewhat ballooned in the early 2000s, many brands are now moving away from that viewpoint and suggesting that a bike should be chosen based on the rider, not the gender.

The typical women’s MTB geometry was designed around the idea that women have shorter torsos but longer legs than male riders. This led to several brands building bikes with a shorter reach but taller front end, or a shallower fork angle.

Although this more upright riding position can help get people comfortable on a mountain bike, the more technical and fast the trails, the more of a racing position you want to adapt to be able to handle the bike well and keep it stable.

In recent years, men’s bike geometry, in particular, has embraced progressive frame layouts and in many cases lengthened the wheelbases and slackened the headtubes for more stability (of course, this depends on the bike and desired riding purpose). But have women’s bikes kept up? The Juliana brand no longer believes there should be a discrepancy between men’s and women’s frames, and instead, designs the frame based on smaller differences such as weight. The finishing kit is also tailored to the smaller rider with narrower bars and suspension setups for lighter riders.

What you may find is that the higher-end female-specific bikes look remarkably like their male or unisex counterparts. Many brands are abandoning the idea of female-specific geometries altogether, and have increased their frame size range to suit a wider breadth of rider heights. Of course, at the lower end of the scale, there still are noticeable differences including sloping top tubes and a shorter reach.

Whether or not you think you need a female-specific bike is down to your individual geometry, but we’d always recommend trying a test ride if possible before purchasing, or at the very least, accurately measuring yourself to find the correct sized bike – unisex or female-specific.

Just like men’s or unisex bikes, there are several wheel sizes you might find on a women’s specific mountain bike.

As with men’s bikes, women’s mountain bikes come in several categories, and within each category is a typical amount of suspension travel you can expect to find on the bike.

We’ve listed them below and explained the differences: