The State Bicycle Company was founded in 2009 and aims to get more people on bikes by providing fun bikes to ride.

Largely known as a fixie bikes brand, they have also brought to market city bikes, track-style bikes, geared bikes, and a wide range of components and apparel. They aim to produce high-quality but affordable cycling goods that anyone can use. They are keen to only put out products that they would use themselves.

They work in an interesting way, by releasing each bike as a limited edition. They produce only so many and once they’re gone, that’s it. They have previously launched a racing team and support grassroots cycling as well as encourage ordinary people to find joy in cycling. It’s this ethos and high-quality bikes that have led to the State Bicycle Co reviews being so positive.

Their warehouse and headquarters are currently in Phoenix, Arizona but they have distributors across the US and the world, including the UK and Europe.

3 factors that stood out from our perspective

It is quite uncommon to see such a popular bike brand use its own line of components.

In our opinion, State Bicycles has mastered the art of visual expression (much like Surly bikes). Their bikes are well photographed which in turn works great for advertising & marketing.

Back in the day people preferred to see the bikes in person or relied heavily on ratings and reviews, but we believe that State Bicycle Co. has made superb improvements in getting the feel of the bike to the customers.

State Bicycle has a great section of archived bikes. Read more from the Retired models page.

This collection with the National Park Foundation celebrates the USA’s National Parks. Each bike is inspired by a park and a portion of the proceeds from the sale of these bikes goes towards the funds that help protect the parks and keep them preserved.

The State Bicycle Co. partnered with the band Grateful Dead to produce a collection of themed apparel and accessories. Each piece has an iconic symbol from the band’s history incorporated in the design.

The State Bicycle Co. Astronaut Collection is inspired by NASA and our other worldly feats. The collection contains clothing and components for your bike each adorned with oil slick or space-inspired designs. 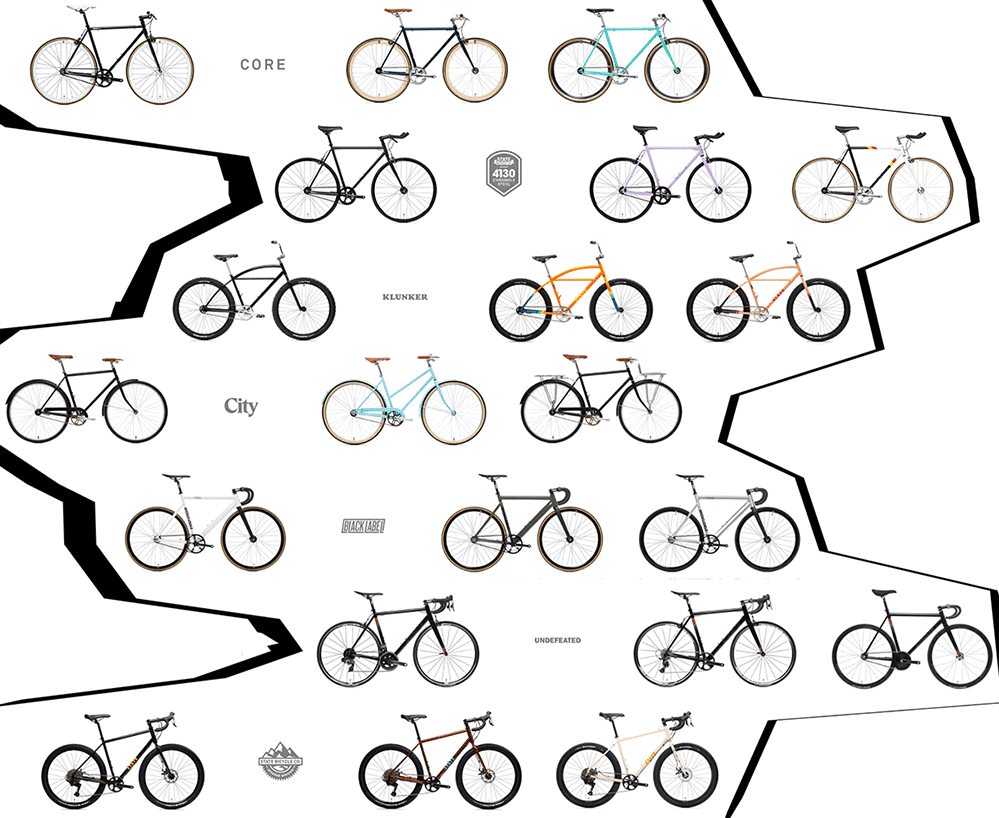 The Core Line is the essence of the State Bicycle Co.

It takes what they’re known for best and improves upon it in an extremely affordable way. All bikes are priced at $399 which helps with their aim of making cycling more accessible. The Core Line was built with this primarily in mind – making cycling affordable and accessible to people who otherwise might not be able to buy a bicycle.

But a low cost doesn’t mean that the quality is low with State Bicycle Co. in fact, it’s far from it. For $399, you can buy a steel-framed bike with quality components and a flip-flop hub. This makes it easy to change between riding fixed gear or freewheel. In addition, all of this is topped off with stylish Vans (yes, like the shoes) grips, and a five-year warranty.

These State Bicycle single speed bicycles come in several varied paint schemes so you can personalize your riding experience. Whether this is your first bike investment or you’re looking for a cheap run around bike, the Core Line should certainly be considered.

A Year With Core – State Bicycle Review on Reddit

These bikes are great for first-time cyclists or even those who are experienced and are looking for another bike to add to their stable.

Ideal as a run around bike or something to do the errands on, their affordability doesn’t detract from the quality of the build. 4130 refers to a Chromoly steel grade on the frame & fork.

The State Bicycle Co. 4130 line refers to the 4130-grade Chromoly steel used as the frame material.

There are a wide number of types and styles of bikes in this line, including State Bicycle Co 4130 road bikes, single speed commuter bikes and women’s fixie bikes to name a few. Each bicycle in this range comes with sealed hubs, which are perfect for those of us that prefer to do as little bike maintenance as possible! Sealed hubs are essentially fit and forget hubs, so you won’t need to regrease them or worry about splines and that sort of thing for many years.

They also come with lightweight components, such as on the State Bicycle 4130 road bikes which include lightweight wide wheel rims that can accommodate tires up to 32mm wide. Additionally, double-butted tubing means these bikes are strong and durable and paired with the magnificent array of colors and paint schemes mean you’ll get an almost unique bike.

As with any other line of bicycle, State Bicycle Co. runs a limited amount of bikes in this range and once they’re sold out, retire them for good. So if you want one, you had better act fast!

These bikes are still extremely affordable, with prices starting at $459. There are multiple types of bikes on offer in this range, so they have something to suit all riders. Whether you’re a die-hard roadie that wants a quality steel frame, or a gravel rider that wants to take their ride off-road.

A 4130 bike is a bike made from 4130 steel. You can see the collection on the State Bicycle Co. website through the link below.

The State Bicycle 6061 Black Label range is a range of aluminum bikes, denoted by the 6061 tags.

6061 is a type of lightweight aluminum, first used in aeronautical operations and now used by bicycle builders and frame manufacturers throughout the world. These bikes are often responsive and comfortable, while also being incredibly durable and able to withstand knocks and bumps.

Like many of their other bikes, the State Bicycle 6061 Black Label reviews have been largely positive, with customers expressing how comfortable and agile their bikes are. Again, these are quite affordable too, so that’s always a bonus with your consumer base!

Another positive from this range is the State Bicycle 6061  Black Label weight. The frames weigh between 5lb 3oz for a size 49cm, and 5lb 11oz for a size 62cm. This is incredibly lightweight and means the bike retains its agility and great handling even when components are added.

Like other ranges, there are some fantastic color choices to be had. This includes the ULTRA-LIMITED “1-RUN” colorways which are only made once, so if you are keen to have a unique build, this is an affordable place to start.

Great for track riders or gravel bike/all-road riders who are looking for their first aluminum or competition bicycle.

The State Bicycle Co. Klunker range is something for the quirky riders among us.

The bikes are a mashup of single-speed, mountain bike, and cruiser bicycle, all put together in one neat package. Whether you’re a fixie rider or a leisure rider that likes to cycle down at the beach – or at least pretend like you are, then there is a Klunker bike for you.

They are retro-inspired but with modern components and frame building techniques. You can get the best out of both worlds this way – style and quality. Sticking to the brand’s accessibility and affordability ethos, all of the Klunker bikes are available below $500.

With quality steel frame construction and stylish grips and paint jobs, there’s not much to dislike about this range from State Bicycle Co.

Is the Klunker for anyone?

Not everyone can pull off the style of this bike. It takes a special kind of person who enjoys the bike as much as the bike likes the rider. The designs are whacky and you’ll certainly turn heads, but these bikes are versatile and are as much at home at the beach as they are on the BMX pump track or riding to the shops – the opportunities are endless.

What is a Klunker Bike? 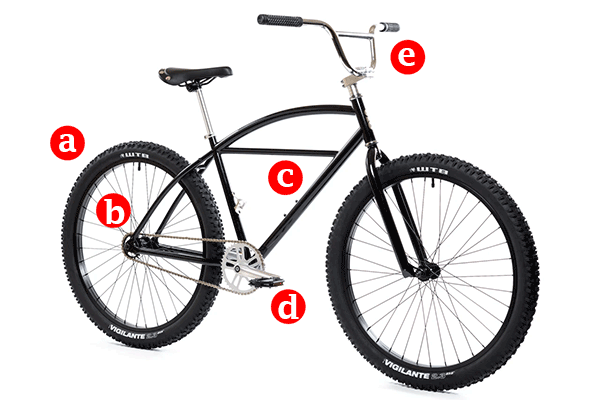 State street bicycles are equipped with fenders and a rack on the front.

People have differing opinions on what makes a bike a city bike, but we think that the title is best given to bikes that can attach luggage and are comfortable enough to be used without the need for lycra or specialist clothing.

The State Bicycle Company City range contains bikes with two main frame styles, the ‘Dutch Style’ with the dropped top tube to make more of a step-thru frame, and the step-over frame which looks more like a regular road bike. They have created bikes with relaxed geometries and a choice of either single-speed or 3-speed gearing.

This combination of geometry and gear choice makes them a perfect sidekick for riding to class or the grocery store, in particular with the Elliston Deluxe model which comes with front and rear racks for baskets or panniers. Once again, the range is affordable as well as stylish, with the most expensive model coming in at under $600.

The City range is perfect for anyone who wants a bike to get around on, we’re talking about getting to college, to work, to the grocery store. It’s a bike but stripped back to the bones. The State fixies are about the basics of cycling, getting you from A to B with minimal fuss. So if you’re after a new way of getting around town, these bikes are perfect.

The Undefeated features a selection of high-end single speed track bikes on a high-grade alloy frame and carbon fork. You’ll see State Bicycle’s own top-quality components and designs used along this series only.

Race-ready out of the box Although more known by their bikes for paved roads- State Bicycles has recently taken a successful leap into the world of gravel roads. At an affordable rate, you can find a variety of gravel bikes that not only look good – but perform in a matter they are design for. Fitted with knobby tires and gravel-geometry, there’s a lot that a rigid-frame-road-geometry bike is capable of. List of the most popular discontinued models so far –

State bicycles produce their own set of components which has helped them through the Covid19 shortage of parts worldwide. 4. Conclusions & FAQ – What to think of State Bicycles?

Out the box – Assembly

Who owns the State Bicycle Co?

State Bicycles is owned by the founder Mehdi Farsi.

Where is the State Bicycle Co located?

State Bicycle co is based out of Tempe, Arizona.

Read more about the effects – BicycleRetailer.com

When to expect an e-bike by State Bicycle?

So far we haven’t heard any news of State Bicycle Co. going electric, but we’ll make our best to be the first ones reveal it!

What about mountain bikes?

State Bicycles co has released a fixed gear mountain bike before, named Pulsar (Rigid) and Pulsar Deluxe (RockShox 100mm on the front). We’ll try our best to cover all State’s MTBs as soon as they’re being released!

If there’s anything to expect, it must be the 26-inch single-speed bike just like the Klunker above!

Gravel is there, how about CX?

At the moment, there are no State Bicycle CX bikes available.

State Bicycle has had a fat bike in their list – known as the Megalith.

What are other bike brands similar to State Bicycle?

Read more about the special edition.