The 7 Best US National Parks for Cycling: Part 1 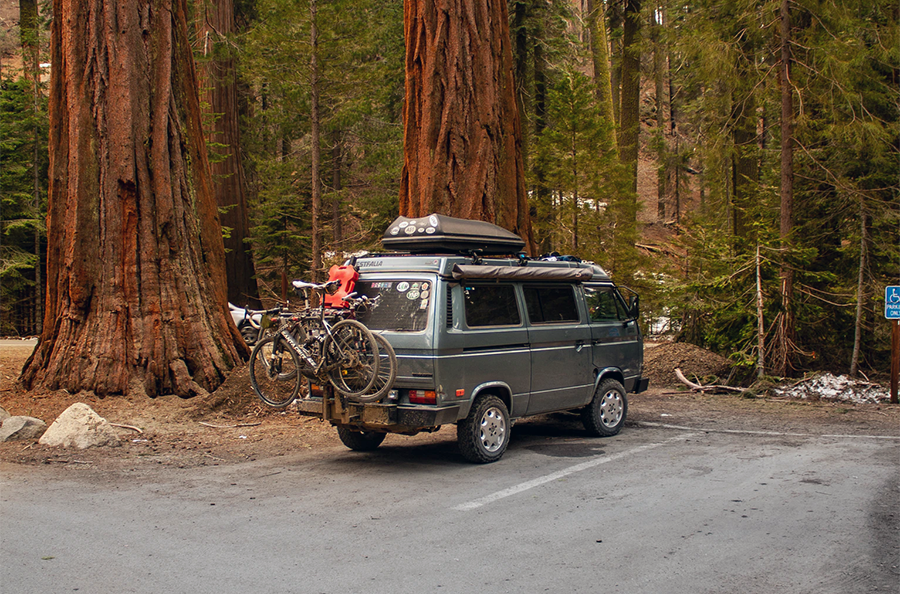 Not all of the national parks are bike-friendly, but there are at least 15 that have excellent paved road networks and often mountain bike trails. In part one of this article, we explore 7 of the best national parks for cycling and the key cycling roads and trails within each.

As of 2023, there are 63 protected national parks in the United States, drawing more than 80 million visitors each year. Designation as a national park ensures the dedicated conservation of its natural beauty, unique geological features, diverse ecosystems, abundant wildlife, and recreational opportunities.

Exploring the world by bicycle is one of the most rewarding things any cyclist can do,

and the road and trail infrastructure that the National Parks Service maintains provides the perfect opportunity to see the most beautiful places in North America in the most rewarding way, a truly unforgettable experience.

Many of these parks have guided bike tours, with professional guides and bike rentals to help you get the most out of your visit. Also be sure to check out the National Parks Service website before your visit for updated park guidelines, road closures, current seasonal conditions like snow or wildfire, and more information relevant to your trip.

If you plan on visiting more than one park over the course of a 12 month period, purchasing an annual parks pass grants access to more than 2,000 federal recreation sites for up to 1 year from the date of purchase. Each $80 pass covers entrance fees at national parks and national wildlife refuges along with day-use fees for a driver and all passengers in a personal vehicle at per vehicle fee areas (or up to four adults at sites that charge per person). Children age 15 or under are free.

Many national parks are subject to extreme weather conditions like snow, ice, and flooding, so some planning and preparation should be done to guarantee a fun experience.

Also important is respecting the local wildlife and to keep ample distance from any bears, moose, or bison. If exploring on a bicycle, detours may be necessary to avoid animals in their natural habitat.

Good bicycle safety etiquette applies and is even more important due to low visibility on narrow and winding roads. 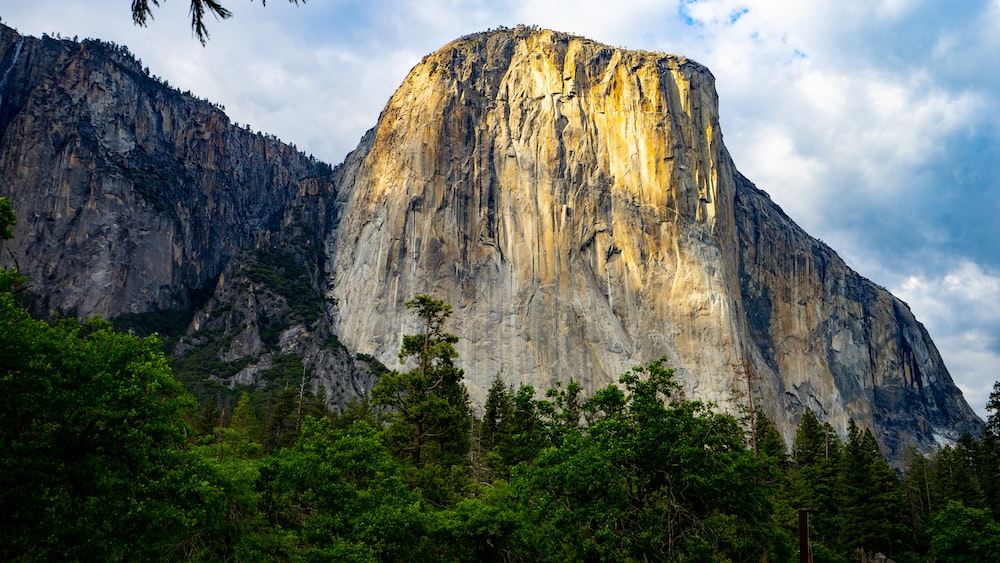 With over 4.5 million visitors in 2019, Yosemite National Park in California is an icon known worldwide, offering a spectacular mix of poignant granite cliffs, cascading waterfalls, and breathtaking viewpoints. The park is not traditionally recognized for its cycling trails, however, with so many unforgettable stops through the valley, and bike infrastructure like bicycle rentals and stations to lock your bike while you explore, seeing the park from two wheels is a cyclist’s dream.

In Yosemite Valley, there are 12 miles of paved bike paths that run past many of the park’s highlights, including El Capitan and Yosemite Falls. It is permitted to cycle on the paved roads of the park with regular traffic rules applying to both vehicles and cyclists.

Paved roads from the valley floor to Yosemite’s mountaintop viewpoint, Glacier Point, is 24 miles long with over 4000 feet of elevation gain and culminates in a spectacularly beautiful panoramic vista. On the way to Glacier Point, and only 8 miles from the visitor center is the famous ‘Tunnel View’: a fabulous view of El Capitan, Half Dome, and the majesty of Yosemite Valley.

For road cyclists or day-tourers cycling, Yosemite National Park is a fantastic way to explore its sites, but anyone seeking off-road trail riding or mountain biking are out of luck. Neither is permitted on the park’s trails. 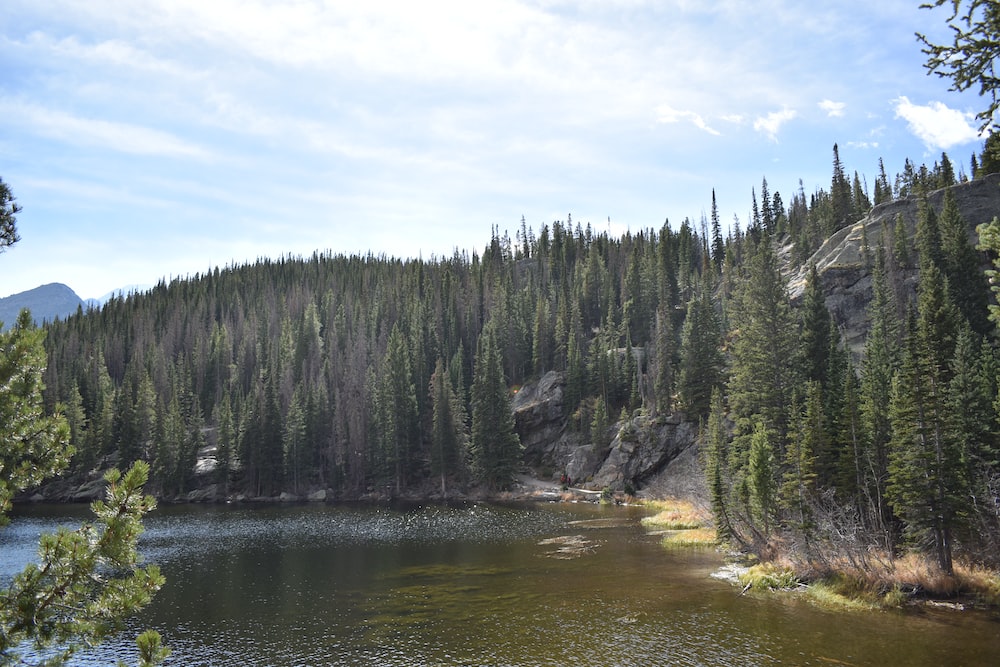 The Rocky Mountains are a key attraction in North America for their impressive peaks and high alpine forests. For cyclists, Trail Ridge Road is the main highlight of Colorado’s Rocky Mountain National Park, only open to bikes from April 1st – November 30th, due to extreme weather conditions at its elevation, peaking just over 12,180 feet.

Trail Ridge Road runs east to west, with a length of 48 miles, and an elevation gain of 4170 feet. The average gradient on the climb is 5%, sometimes reaching 7%, making it a challenging, though assuredly equally rewarding, ride. 11 miles are experienced above the tree line, and while the lack of trees does increase exposure to the elements, riders are greeted with stunning panoramic views of the nearby landscape.

It is generally recommended to visit during the shoulder seasons of spring and fall for the most bike-friendly experience, as the summer sees high volumes of visitors. Cyclists must ride in single file at all times, and regular road traffic rules apply in all other situations. Also, it is crucial to prepare for unexpected weather events. 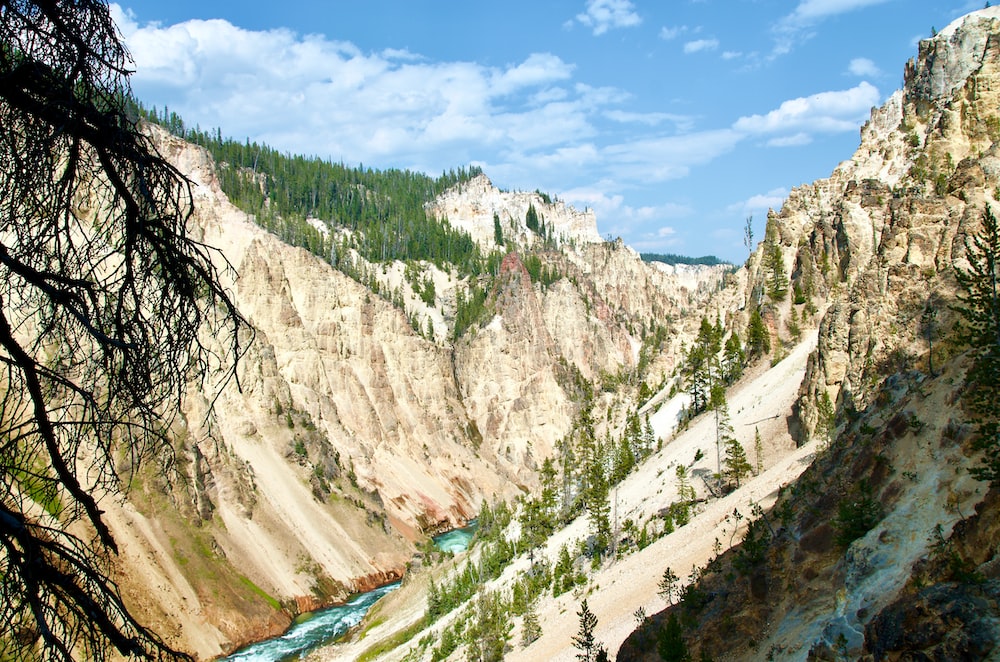 Four million people a year visit Wyoming’s Yellowstone, making it the USA’s sixth most visited national park. If you are willing to brave the elements in the park during springtime, with unpredictable road and weather conditions, there is a short period (usually between March and April) when you can cycle plowed roads that haven’t been opened to motor vehicles yet. This area runs for 49 miles from the West Entrance to Mammoth Hot Springs.

Mountain biking is hugely popular at Yellowstone, and there are nine mountain biking trails scattered throughout the park that range from 1 to 6 hours in duration. These trails are open in summer and fall, and offer a complete experience of the park, passing all of the major highlights.

The National Parks Service recommends that cyclists exercise caution when riding on park roads, especially during peak visitor season in the summer. Vehicle traffic at this time can be heavy and “the park’s winding, narrow roads offer poor visibility and narrow (or nonexistent) shoulders”. There are no bicycle paths along roadways, so use good bicycle etiquette and safety protocol to stay safe. 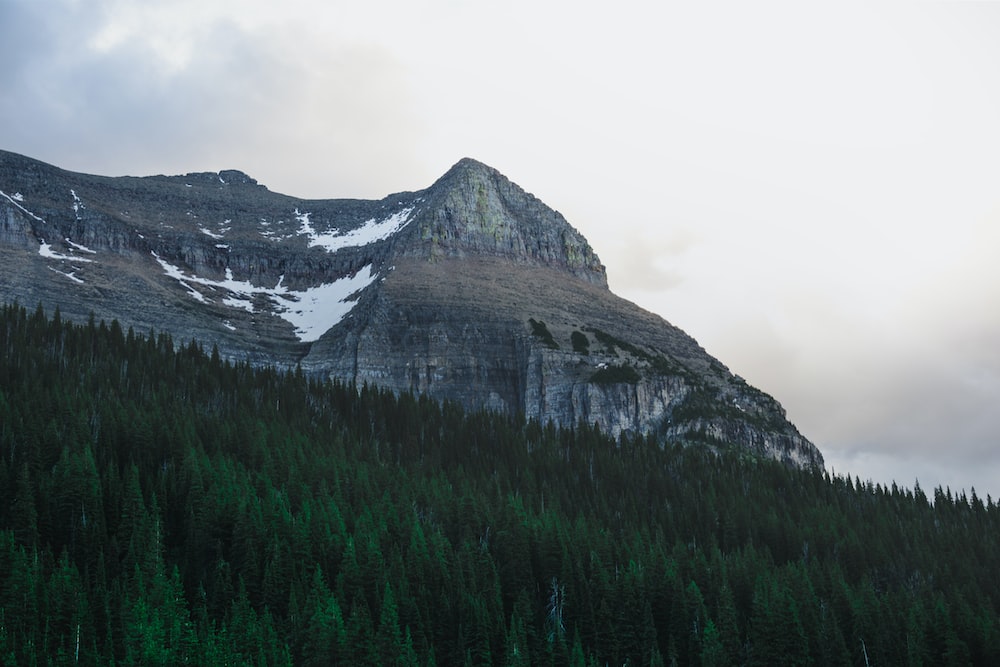 Cycling in Montana’s Glacier National Park is one of the most unique biking experiences in the USA. The Going-to-the-Sun road stretches 50 miles, starting with a gradual 32-mile climb from Apgar Visitors Centre at the west side of the park, over Logan’s Pass at an elevation of 6,646ft, followed by a long descent to the east entrance.

Glacier National Park is completely unique in its diversity, demonstrated by its namesake: the colossal glacial features, soaring mountain peaks (more than one hundred above 8,000 feet), a scattering of pristine lakes (130 named lakes), vast coniferous forests, and an abundance of wildlife. This spectacular assortment of features is unmatched in the United States and much of the world, making the park a must-see.

Like Yellowstone, Glacier has a period during spring when the road is closed to motorized traffic but open to cyclists (you can check the road status here), making this a popular period for visitors on two wheels.

Road rules for cyclists are more particular here. From June 15th through Labor Day, between 11 am and 4 pm, bicycles are forbidden in the section of the Going-to-the-Sun Road from Apgar Campground to Sprague Creek Campground in both directions, and Logan Creek to Logan Pass east-bound only, so getting started early is important. Otherwise, bikes are allowed on all roads in the park, excluding trails, with three exceptions: 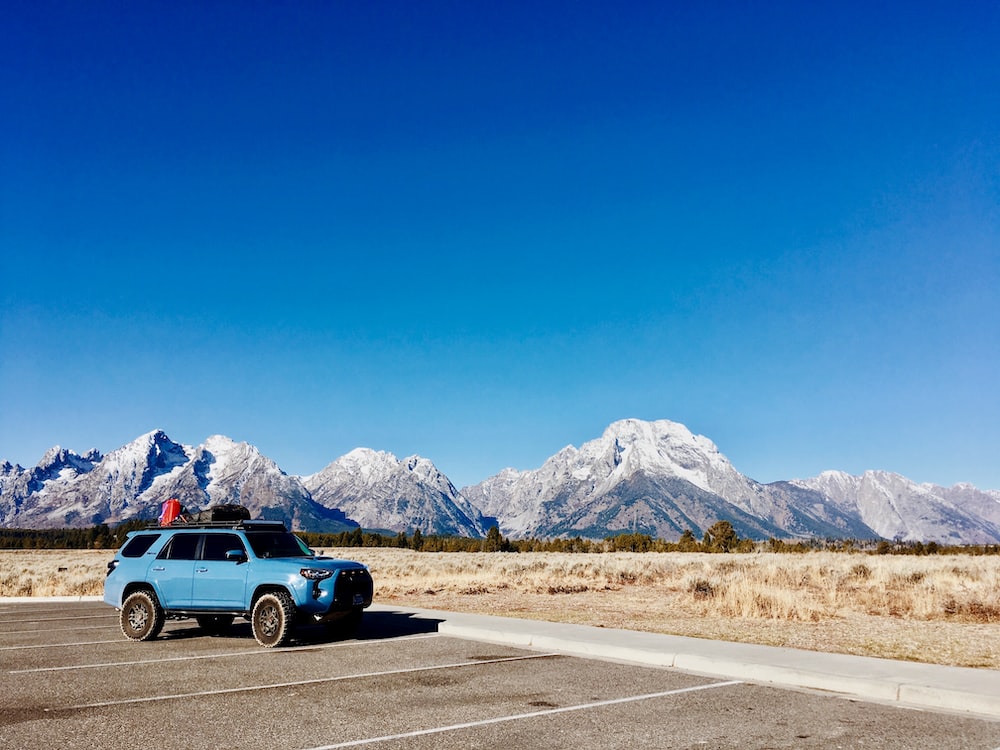 Cycling through Wyoming’s Grand Teton National Park rivals any other park for its towering mountain range rising up over 6,320 ft out of the Jackson Hole valley floor. The highest peak, Grand Teton, stands 13,770 feet tall, dominating the skyline. The contrast of the flat valley floor alongside the range makes for a dramatic experience while riding the Teton Park Road.

From Moose Junction, there is a designated pathway for non-motorized traffic that follows the Teton Park Road to the South Jenny Lake area. This pathway can be used during the season from May 1st to October 31st. The Teton Park Road between Taggart Lake Trailhead and Signal Mountain will be plowed and open on April 1st to bicycle traffic (vehicles permitted from May 1st) giving cyclists a month to enjoy the road without having to share it with vehicles. It should be noted that mountain biking on hiking trails in the park is not permitted, however, there are trails in the Bridger-Teton National Forest which are open for bikes.

Exploring the park is a holistic national park experience, with something for everybody amongst the mountains, rivers, lakes, and forests. Enjoy America’s most beautiful wildlife (from a distance), and soak up the views as you pedal your way through. 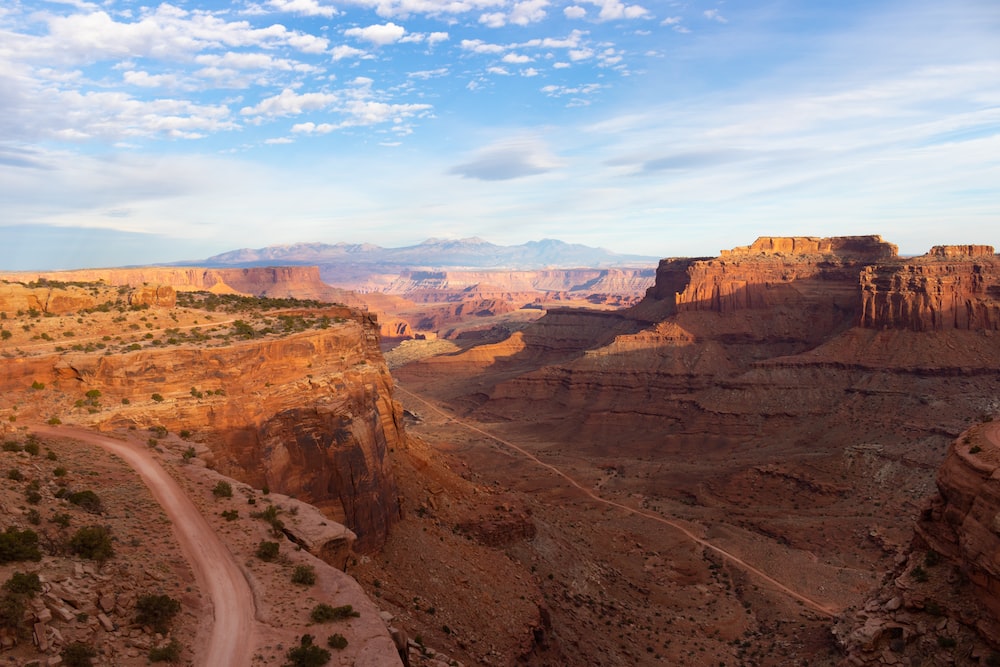 Utah’s Canyonlands National Park lies in the Colorado Plateau carved by the Colorado River. This breathtakingly vast canyon contains numerous impressive rock formations and river corridors, giving it a unique appearance, even when compared to the Grand Canyon.

It is possible to ride regular paved roads in ‘The Needles’ or ‘Island in the Sky’ sections of the park, however, the park is renowned for its seemingly endless mountain bike trails, and the 100 mile White Rim Road, which draws adventurers for single or multi-day rides through the canyon. Overnight or day-use passes are required to use the following roads can be reserved on the park’s website:

The most daring cyclists organize self-guided trips through the park with bikepacking or bike touring equipment for supplies, but there are many options for supported tours, where equipment and supplies are included and a support vehicle follows the group with gear and supplies.

Reservations are recommended well in advance as campsites can be filled up to 4 months in advance. It should also be noted that day-use passes are available for White Rim Road during flood season from early May through to late June. 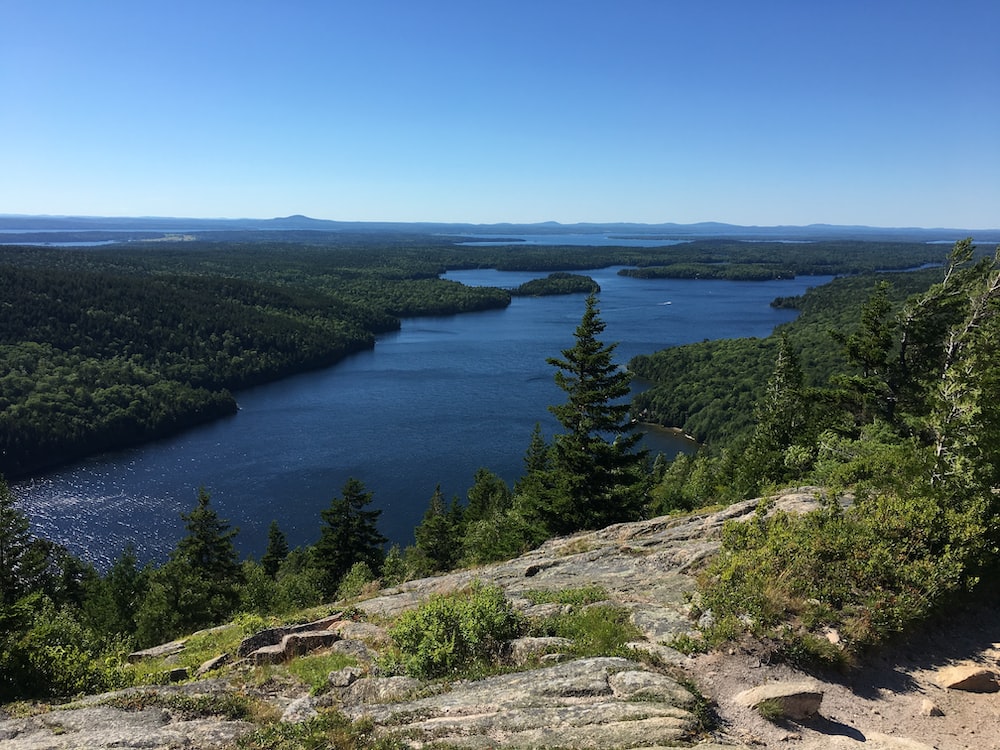 The east coast jewel that is Acadia National Park in Maine is situated along the north Atlantic coast and covers half of Mount Desert Island and other islands, along with the mainland coast. It is important to follow good bicycle safety etiquette while in the park and before planning your trip. Keep an eye on the park’s alerts for any news on road closures, for example, the March/April closures of the carriage roads for mud season.

Cyclists across the country visit Acadia each year to take advantage of its excellent biking infrastructure. Most notably, the 45-mile network of old carriage roads made from crushed rock that snakes around the mountains and valleys of the park, passing stunning viewpoints. This system of roads is closed to vehicles and is serviced by the ‘Island Explorer Bicycle Express’ ferry which takes cyclists across the sound from Bar Harbor Village Green to Eagle Lake.

Another highlight for cyclists is the Park Loop Road on the east side of Mount Desert Island. The road is 27 miles long with beautiful vistas scattered throughout, such as the Egg Island Overlook and the Precipice. It runs one way, for the most part, however, there is a small two-way section beginning at Wildwood Stables.

Also worth mentioning is the short 3.5 mile Cadillac Mountain Summit Road. The mountain stands at 1530 ft. and “is the highest point along the North Atlantic seaboard and the first place to view sunrise in the United States from October 7 through March 6”. Along the road, there are many viewpoints and breathtaking panoramic views when you reach the top.

Experiencing the USA’s National Parks is one of the greatest ways to connect with the vast country. By cycling, exposed to the elements, the sounds, and the slowness of the travel, you allow yourself to gain a deeper perspective of its natural wonders: a can’t-miss adventure of a lifetime.

The Best US National Parks for Cycling: Part 2

The Best Road, Gravel, and Mountain Biking Routes in the USA

Best Touring Bikes in 2023 to Travel the World