Himiway was founded in 2017 by Mike Magaruh in California, United States.

The company has aimed to help popularize e-bikes in the US the way they are used in China and other Asian countries.

In 2017, Mike began building his first prototype bike which is now known as the Himiway Cruiser. It was inspired by Ernest Hemingway and his love for nature and the outdoors while maintaining a rugged image. The Cruiser was built to be a go-anywhere electric bike, and many positive Himiway bike reviews have confirmed this.

Currently, the brand operates on a direct-to-consumer business model, selling the eBikes online, which means they can keep the prices low and remove the middle man. Green travel is the primary aim of this company, and Mike wants to promote cycling as a sustainable alternative to car use, particularly in America. 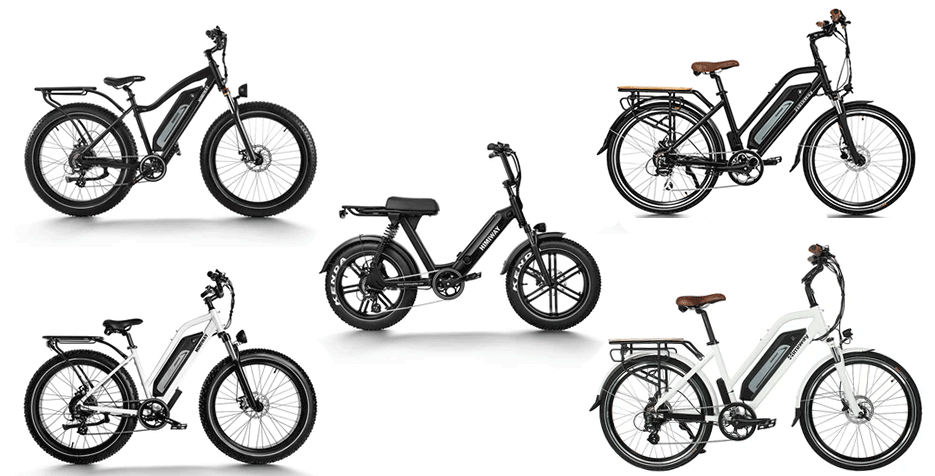 2-Year Warranty & 15-day returns 🏆
Much more generous than the standard 1-year period from other brands, and a 14-day test-try period

Direct-to-Consumer 🏆
Keeping the cost down without the middlemen Mike Magaruh was curious about engineering and mechanics in his childhood, and after studying abroad in China and realizing how much they used e-bikes compared to cars, he decided to try and bring something similar to the US.

Knowing that Americans enjoy riding outdoors and going on adventures he wanted to build an electric bike that was more than capable of riding trails as well as on the road. After humble beginnings in Mike’s garage, the company now has over 100 staff and a big warehouse in Chino.

They sell bikes across the globe to markets including the US, Canada, and the United Kingdom.

Mike Magaruh is passionate about green travel and hopes that Americans will embrace the technology as the Chinese have. By reducing the number of journeys you take in your car, you will help to reduce greenhouse gas emissions that are already causing havoc around the world.

*Himiway is often confused to Hemingway bike in verbal translation. The Escape is Himiway’s moped-style e-bike.

In essence, it is a full-suspension electric fat bike with 4″ wide tires and a 48V Samsung battery. It’s super capable and can be used for anything from riding to work to an outdoor adventure. This fat tire ebike is the ideal bike for the whole family for summer whether you’re running errands or going on holiday.

The dual-suspension provides comfort and smooths out bumps in the road or tracks, while an LCD screen displays all the ride data you need for a safe and enjoyable ride. Himiway suggests you can get 45 miles + on a single charge, which for a bike of this size is quite a decent amount of mileage.

This is an incredibly capable and intelligent bike and at an extremely attractive price of $1,699, you can’t really go wrong! 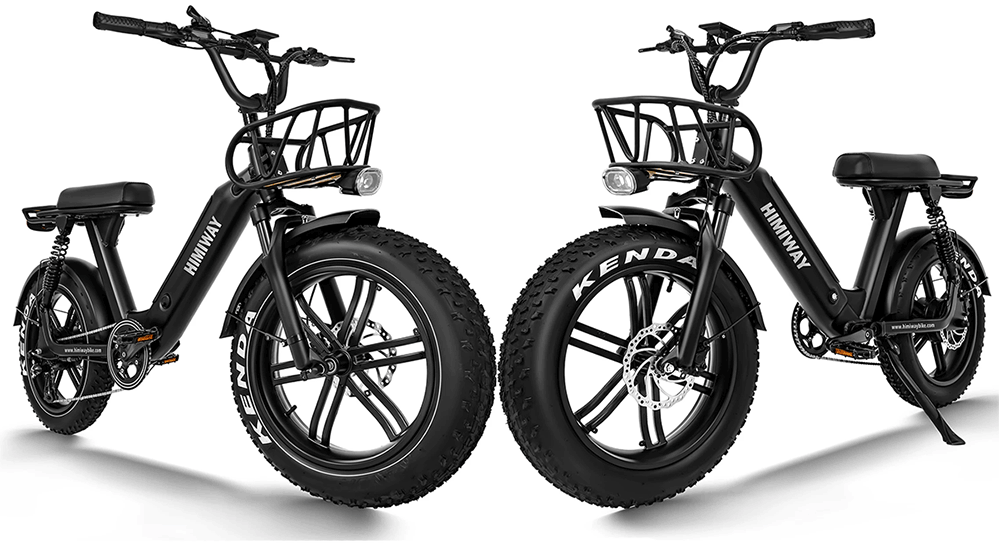 The Himiway Cruiser and Step-Thru bikes are their flagship e-bikes.

They are both incredibly versatile and capable bikes and are jam-packed with features as well as stylish designs. The aluminum frame is durable and helps keep the overall weight down on the bike, but it can accept up to 350lbs of payload capacity. A 48V Samsung battery powers the bike well, and from each charge, you can expect to get between 35-60 miles of range depending on the modes used.

The Cruiser and Step-Thru’s are not only ideal commuter bikes but electric fat tire mountain bikes as well. With 80mm of front suspension and 180mm mechanical disc brakes, this bike can be taken on almost any terrain, making it one of the best fat tire electric bikes available today.

The Step-Thru has a slightly different frame design to the Cruiser, where the top tube is lower making it easier to swing your leg over. This style of frame is typically seen on town or city bikes. Himiway stayed true to the brand’s word and have kept this bike at a low price of $1,599, making it accessible for more people. 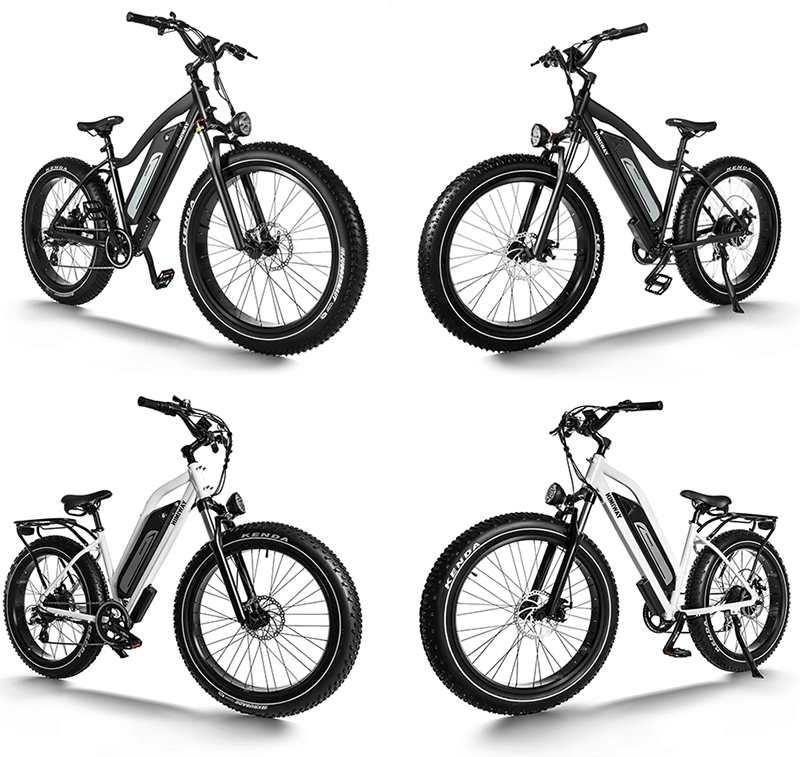 The brand also produces and sell a wide range of accessories for your e-bike.

This ranges from child seats and baskets to extra batteries and tools and clothing to keep you going on your bike.

You can find these accessories on their website and they allow you to build your bike to your own needs and specifications.

So how does the flagship Himiway Cruiser stack up against some of the other best fat tire eBikes on the market?

We’ve put together a comparison so you can see for yourself just how it measures up against the ever-popular Rad Power Bikes – RadRover 6 Plus. A couple of key things to point out are the increase in range and improved suspension compared to the Rad Power. Additionally, Himiway has managed to keep the price lower.

For this comparison, we’ve pitted the Escape, Himiway’s electric scooter style bike against the Engwe Engine Pro 2 – a folding e-bike that packs a punch.

The Himiway Escape is cheaper and can offer more range, but the Engwe can assist up to speeds of 28mph rather than 20mph. It’s also slightly lighter, but has smaller wheels and is slightly less capable off-road than the Escape.

Himiway has come a long way since its inception only a few years ago.

The brand has a range of fat eBikes to its name and they are each capable in their own ways. Often included in some of the best electric fat bike lists, the Himiway bikes are affordable, good quality bikes that are helping open up the idea of active travel to those who perhaps previously couldn’t afford it.

With this in mind, the brand is successfully acting out its mission of getting more people on bikes and making the idea of e-bikes versus using your car for every trip more accessible.