With a GPS Bicycle Tracker, cyclists can now find and follow a stolen bike with this extra layer of security for their most valued possession.

There are an estimated 2 million bikes stolen each year in the USA. Because of modern lock breaking techniques, using a high-quality lock and good locking technique is not enough to guarantee your bike is safe. GPS trackers paired with their companion apps both prevent theft and help with the recovery of stolen bicycles.

Using a GPS tracker for bikes, you can remotely monitor the location of your bicycle at all times.

In the event of a robbery, owners can call their local authorities to assist with recovering the stolen bike using the pinpointed GPS location through the bike tracker app. Some bicycle trackers even notify users if their bike is being tampered with before it moves location.

Why Get a GPS Bike Tracker?

Anti-theft GPS trackers are the perfect security tool for any cyclist who wants peace of mind when they lock up their bike anywhere.

These GPS trackers can also be used to help recover stolen bicycles in the event of a home break-in. They are especially useful for any cyclists living in urban areas where bike theft and general crime rates are higher.

The prices of bike trackers vary roughly between $25-$150.

How Do Bike Trackers Work?

In general, bike tracking devices work by sending out a GPS signal that can be followed through an application or website. They are usually hidden discretely on your bike, so thieves cannot identify the device. This allows you to track and find where the thief has taken it so that it is not lost forever.

Premium trackers also warn owners via mobile push notifications if any tampering has occurred, so you can prevent the theft in the first place. Some models also require a sim card or subscription to allow tracking.

How to Find a Stolen Bike?

It can be difficult to locate a bike once it has been stolen. Using a discreet GPS bike tracker can help with this problem. You will be able to find your bicycle wherever it is, so long as the thief hasn’t identified the tracker.

Another important way of helping find your stolen bicycle is to register the unique serial code with an online registry system in your country. Police and those shopping for used bikes (on Craigslist for example) can use this code to identify if the bike is stolen.

Bicycle security is a fast-growing industry. Advancements in technology lead to the frequent creation of new and innovative devices which are available even to the average bike owner.

Along with GPS tracking systems for bikes, smart bike locks and bike sensor locks (used among bike deliveries) are now widely available. The main features of these technologies include sensors, GPS transmitters, alarm systems, and Bluetooth bike lock and unlock.

Below we have put together a list of the best bike trackers available on the market by researching the best-rated and most searched bike security devices and GPSs for theft. These devices vary in functionality and style, but they each offer a way to track your bike location by transmitting GPS signals.

An invisible bike tracker with the most precise tracking

The Sherlock bike tracker device and application is one of, if not the most recognized GPS tracking devices available on the market.

The Sherlock’s GPS location is highly accurate to just 10 feet. The device also features a motion sensor that alerts the owner immediately through the device’s companion application, giving you the opportunity to stop damage or theft before it happens.

This small Italian startup has engineered a device that is virtually undetectable. Although not universally compatible, the unit fits neatly into any 19-23mm handlebars and weighs less than 2oz. This means that both owners and thieves will not be able to notice its presence on the bicycle.

This durable device is resistant to water and dust, with a battery that lasts up to 7 days that can be conveniently charged with a micro-USB cable.

The Sherlock arrives with 2 years free internet connection included with its embedded SIM card. From the third year, users need to pay a monthly fee of approx $3.5 to continue using the GPS function. 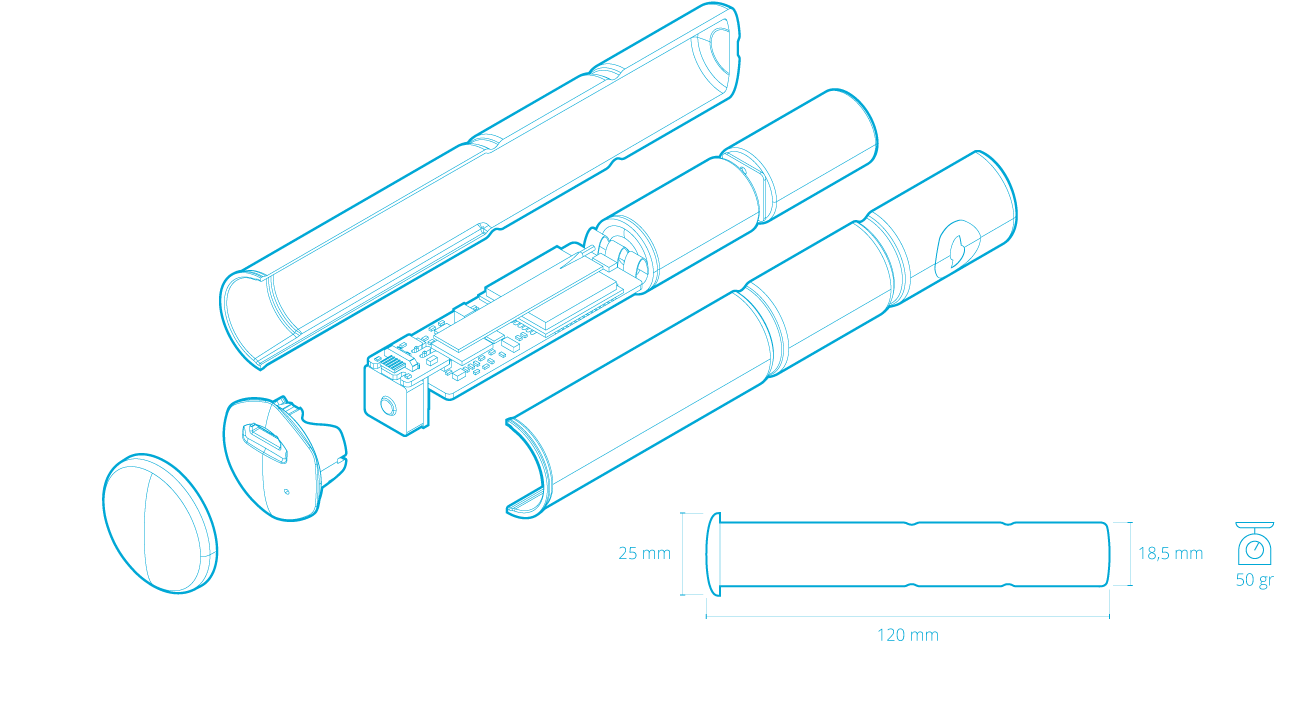 The Boomerang Cyclotrac V2 is a premium GPS bicycle tracking device that is compatible with every bike, featuring tamper-proof mounting.

The Boomerang bike tracker can be mounted to your bike in seconds with the help of their special tool. It uses a built-in motion sensor alarm with state-of-the-art GPS technology with the ability to track your bike in real-time anywhere there is a cellphone signal.

If your bike is disturbed, the device’s anti-theft motion sensor alarm will alert you immediately with a message sent to your cellphone and email address. Meanwhile, an audible deterrent alarm will ring on the device to help stop the robbery and the GPS tracker activates to record its position.

The Cyclotrac is not only a security device, it also tracks some of your ride metrics including distance, elevation, calories burned, and more. All of these metrics are readily accessible on the Boomerang app and website. While in full tracking mode, the device lasts 10 hours. In sleep mode, it may last 3-4 months. Charging is also simple and quick, fully charge takes 4-6 hours with a standard USB cable.

The Boomerang CycloTrac is built for durability. It’s completely waterproof and stays firmly in place with its special mounting hardware. Another notable feature is its crash detection capability.

A totally new way to protect and locate your bike

The AIR by See.Sense is a sleek new anti-theft GPS bike tracker by cycling tech startup See.Sense. With its release set for summer 2021, it will have the most up-to-date technology available.

To keep your bike safe, the AIR comes with highly-accurate GPS, locating the device within just a few feet. If somebody tries to steal or move your bike, the device immediately alerts your phone so you can follow its movement. You can rely on the durability of the device as it features full waterproofing and damage-resistance casing.

Despite its small and discreet design (weighing less than 3oz), the AIR’s battery is still one of the best in the market, lasting up to three months. You can fix it to your bike quickly and easily with the special security tools, and the device is fully tamper-resistant due to the security bolt. Users can fix the device to multiple places on their bicycle such as neatly under the saddle or below your bottle cage.

See.Sense has developed an easy-to-use application available on iOS and Android. While riding, the device monitors your surroundings, updating you on poor road surfaces or route conditions through the app.

Pre-order customers will get one year’s free network connection on purchase. After 1 year, it will cost only around $0.04 per day.

Swisstrack boasts that their device is the only GPS bicycle tracker in the world not visible from the outside of the bike. The device also comes with the most extensive feature list of any bicycle security tracker.

This hidden mini GPS bike tracker is stowed in your bicycle frame. It comes with the biggest battery capacity on the market, lasting over 6 months on one charge, so you don’t have to access the inside of your frame regularly. When the battery is low, you will receive an SMS message to alert you so you have time to charge it before you need it again.

The device’s GPS location is accurate up to 15-45 feet. To track and locate a stolen bike, all you need to do is access the position from the tracking app on your smartphone or tablet. The app will feature a logbook of all the routes covered, an alarms function, and much more.

The alarm feature can be set to sound when your bike leaves a specified area on the map, as well as alerting owners if the bike moves through motion sensors with 4 levels of sensitivity.

There are two unique features of the Swisstrack bicycle GPS tracker. The first is that it uses GPS and GSM (cellular), and the second is its ability to listen to any noises in its surroundings (baby phone function). The Swisstrack GPS tracker is truly one of the best available. 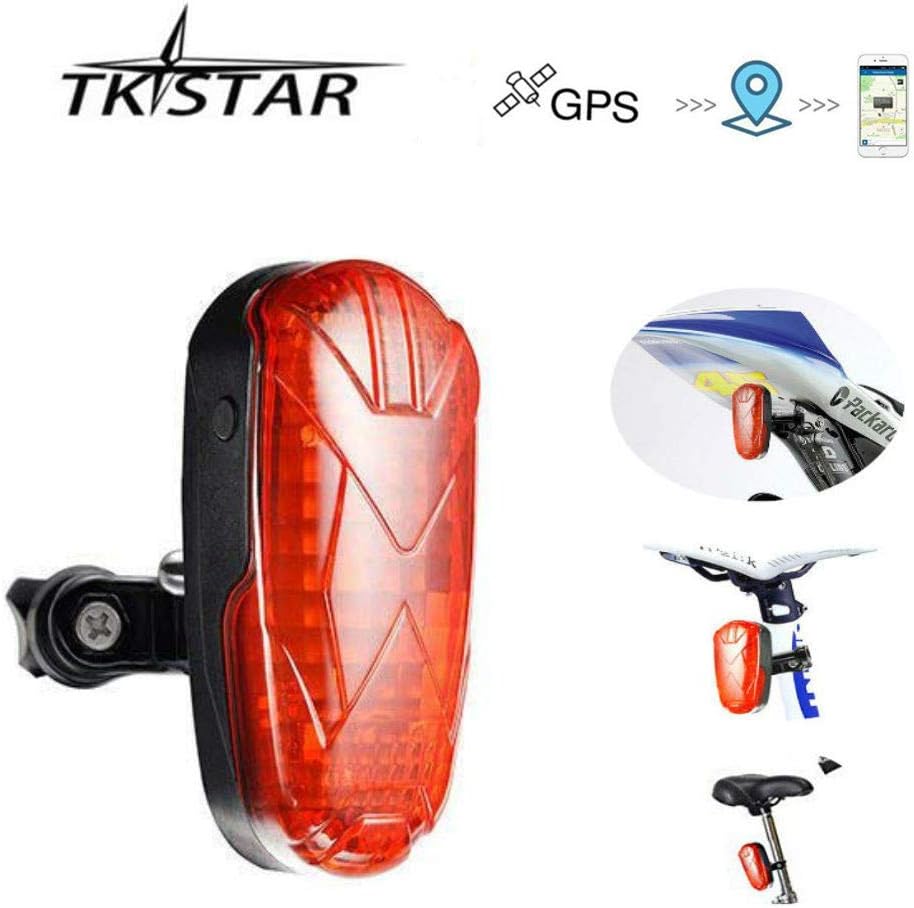 The TKSTAR GPS bike tracker is a budget bicycle tracker that disguises itself conveniently as a functioning backlight.

The tracker works using a GSM network and GPS satellites so you can locate and monitor your bike by SMS, APP, and internet website. The tracker requires a 2G/GSM SIM card which has a monthly subscription plan for data of at least 30MB.

To locate the device, you must call the SIM card’s cell number in the tracker or send a message “G123456#” and you will receive a Google Maps link to its current position.

The device also has an over-speed alarm, shake sensor alarm, and low battery alarm. When any of these alarms is activated it will send an alert to the owner’s cell number.

You can also set the tracker to alert you via text or email when leaves a specified area, geofencing. To set up the device, you must add an admin and an SOS number for emergencies, which can be activated by holding the SOS button for 3 seconds.

Although the device has good functionality, users note issues with the application used for real-time tracking. That being said, this device definitely offers good value for money when compared to its pricey competitors.

Bicycle theft is largely preventable if you take the right precautions. Bike anti-theft GPS devices are an extremely effective method of keeping your bike safe. Using one of these devices does not replace the need to have good bicycle security habits, a high-quality lock, and common sense when keeping your bike safe.

If you considering a GPS transmitter for bikes, the ones we discuss in this article include all of the features needed plus many more. Before you make your purchase, identify the features that you personally want, paying attention to recurring costs, and battery so that your device is keeping your bike as safe as possible at all times.

The 16 Different Types of Bikes