Belt-drive bicycles have passed the initial ‘break-in’ period and have proved to offer a great alternative to classical chain & derailleur systems. We wouldn’t go as far and say that belt-drive bikes are better than the traditional drivetrain system, but surely – bikes with a belt-drive system have a solid place to stay in the ever-changing bicycle industry. 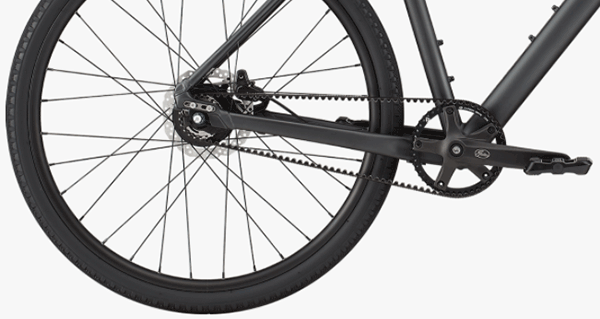 In this article, we’ll show you a quick guide to belt-drive bikes that will answer any questions you might have about this innovative technology. After that, you can check out our selection of the best belt-drive bikes you can get in 2022 that offer the most value for the money.

What is the belt-drive system on a bicycle?

Belt-drive bicycles use a polyurethane or carbon fiber belt on the drivetrain instead of the traditional steel chain. This provides several advantages, most notably a cleaner, a quieter bike that requires less maintenance. Belt drive bikes gained popularity in Japan when Bridgestone released the Picnica folding belt drive bike in 1980. In 1984, Gate Corporation took the belt drive design to the US, although it only really caught on in 2007 with the modern Carbon Drive system.

One of the most iconic belt-drive bicycles of all time

With the Lefty fork

The Cannondale Bad Boy 1 is a unique hybrid bike in many ways, not least due to the Gates Carbon Drive CDX belt driving a Shimano Alfine 8-speed internal hub. The Bad Boy 1 also features Cannondale’s proprietary Lefty Lightpipe, a rigid fork with only one tube on the left side.

This striking feature not only gives the bike an interesting look but provides improved strength and agility – not to mention integrated LED lighting. The Bad Boy 1 is a very cool hybrid commuter bike that looks tough and means business. It has 650b wheels with thick 40mm WTB tires, hydro disc brakes, and high-quality FSA components.

You are looking at the best combination of elements a proper bike should be at under the $1,000 mark.

The Ride1Up V2 is an electric, belt-drive, single-speed bicycle with road bike wheels! Many people have been looking for an e-bike that doesn’t resemble one, and here is what to expect in 2021. The bikes do look very good, minimalistic fixie-style and on top of that, the ride itself must be rather good, too due. Due to 700c wheels and light weight of 33lbs make the 350W motor effortlessly! The bike also has a maximum pedal-assisted speed of 24mp/h which is 4mp/h faster than on most ebikes even today.

Although the bike has one of the best prices we’ve seen in ages, the downsides such as the V-brakes and single-speed drivetrain won’t hesitate to still show both thumbs for this bike. It is a simple bike for a simple person who wants a cheap and hustle free bike for 10+ years. If you’d like to read more about the Ride1UP, take your time and see what they have to offer!

The CTY 3.1 from Co-op Cycles is a sporty belt-drive hybrid bike. It uses a Gates Carbon Drive belt with an 8-speed Shimano Alfine internal hub groupset and hydraulic disc brakes. It makes an excellent commuter bike that’s also versatile enough for longer weekend rides through the city or countryside.

The frame is made from lightweight 6061 aluminum, with 700c wheels and 35mm Kenda Kwik Trax puncture-resistant tires. With additional mounts to add a rear rack and fenders, this is the ideal bike for shopping or delivering goods, and could even be used for short weekend camping trips.

The Classic Plus Gotham Edition from Priority Bicycles features an all-black commuter bike inspired by the streets of New York City. It has a comfortable upright seating position and comes equipped with all the necessary city-cycling add-ons like a kickstand, bottle cage, and puncture-resistant tires.

Priority Bicycles 600X is the brand’s only belt-drive mountain bike.

It uses a Gates Carbon Drive belt with a 3-speed Shimano Nexus internal hub, which is perfect for city commuting but could be a bit difficult on hills or over a long distance. Its lightweight aluminum frame comes in three sizes with both a standard ‘Diamond’ or ‘Step-through’ style for easy mounting.

Get from Priority Bicycles

Where else to look for the latest trends of cycling than the Netherlands – the world’s most successful Cycling Nation. The number of bicycles exceeds their own population, therefore the Dutch must be mastered the art of bicycle manufacturing. The M2 NuVinci is built for fast and hustle-free commuting, equipped with essential components for $1,000 bike – there isn’t much to add or remove from the bike. The geometry and the tires make it a good all-rounder bike from paved roads to cobblestone streets, and why not tackle some light trails – the 650b wheels are among the most versatile out there!

The newest, if not the first gravel belt-drive bicycle on the market.

The Apollo by Priority Bicycles is inspired by many touring bikes that have used carbon belt-drives in the past and have proved to be successful in their range. I mean, people have crossed continents and traveled around the world with a belt-drive bike which requires maintenance after every 19,000miles. The bike is well equipped for both a beginner and a seasoned cyclist due to its ease of use and durability.

Get it from Priority Bicycles 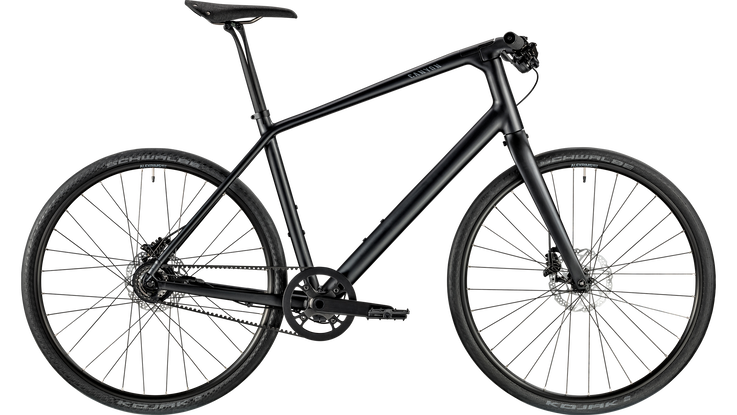 This rather extraordinary looking belt drive bike from Canyon has straight handlebars connected directly to the steering column with almost no stem at all.

The result gives it a strikingly minimalist look that was quoted as being “like no other bike” by the Design and Innovation Award judges. In addition, it sports an impressive 11-speed Shimano Alfine internal hub driven by a Gates Carbon Drive belt and finished off with Deore hydraulic disc brakes.

The 29” Alexrims wheels are wrapped in fast-rolling, puncture-resistant Schwalbe Kojak tires for a safe and smooth ride. This attractive looking bike from Priority Bicycles is a lovely old-style cruiser with a modern twist. The 3-speed sealed Shimano internal hub is driven by a Gates Carbon Drive belt, making the entire drivetrain impervious to the damages of salty and humid air. This is where the Priority Bicycles Coast gets its name – as the perfect bicycle for coastal living by the sea.

It also features 26” rustproof alloy wheels, stainless steel fenders, and an ultralight rustproof aluminum frame. The Priority Bicycles Coast comes in both traditional and step-through models, with a one-size-fits-all build and a choice of single or three-speeds. 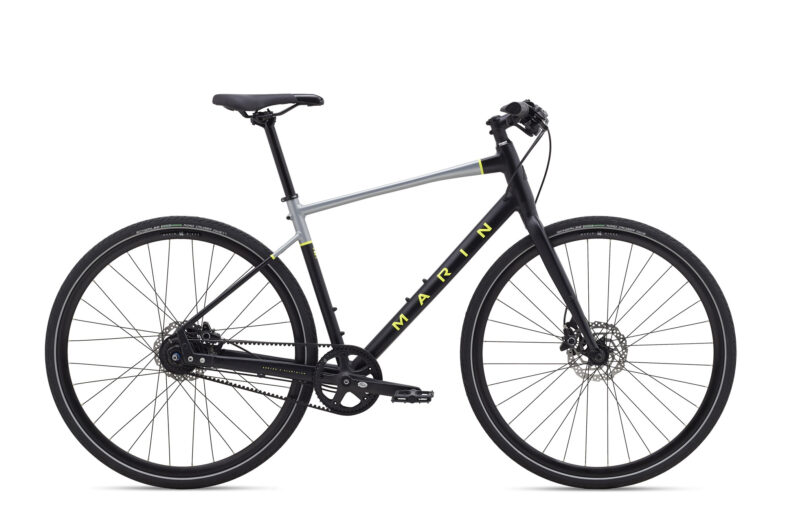 The Marin Presidio 3 is a high-quality hybrid commuter aimed at cyclists who want to keep maintenance to a minimum. The corrosion and dirt-free belt drive combined with internal cable routing and puncture-resistant tires mean you’ll barely have to do any upkeep on this machine. It comes with an 8-speed Shimano internal hub and Gates Carbon Drive belt and crankset, all mounted on a 6061 aluminum frame with flat-mount hydraulic disc brakes. The Presidio 3 is a high-quality, hassle-free commuter bike that is ideal for getting around town in the easiest way possible.

Frame sizes from XS to XL

Get from Marin Bikes

The Viral Skeptic is a belt-driven mountain play bike, with knobbly 3” tires, a titanium frame, and front suspension. It’s one of very few belt-drive MTBs on the market, incorporating several new technologies to make it an impressive piece of kit. The Gates belt runs off a 12-speed Pinion gearbox installed on the crank rather than the rear hub, providing an incredible 6 times more range than a standard 1×12 groupset. The Viral Skeptic has a 148mm Boost rear hub spacing triangle with 148/12 thru-axles for varied wheel compatibility, fitting both 27.5” and 29” rims. It’s also dropper-post compatible with internal cable routing and an integrated tapered headtube. The innovative aluminum frame is designed for comfort and durability and is supported by Rodi Excalibur wheels with Shimano hydro disc brakes and Continental puncture-resistant tires. Altogether, the Ghost Square Urban is a very impressive, high-quality city commuter bike that comes in at an affordable price.

Get it from Ghost Bikes

Belt-drive bicycles are not new, but a lot of people are still not closely familiar with this remarkable technology. Here are some of the main questions and considerations that might come to your mind when shopping for a belt-drive bike.

‘Open’ belt-drive systems have been used in the automotive and industrial fields for ages. More often, you’ll see belts being used as power transmission elements between two pulleys that convert heavy power. Therefore, there’s no need to doubt the durability of belt-drive systems on bicycles.

Is the belt-drive drivetrain going to be the next big thing?

Probably not, but it sure has a special purpose in a tight niche – especially in the touring communities. Due to their incompatibility with traditional gearing systems and the need to split the frame to install, belt drives remain a niche product used mainly by dedicated fans of the system. 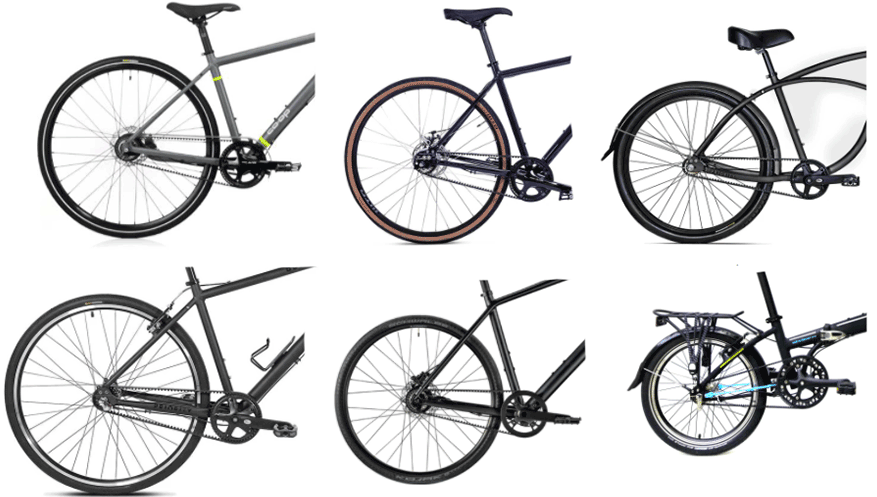 Are belt-drive bikes any good?

Belt drive bikes require less maintenance than traditional chain-drive bicycles because they don’t use oil. Therefore, belt-driven bikes don’t attract as much dirt and are less prone to wear. However, on a rare occasion when the belt does break it can be difficult to replace.

Bicycle belts don’t extend over time, the replacement is needed due to worn cogs!

How do belt-drive bikes work?

Belt-drive works in the same way as a chain, the belt is driven by the crank and turns the rear wheel. However, belts can’t be shifted between cogs like a chain so they require an internal hub gearing system to change gears.

How do you turn a bike into a belt drive?

It’s possible to install a belt drive on a normal bike but you would need to replace the crank and install a single speed or geared hub on the rear wheel. You would also need to splice open your frame on the rear triangle to install the belt as they can’t be split apart like a chain. While the splice can be re-welded together, it would likely cause a weakness in the frame.

Also, bear in mind that ‘regular’ bicycle frames tend to flex more than belt-driven bike frames which could lead to premature belt and cog wear.

How long does the belt drive last on a bicycle?

Gates Carbon Belts’ maintenance schedule is after every 19,000mi / 30.000km. Therefore, that is much longer than a standard chain that usually needs to be replaced after around 3,000km due to stretching. For the majority of average riders, a Gates Carbon Belt will last for at least 10 years.

What are the alternatives to Gates Carbon Belt Drive?

Some alternatives to Gates Carbon Belt Drive systems include:

How to adjust a belt drive?

In order to know if your bicycle’s belt has the correct tension, there’s a Carbon Drive Application that allows you to set the recommended tension with your smartphone. Basically, the app uses your phone’s microphone to listen to the sound frequency the belt makes when strummed, assessing the amount of tension.

Should you question the durability of belt drive systems?

No, as belt-drive bikes have been proved to last a long time in treacherous climates and conditions. As regular maintenance, cleaning the belt and cogs with a brush is pretty much all you have to do in between the 19,000mile range.

Riding in fine dust, the belt-drive might start to squeal, which can be removed by cleaning the belt with fresh water. (Same goes for your cars engine belt noise – where a drop of water removes the squeal most of the time)

Where to shop for the best belt-drive bicycles?