Marin’s Rift Zone series bikes are 100% meant for the most mountainous of trails. Featuring full front & rear suspension, these bikes are perfectly built for dirt racing. With their low & aggressive geometries, Marin has crafted a line of cycles that withstand the pressures of a personal endurance ride, while also being comfortable enough to bounce around the woods with your friends on the weekends. 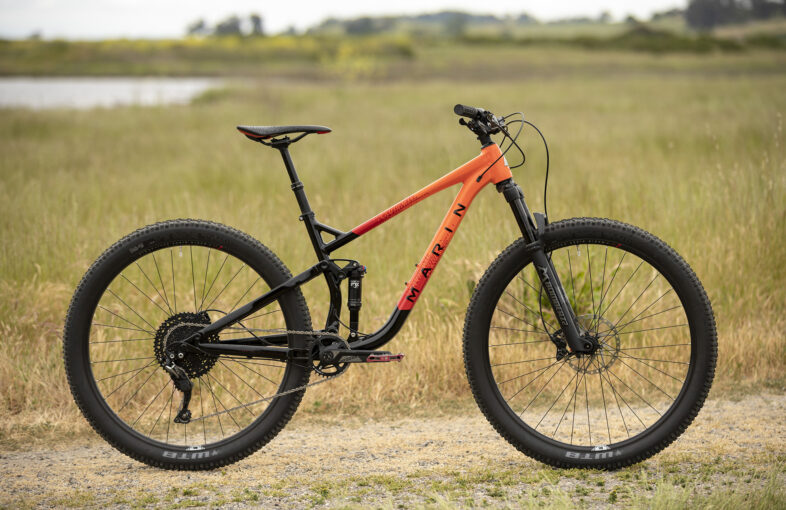 All three aluminum models feature a Series 3, 6061 aluminum frame which helps in making the bicycle stiff, responsive, and tough as nails when tackling rough terrain.

Marin also included their proprietary MultiTrac Suspension Platform, which they first included back in 2017 on their Hawk Hill models. While not as sensitive as some of the company’s other designs, the single-pivot MultiTrac is a lot easier on the wallet, along with being quite a bit easier to maintain.

On the front end, the aluminum Rift Zone 1 & 2 both come equipped with RockShox Recon RL 29″ forks, featuring 130mm of compression and a wide amount of rebound adjustment. These forks also come with a RockShox Maxile front thru-axles, to compensate for wider, more rugged wheelsets. The Rift Zone 3, on the other hand, comes with a high-end Marzocchi Bomber Z2 29″ fork paired to a Kabolt axle, a high-end option that weighs a bit less than the RockShox options.

All three of these trail monsters come standard with 29″ Marin-built wheels. They’re double-walled, and all come ready to be run tubeless. These forged alloy wheels run on sealed-bearing, 32H hubs and are built specifically for center lock disc brakes.

Looking at tires, all three models use Vee Tire Co. tires, which are known for proprietary compounds, customized tire segments, and unique tread patterns. The Rift Zone 1 & 2 come with Vee’s Crown Gem 29×2.3 tire, with grooved tread blocks which make them perfect for keeping your steering nice & stable on the dirt.

Both have the same Unidirectional Carbon Fiber Front Triangle and Series 4 Alloy Rear End. The combination of carbon and aluminum makes the bike sufficiently stiff but also pliant when the trail requires it the most.

These models use Maxxis Minion tires, 2.5 (F) and 2.4 (R) inches wide, Shimano MT401 (Carbon 1) and SLX (Carbon 2) hydraulic brakes, and front suspension with 130 mm of travel. The front suspension differs, whereas the rear is the same.

There’s also a difference in shifting, since Carbon 1 uses a 12-spd SLX derailleur, whereas Carbon 2 relies on a 12-spd XT mech.

Next, we’ll get into the specifics of the different Rift Zone models.

The Zone 1 comes packed with 11-speed MicroShift shifters cabled to a Shimano Deore Shadow Plus SGS derailleur in the back. These Shimano derailleurs are direct-mount, meaning that there’s no use for an added hanger, keeping weight down while adding stability.

Looking at its drivetrain, the 1 features Marin’s proprietary forged alloy 1×10 steel 32T chainring running over a Sun Race 11-speed, 11-46T cassette. The idea here was a simple one: to keep things easy to maintain while providing as much riding stability as they could squeeze out of the components.

For stopping, Zone 1 is running a set of Shimano BR-MT201 hydraulic disk brakes with a pair of 160/180mm rotors. These brakes are a bit more of an old school build, but the MT-201s are a tried & true design that is super easy to install & setup. While not the absolute top of the heap, they’re incredibly dependable. 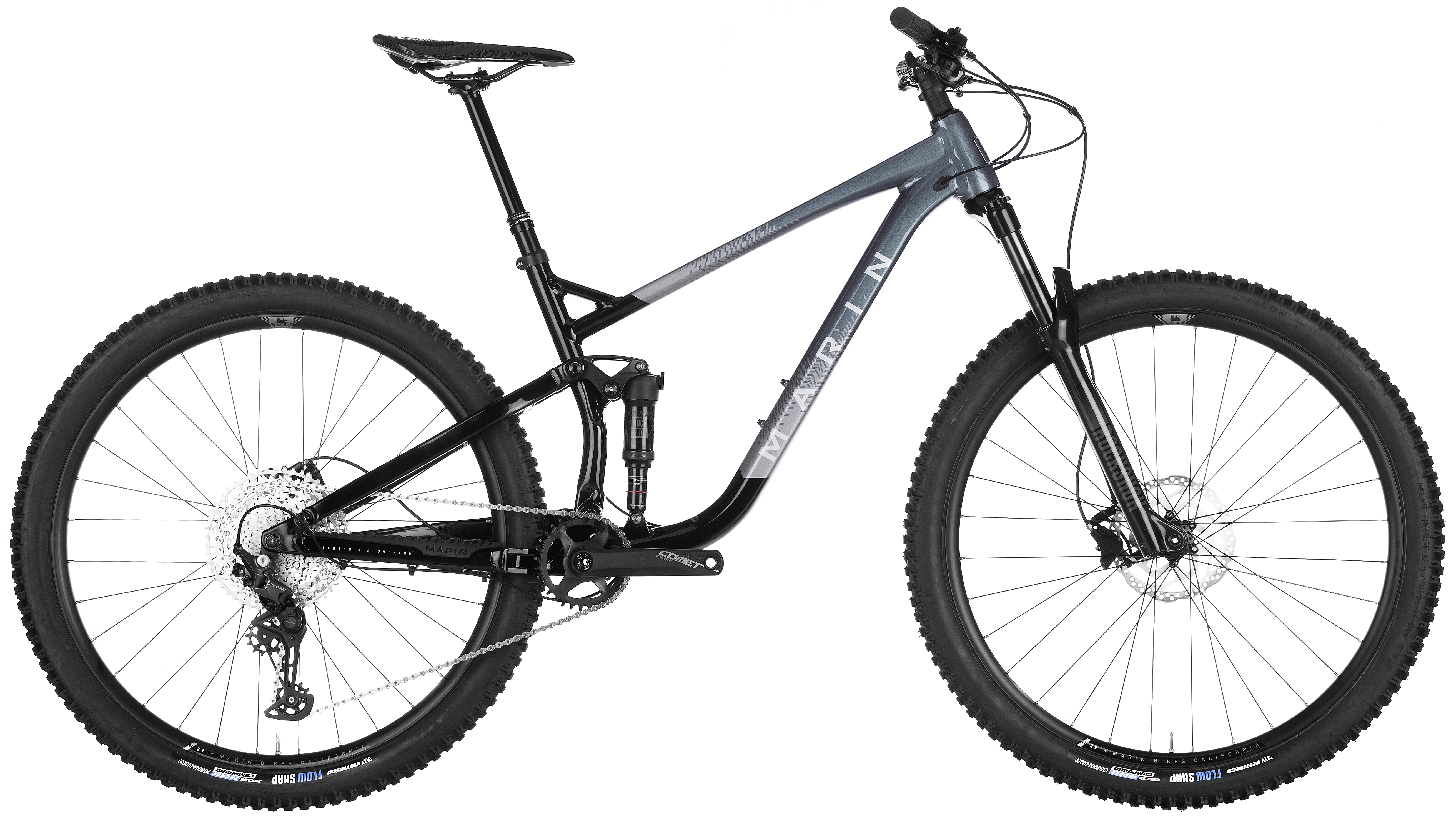 The Zone 2 is a bit of an upgrade, coming with all SRAM SX components. The Eagle series is known for its smoothness & dependability, with its 1×12 shifters being built with SRAM’s “X-ACTUATION”, which keeps your shifts sharp & steady regardless of the situation. On the back, there’s an SRAM SX 12-speed Long Cage derailleur keeping the whole thing running smoothly on even the widest of shifts.

For the Zone 2, Marin opted to include SRAM’s SX Eagle, 32T chainring that runs over an SRAM PG-1210 Eagle 11-50T cassette. As mentioned above, the Eagle series drivetrains are smooth as silk, while being built dependably. With the widened cassette, you’ll have no problem hitting the sharpest of hills.

Looking at the stoppage, the 2 has the same sturdy set of Shimano BR-MT201 hydraulic disc brakes as the Zone 1, but this time they’re running a set of dual 180mm center lock rotors. These are easier to install than standard 6-bolt rotors, while also saving you a bit of weight. 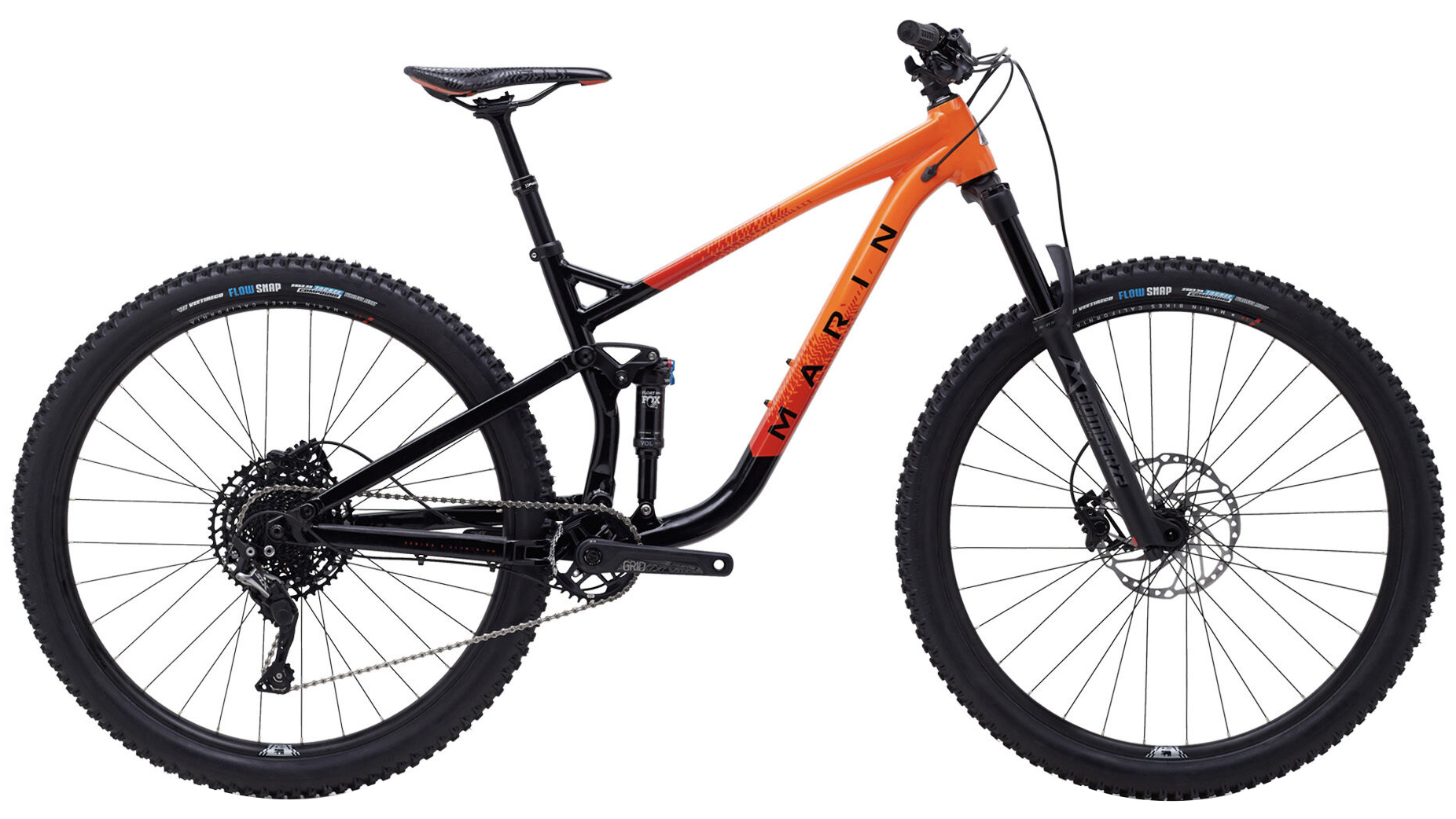 On the flagship Zone 3, Marin decided to install Shimano SLX 12-speed shifters tied to Shimano SLX 12-speed SL-7100R derailleurs. This groupset has only been out for around 6 months but has seen extremely positive reviews across the board, thanks to its stellar build quality.

If the quality wasn’t enough, Shimano made these components cross-compatible with their XTR & XT 12-speed series hardware, meaning that finding replacement parts is incredibly easy.

Regarding drivetrains, Zone 3 went for broke, deciding to include an FSA GRID, Modular 1x, 32T chainring, which features MegaTooth Technology, perfect for added chain security on tough trails. This runs over a SunRace 12-speed, 11-50T cassette, which means that steep climbs are yours for the taking.

The Zone 3 opted for an even more rugged option, choosing to pair these with Shimano’s MT420, 4-piston brakes running dual 180mm rotors. The added pistons make these last quite a bit longer than their 2-piston counterparts while adding a fair amount of braking power in the process.

One notable difference is that Zone 3’s wheelset comes with a sleeve joint, while the 1 & 2 come with a pinned joint. Sleeve joints tend to be a bit more cost-effective and fit precisely into a rim’s cavity, which increases brake smoothness & overall durability.

The Zone 3 also gets a bit of an upgrade with it’s Flow Snap 29×2.35 tires. These are built to handle all types of terrain & all types of weather on the race track. Whether you’re looking for speed, braking, or corner traction, these tires do it all. 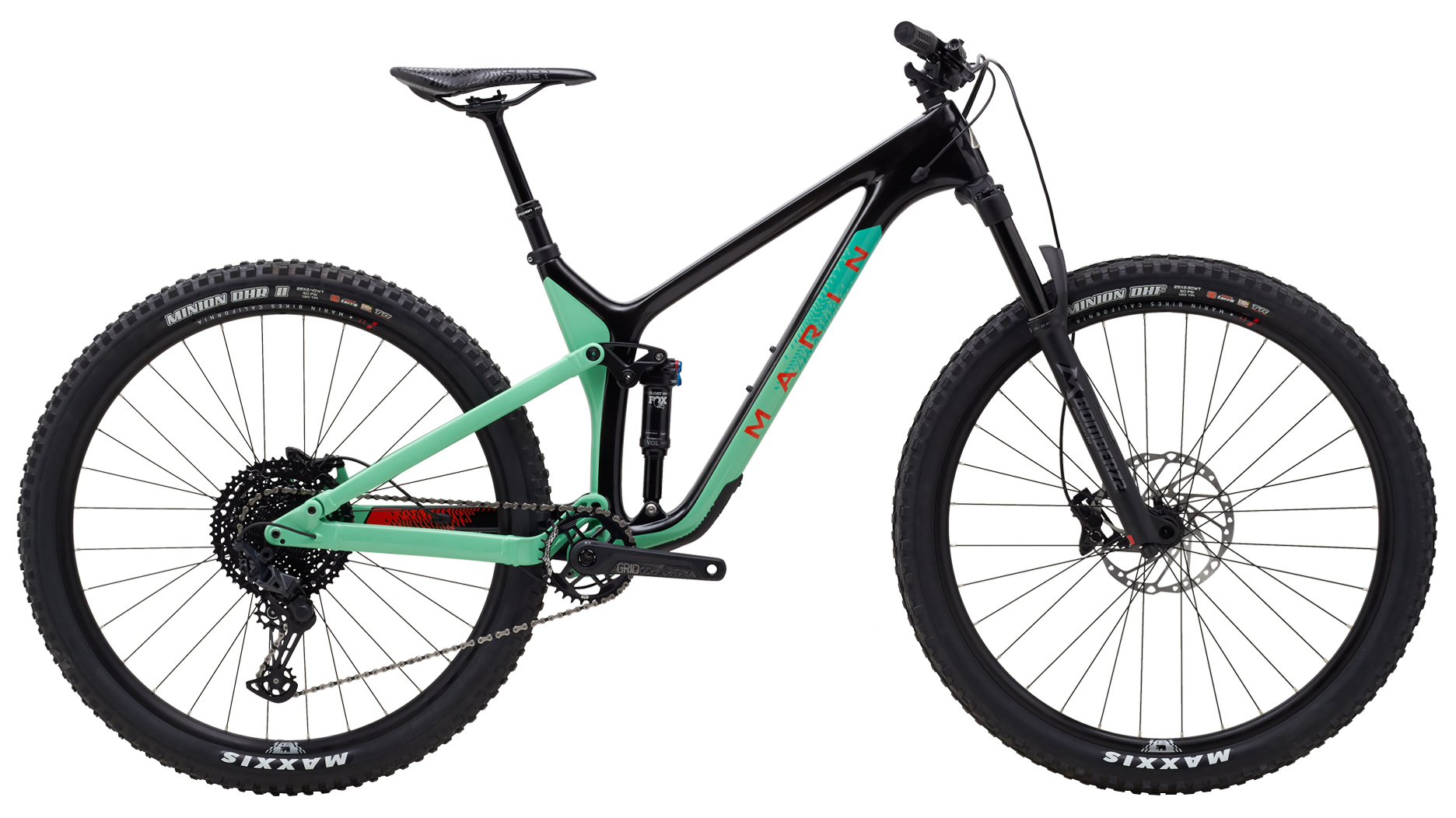 It has a 1×12 drivetrain and shifts gears using the reliable and bulletproof Shimano SLX SGS rear derailleur. This is not a top-of-the-line rear mech, but it’s as close to the top as you can get with this amount of money.

It’s paired up with Shimano SLX SL-7100R levers which are precise and easy to use even with winter gloves on. The main difference between Shimano SLX and higher-end groupsets such as XT is mainly in the overall weight. In terms of performance and shifting, you will not see that much of a big difference.

The drivetrain on the Rift Zone Carbon 1 is carefully put together to allow you to tackle steep hills and walk as little as possible. The Crankset is an FSA GRID, featuring a 32T Direct Mount Chainring with Boost Spacing that will improve the efficiency of your pedaling and prevent the chain from skipping.

On the other end, there’s a 12-spd SunRace cassette with an 11-50T range, which is massive enough to keep the cadence high at all times.

Marin did not want to take any chances when it comes to the wheelset and tires on their Rift Zone Carbon models. Both models roll on Maxxis Minion DHF front and Maxxis Minion DHR II rear tires. The front tire is 2.5″ wide, whereas the rear is 2.4″ wide. This way, you will get a maximum grip when cornering and maximum speed when hitting flat straights.

The rims are made in-house by Marin. They are built from aluminum and have a double wall structure which makes them strong enough to survive jumps, drops, and bunny hops. Most importantly, they’re tubeless compatible. 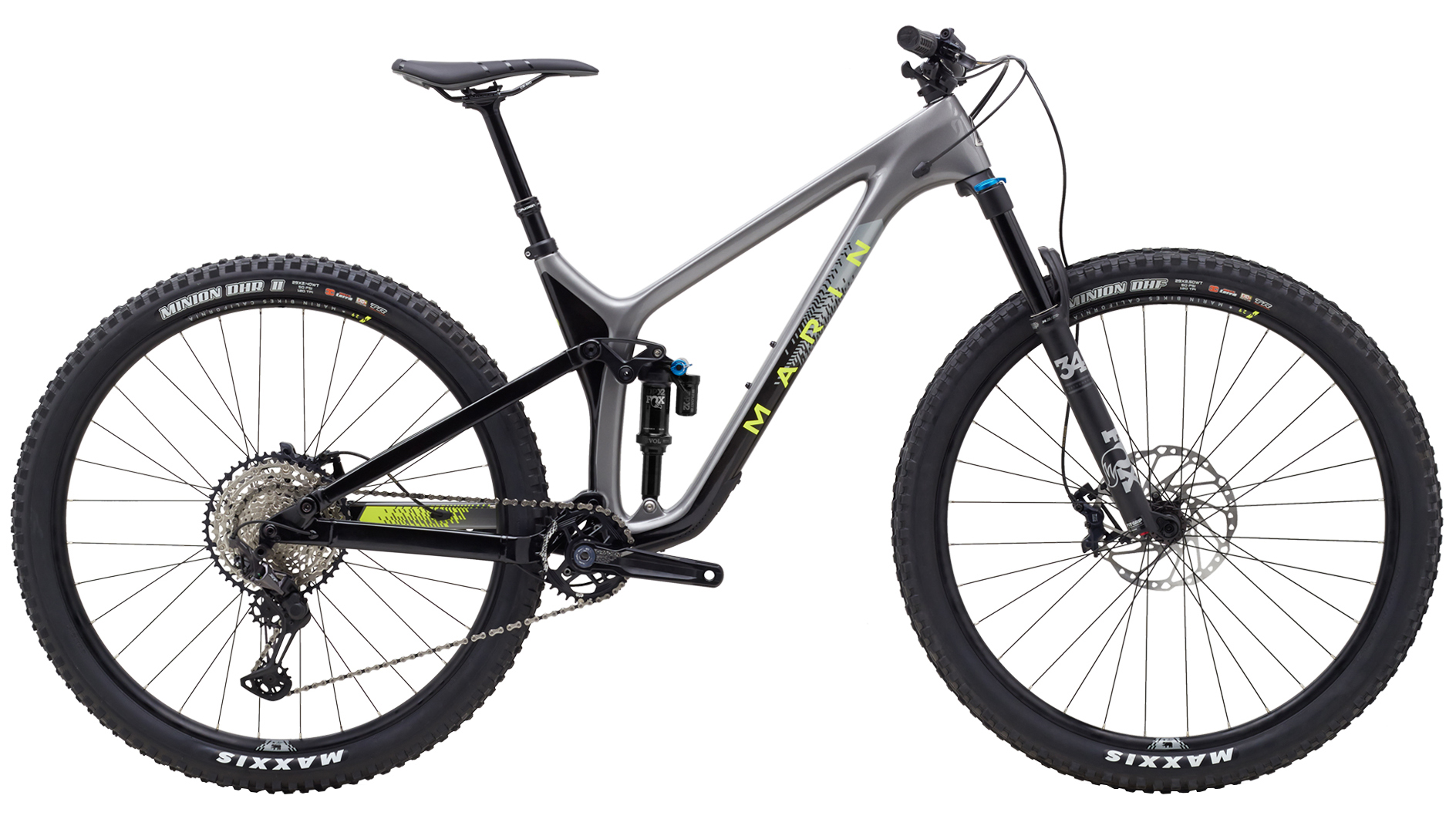 Rift Zone Carbon 2 offers a big improvement when it comes to shifting. It uses a 12-spd Shimano XT rear derailleur which is one of Shimano’s most high-end options.

However, it combines it with the same Shimano SLX 12-speed shifter. This is not a problem though since they are fully compatible and work like a charm together.

The good news is that the drivetrain on Carbon 2 is completely different from Carbon 1, so you know exactly where your money is going. On the front, you get an FSA Gradient crankset with a 32T chainring. On the back, your rear mech will be working up and down a Shimano SLX M7100 cassette with a 10-51T profile. That’s even more gear range which means more possibilities on the trails.

Marin Rift Zone Carbon 2 bounces on a Fox Performance 34 Float suspended fork with 130 mm of travel. It can be adjusted in three different positions, to accommodate different needs and styles of riding. It also features rebound adjustment and a 44 mm offset.

On the rear, you get an equally capable Fox Float DPX2 rear shock, with an EVOL Air Spring and 3 position compression adjustment. You can custom tune it whichever way it suits you.

Rift Zone Carbon 2 might seem unstoppable, but when you need it to slow down, you can simply engage the Shimano SLX hydraulic disc brakes. They clench on massive 203 mm (front) and 180 mm (rear) rotors and stop the bike on a dime.

Zone 3 not only has the best components of all three aluminum models, but it also comes with some extras. Most notably, it’s paired with a dropper seat post, meant to aid riders when switching from hill climbs to downhill drops. Marin decided on an X-Fusion Manic, 1x composite remote seat post, which comes with a thumb trigger to run its internals.

The Marin Rift Zone series bikes are built with downhill racing in mind, which is why their brakes are so heavy-duty, and their geometries so aggressive. While most mid-range cyclists just getting into MTB trails may not notice much of a difference, seasoned riders may be a bit more opinionated.

It’s also a little surprising that Marin skimped on speeds for the Rift Zone 1, as there are plenty of mid-level drivetrain components out there that would’ve fit into this model’s cost. While not the biggest issue in the world, some potential buyers might opt for something else in the same $1400-$1600 price point due to the lack of speed range.

While there are definitely some differences between the Rift Zone’s different levels, the truth is that Marin has created a series of race-ready mountain bikes that maintain quality across the board. And considering that they all share frame specs, the Marin Rift Zone series also stands up as one of the most upgradeable framesets on the MTB scene today.