Brooks Saddles – Do They Live Up to the Hype? 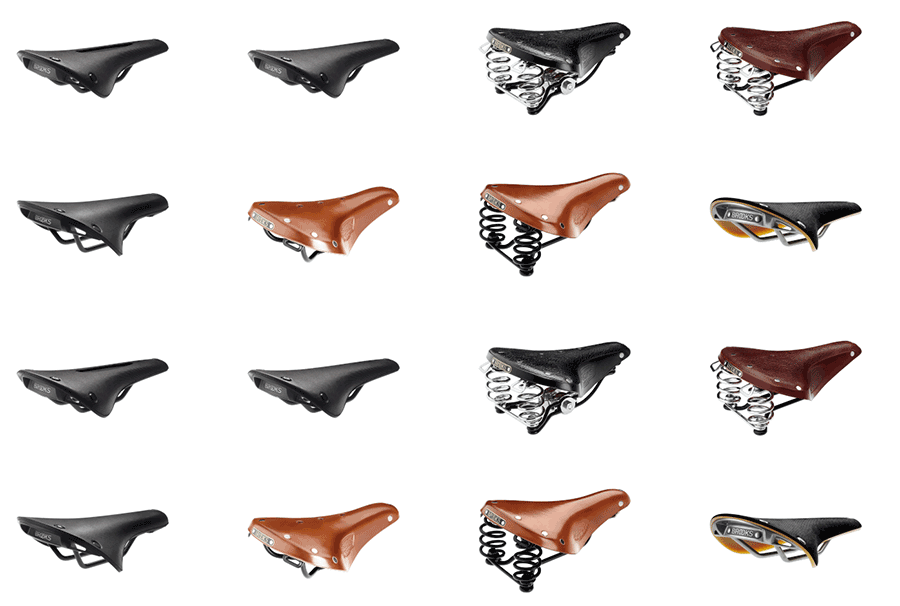 There is no debate in the cycling community more contentious than that of the great Brooks Saddle Debate (okay except maybe helmets, but let’s avoid that one!) Brooks has been making bicycle saddles since before “Pa fell off the bus”, which Brits will know means a very long time!

Brooks is a UK-based bicycle saddle manufacturer from Smethwick, England, and they’ve been making their signature leather saddles for over 100 years. They’re widely regarded to be the most comfortable saddles around that don’t cause saddle sores once you break them in.

Founded in 1866 in Hockley, Birmingham, Brooks began life as a leather goods company and patented its first leather bike saddle in 1882. Allegedly, the leather saddle came to be when John Boultbee Brooks decided the typical wooden bike saddle was too uncomfortable and stretched leather over a metal frame, using rivets to hold it in place. This iconic Brooks bicycle saddle design has barely changed since that day and was probably the first modern bicycle saddle ever made.

Leather, metal, and over a century of experience!

Although the Brooks brand is most popular for its leather saddles, it also produces several non-leather saddles plus backpacks, bags, and cycling helmets. After being bought out by Raleigh in 1962 and then surviving liquidation in the late ’90s, Brooks is now owned by the popular Italian saddle manufacturer, Selle Royale.

The Swallow was Brooks’ answer to a racing saddleback in the ’30s although it’s a bit heavy for today’s racers. It has a thinner design for race positioning and comes in steel and titanium versions.

The oldest in its range, with over 20+ different finishes 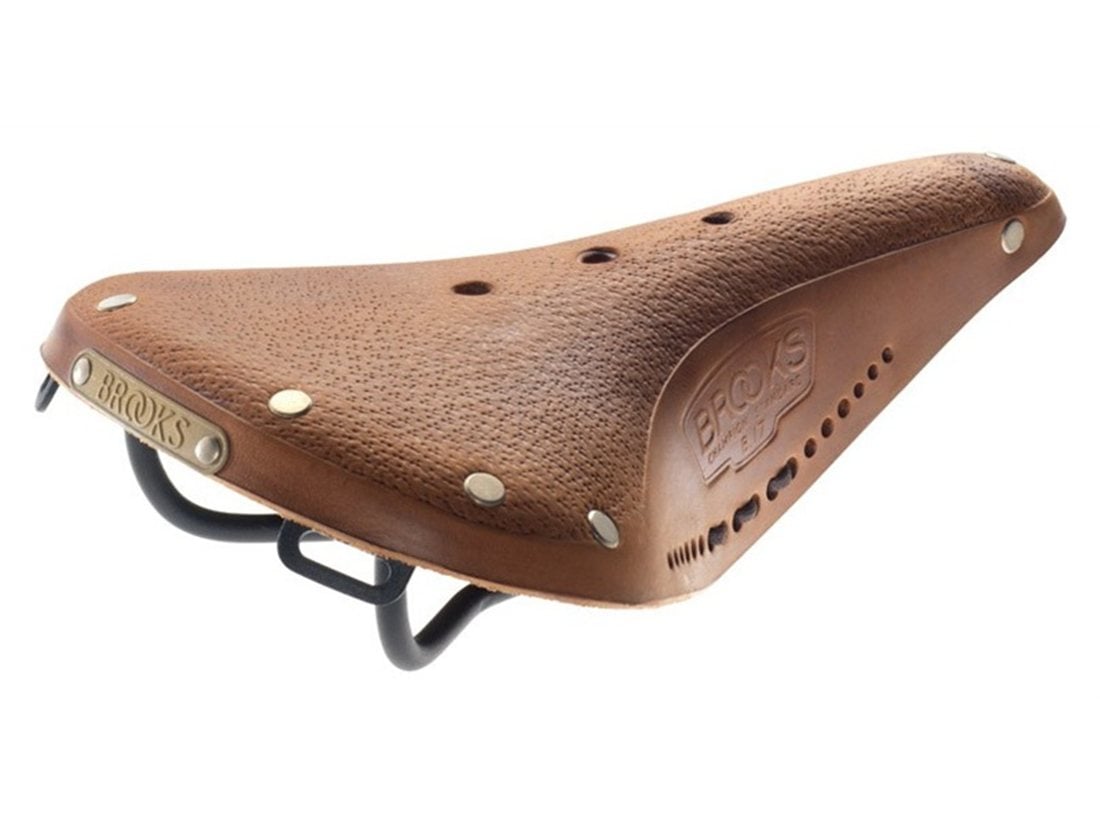 Arguably the most popular saddle in the Brooks range, the B17 has barely changed its design for over 100 years. It has a traditional steel frame with riveted leather and three air-holes for ventilation. There are several varieties available, including an aged, narrow, and female version, as well as a B17 Imperial and B17 Titanium version. 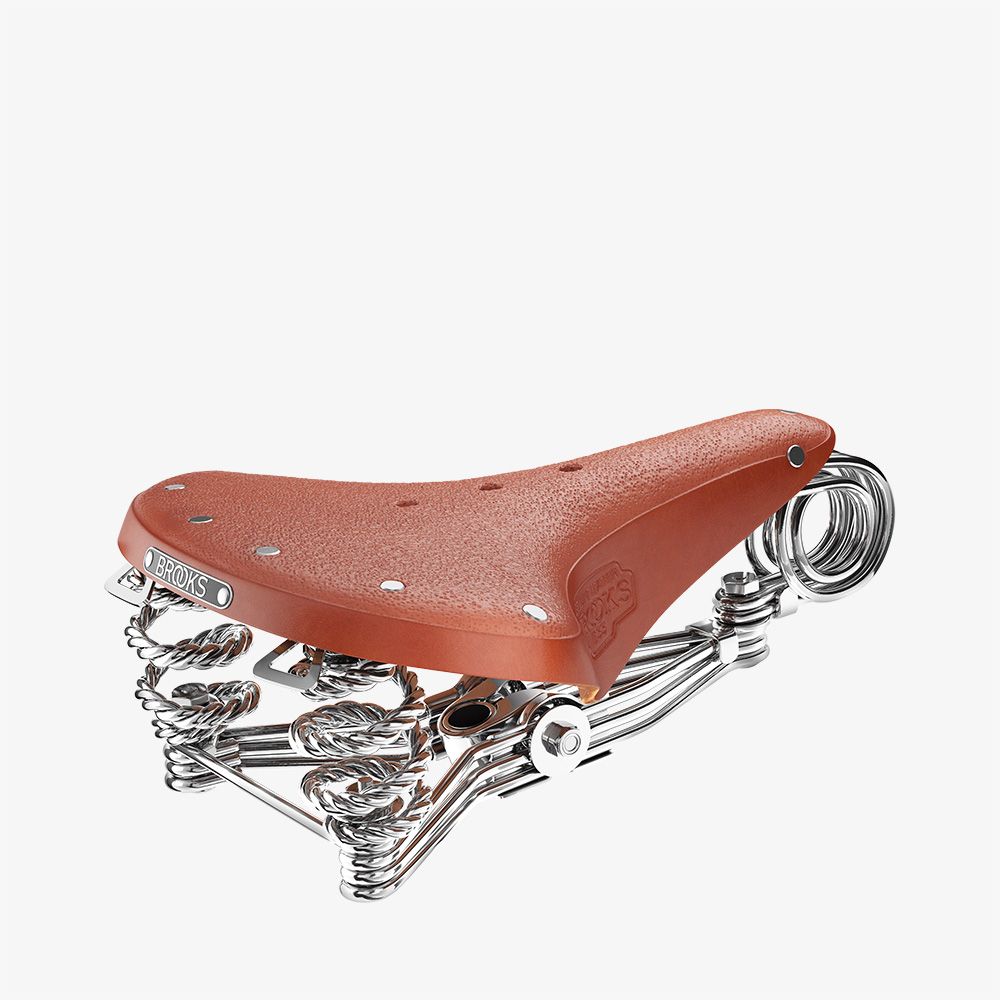 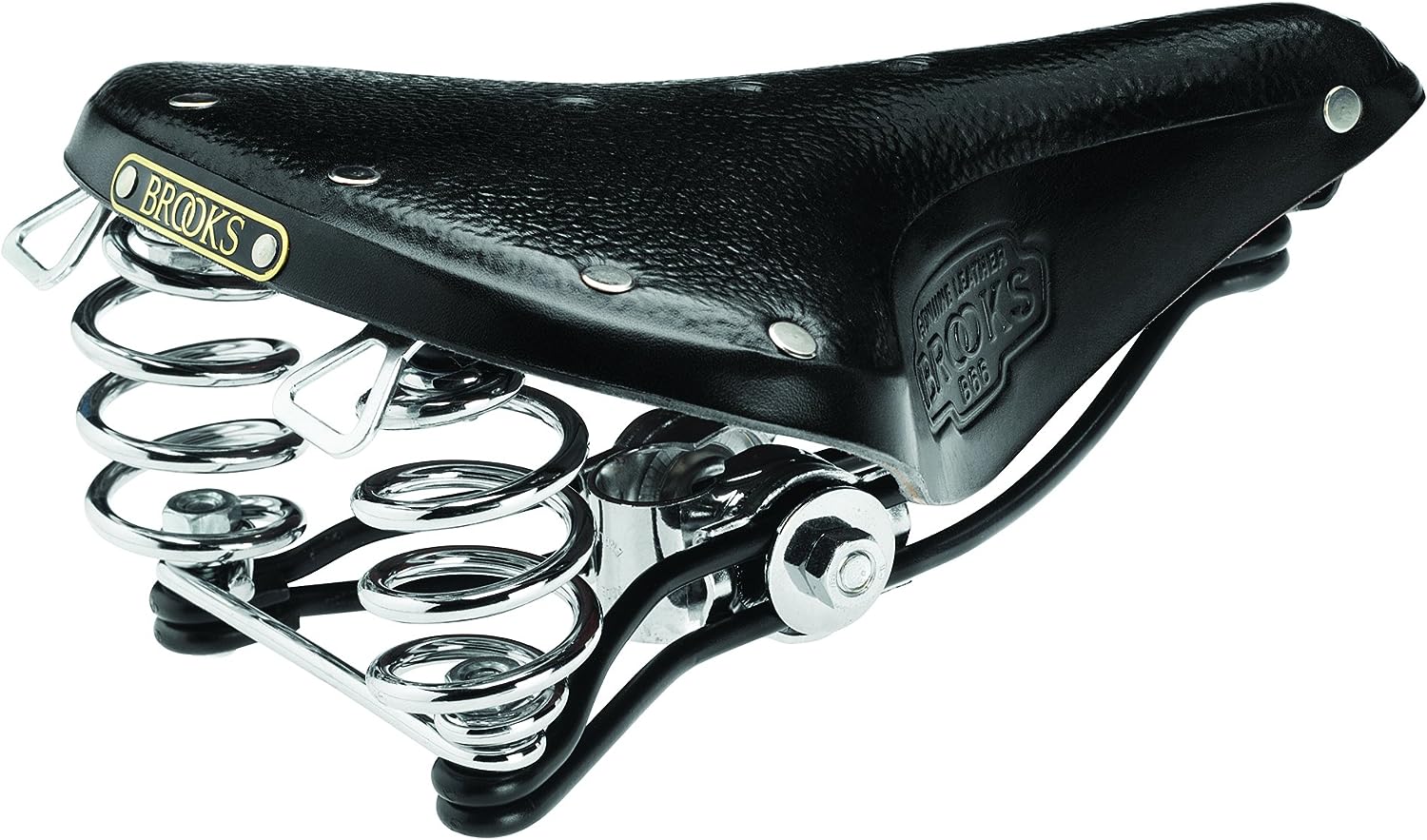 Released in 1927, the B66 is one of Brooks’ oldest and most loved models. It’s a traditional leather coil-sprung saddle with two rear springs for a comfortable, upright seating position. The B66 comes in a standard and short model.

The B67 comes in four models, standard, short, softened and softened short. It’s an upgrade of the traditional sprung B66 model, built for comfort with two rear coil springs and an upright seating position. 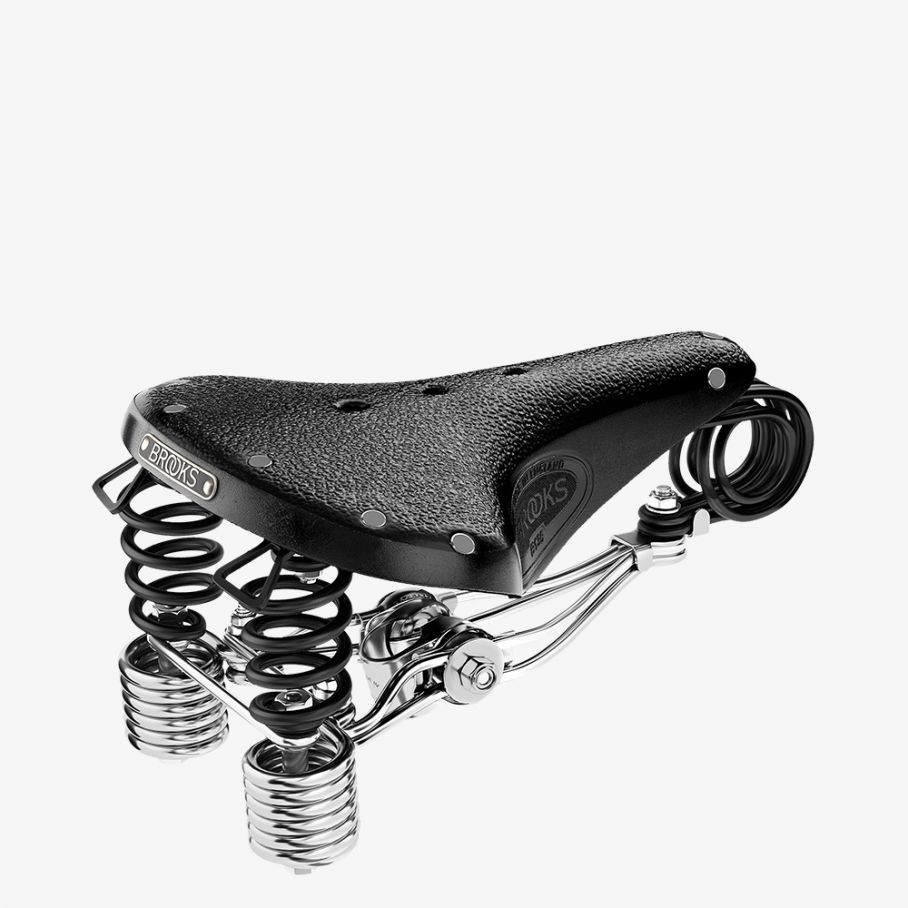 The B135 is another traditional coil-sprung leather saddle with a front loop and double rear coil springs. This provides the most saddle suspension possible for those needing extreme comfort and shock absorption. 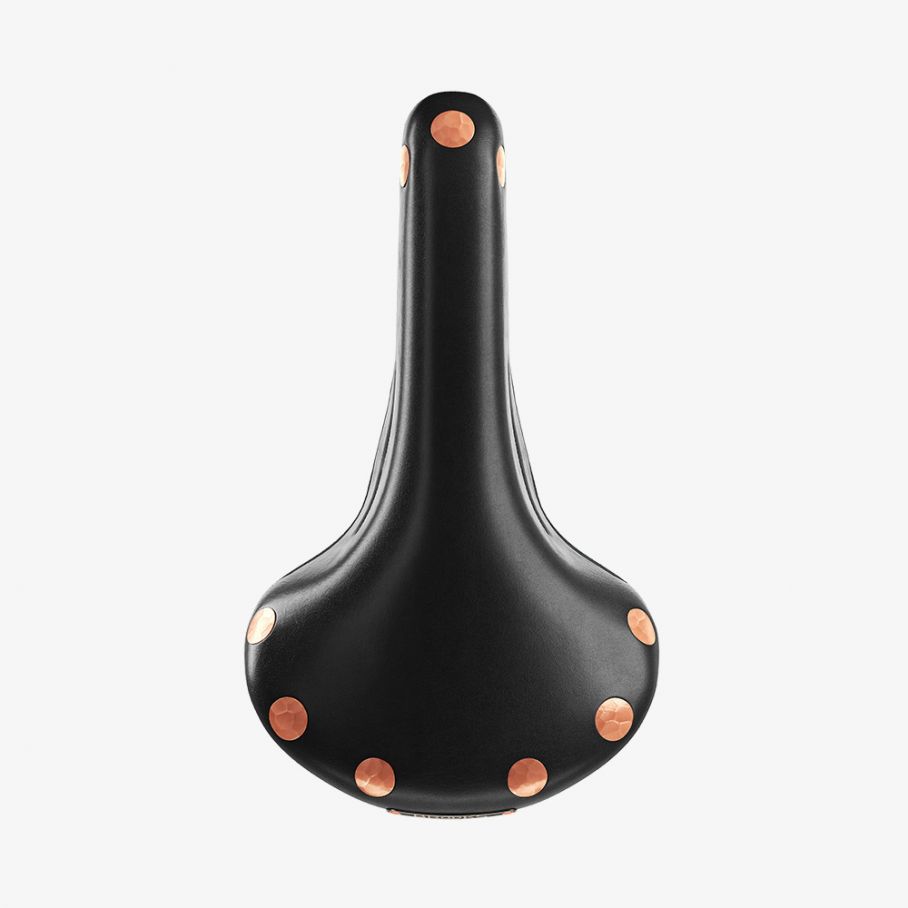 The Team Pro is similar to the B17, with a slightly shallower top and hand-hammered copper rivets. It also comes in a Titanium version or one with a Chromed steel base.

The C13 is a modern, lightweight Brooks saddle made from vulcanized rubber with a nylon top and carbon rails. Optimized for touring, it’s both waterproof and flexible, providing the cyclist with a comfortable ride over long distances.

It comes in three sizes, 132mm, 145mm and 158mm, and several variations including Carved, Special, and Carved Special.

This modern Brooks Cambium saddle is made from organic cotton canvas and vulcanized rubber hybrid to provide comfort and waterproofing. It has steel rails and a reinforced plastic backplate with clip-in loops for accessories.

The various different Cambium versions have different widths and cutouts depending on preference. Unlike leather saddles, they require less maintenance.

The flyer comes in six variations, including the Carved, Special, Softened, Short, and Black Copper Limited Edition. It’s a sprung saddle done in the classic style with two coil springs holding up the rear of the seat. The saddle provides extra comfort and suspension for long-distance riders and uses the same leather cover as the ever-popular B17.

A Brooks bicycle saddle is one of those items you either love or hate and has become a highly divisive topic amongst cycle fanatics the world over. A quick browse through any cycling forum will reveal several comments from first-timers complaining about how the hard leather saddles leave them with sore bums.

These are usually countered by Brooks purists ensuring them that with enough time and proper treatment the saddle will mold to fit your rear end.

In addition, the saddles are considerably heavier and often more expensive than modern plastic and nylon saddles, making them unattractive to weight-conscious competitive cyclists or those on a budget. This is why they find their largest market in the dedicated bicycle touring and bikepacking scene.

When first getting a Brooks saddle, it’s advisable not to plan any long rides until you’re sure it’s comfortable. Some people find them comfortable out-the-box, but this is rare. Over time, your ‘sit bones’ will cause small indentations in the leather, taking the pressure off and distributing it evenly around your rear end. At this point, most users find the Brooks saddle becomes incredibly comfortable and feels like it’s ‘hugging your bum’. 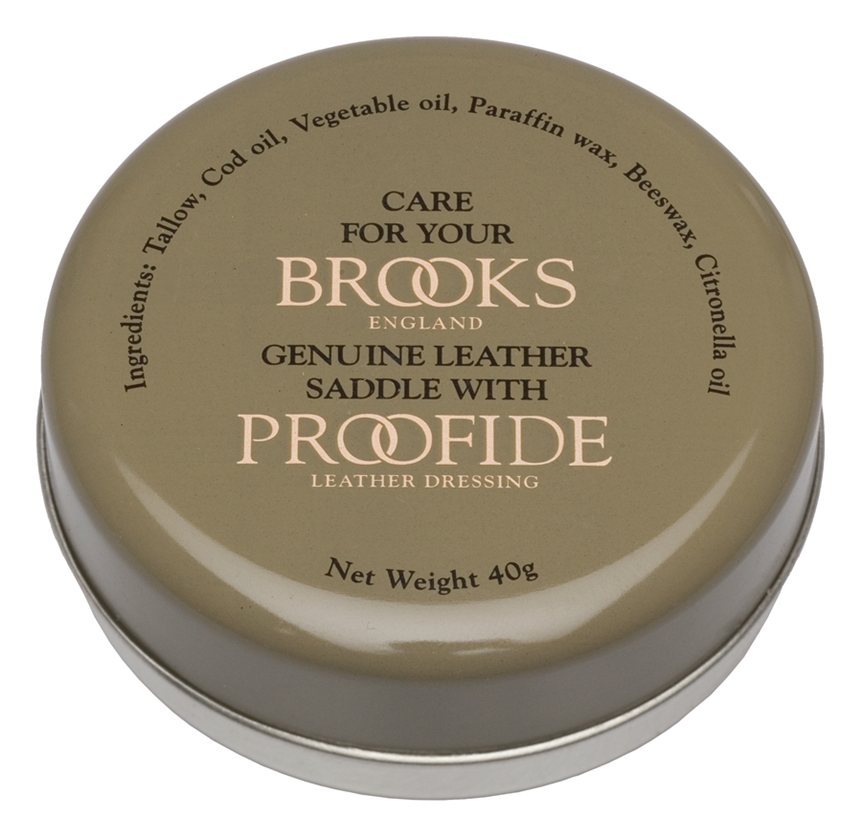 The length of time taken to break it differs from person to person. While it can take some people a few days, others report racking up hundreds of miles before truly getting comfortable. So be prepared to put in the time if you want the reward!

If a saddle becomes too loose over time, the leather can be stretched using a small screw under the nose piece. However, this should be done with care and precision so as to not tear the leather.

Brooks leather saddles are not waterproof, which is good for sweat and moisture absorption but bad for long-term care. If you expect to ride often in wet weather you should occasionally apply Brooks’ Prooftide dressing to avoid water damage.

Do they live up to the hype?

Brooks is the saddle of choice by veteran cycle tourists the world over. Once ‘broken-in’, a Brooks saddle will carry you comfortably through those long, 12-hour days of cycling.

What’s more, if properly maintained, a Brooks saddle could be the last saddle you ever need to buy.

The strong steel chassis and handmade leather coverings are designed to last a lifetime, making Brooks one of the best value-for-money saddles available in the long run!

So, what’s the verdict?

Nowadays, with the wealth of affordable, cheap materials available to build saddles, it’s easy to find a saddle that is instantly comfortable to sit on. Back when John Brooks made his first saddle, hard leather was the only option. This forced the inventor to take the time to mold the saddle to fit his rear, after which it quickly became a very comfortable saddle for life.

It takes about 3 days to make a Brooks leather saddle.

For many casual cyclists, going through this process may not be necessary. For short trips of an hour or less, any standard saddle will be sufficient. However, over long distances, cheaply made gel saddles lose their comfort and quickly become hard, causing chafing and bruising. Furthermore, few low-quality saddles last more than a year at best before the nylon tears or the seams come apart.

Where to Buy Brooks Saddles Online?

7 thoughts on “Brooks Saddles – Do They Live Up to the Hype?”