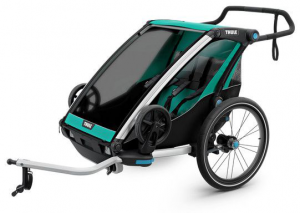 Forget the expectations you had before thinking of getting a lightweight bike trailer for outdoor adventures – Equipped with high-end features, The Lite is Thule’s most minimalistic and lightweight kids’ bike stroller that’s designed to perform on four different activities – strolling, jogging, cycling, skiing.

Out of the box, the Chariot Lite comes as a premium-class bike trailer and a stroller which is more than enough for an average active family. The quality of the Chariot-series carriers models will outlive your expectations with ease, and luckily the design of those new models is quite ageless compared to anything else on the market which gives them great second-hand value when selling.

The Chariot Lite is equipped with 20″ inch spoked rear wheels and tube-type tires. High-quality swivel stroller wheels for the front-end come as standard.

Removing the wheels has never been easier – the front stroller wheels simply un-do by opening the large blue knobs – after that, the wheels can be flipped the other way around on the same socket when switching from stroller to bicycle trailer.

Rear wheels can be removed by pushing the blue button on the center of the wheel.

The back-end is well supported by leaf-spring suspension.

Although the Thule’s Chariot CROSS, LITE and SPORT models share the same suspension, the LITE’s suspension is not adjustable. Although there’s enough play on the springs, quite a bit can be done by adjusting the pressure accordingly to the upcoming terrain!

* The recommended tire pressure range is written on the tire’s sidewall!

Push-pedal park-brake under the right foot is easily accessible and works flawlessly. It is recommended to always use the park-break when stopping and going to leave the stroller unattended. Thule carriers have very good rolling qualities.

A fully adjustable handlebar is most likely the most comfortable you’ll ever get to try! It’s not only the adjustable height of it, but also the soft and warm material for a good grip. There is also a safety-strap on the handlebar that’s handy when strolling or jogging.

The Lite comes with an integrated zip-down mesh door-cover that keeps away the bugs and small rocks that could fly up from the rear wheel. Another great premium feature is the inevitable rain cover and the sunshade that come as stock!

Thule also added a battery-powered rear light with the package for added security and visibility. The red light attaches to the upper rear frame! 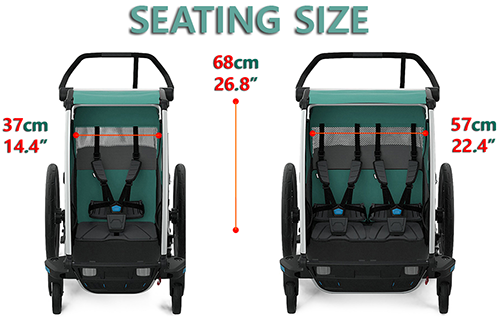 Thule recommends kids up to 40″ / 110cm tall to fit comfortably

Inside of the carrier you’ll find a padded 5-point safety harness, medium-size side pockets for toys, a rear mesh ventilation opening. The seats are well padded for maximum comfort.

Extra-large side windows are made of clear plastic for a clear view and total weather-proof riding experience.

Ventilation for the interior can be adjusted on the front-end of the trailer where there are two vent-holes.

Basic storage inside out for lightweight traveling

The model Lite has cut off all the excess to purely focus on lightweight traveling. There’s still the mandatory storage for the bike arm on the left side of the trailer and a sleek way to store the stroller wheels placing them upside-down on the VersaWing system. The Mesh door has it’s own compartment right under the roof. There are small mesh pockets inside of the trailer for the little one to store their essentials. Biggest compartment on the Lite is the large mesh pocket on the rear end of the trailer. 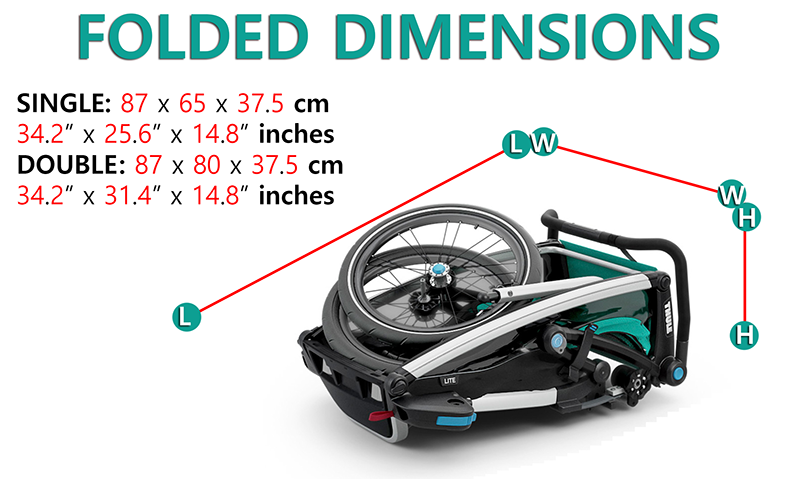 It must’ve been hard to design a folding-system that’s genuinely simple and solid as it’s on the whole Chariot Series. It is by far the most user-friendly and of high quality as you could ask for.

The Chariot Lite comes with an extended length quick-release nut and a ball-point. If your bicycle has a through-axle system, Thule offers a wide variety of most used axles and adapter to suit any bicycle! Check out their extras from the bottom of the page.

Attaching the trailer to the bike is as easy and safe as it can be!

SAFETY NOTES!
WHAT TO BEAR IN MIND WHEN USING THULE’s BABY BIKE TRAILER

The lite is obviously lighter due to lack of the components as the XL storage pouch, brakes. Lite is designed to be used as a baby stroller, a jogger trailer, a cycle trailer and a skiing trailer – 4in1 lightweight cart. Thule VersaWing system allows to freely change from one activity to another.

Why is getting the Thule Carrier a great investment?

Getting a bicycle trailer for kids is a truly priceless investment. Yes, Thule’s kid’s carriers are of premium range and tend to cost a fracture more than the average trailer on the market, but for a few good reasons:

One of the main reasons people tend to choose Thule over other bike trailer manufacturers in the vast field of use with their trailers. The Thule Chariot series hosts a unique feature called VersaWing – that allows changing from one activity to another. VersaWing system also works as wheel guards that help the trailer bump away from posts or small trees that would get stuck between the wheel and the cart!

Out of box the carrier can be used as a pushable stroller or pull behind bike trailer for kids. With availability to get the jogging/skiing kit, the cart turns into a 4 in 1 carrier: baby stroller, bicycle trailer for kids, a jogger and ski trailer. Some people even use the skiing body harness on hikes! So, it’s really a 5 in 1 in theory.

All Thule’s cycle trailers have a logical approach to their design, but as simple and straightforward the trailer might seem, it is still best practice to go through the manual and how-to’s before use. Everything that can be adjusted on Thule carriers – is marked with blue knobs and buttons.

Thule baby bike trailers are known for superior quality, therefore last well over their expected life of use. All the Chariot series bike trailers come with Flynet/Mesh door, rain cover and a sunshade.

People not familiar with the toddler bike trailers tend to have an idea that bike strollers are large and clumsy, heavy to pull and hard to maneuver. It’s the exact opposite of the whole Thule’s range. The turning radius is over 90’degrees on the bike, going left or right.

On a stroller mode, it’s surprisingly compact for its size as the swivel wheels allow to turn freely even in crowded areas.

When you are thinking of getting the jogger kit, it would be the best investment towards supreme passability. Three-wheeled carts have way better terrain-tackling capabilities when the four-wheel stroller. Anyone familiar with the Thule Urban Glide 2 will understand the level of upgrade.

Now if we are talking about the combination of Swedish engineering and Canadian safety regulations – the Lite from the Chariot series is another example of what to expect from a decent bike trailer in 2019. It’s safe for both kids and parents alike. Besides the obvious safety harnesses, a solid frame, flag, safety hooks for the trailer arm – it’s got more than one could expect. 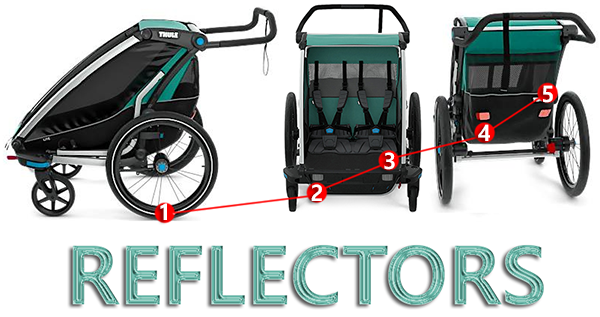 Thule kids’ bike trailers are built for active families who’d like to take the whole family anywhere, without losing too much cargo space inside the car.

Everything that’s not in use can be packed away nicely. Everything around the trailer is neat, nothing’s sloppy or hanging out. It fits right in the city center and deep forest trails. 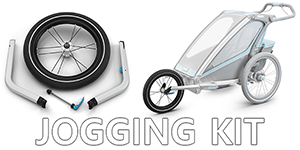 If you really want to use the Cross to the max, a jogging kit is something many Thule Chariot users prefer.

Out of the box, Chariot Sport is a bicycle/trailer and stroller, but the jogging kit allows you to change the two small front wheels to a large single wheel and easily use it as an everyday sport stroller.

Unlike using the trailer as a bike stroller with one arm the jogging kit comes with two. Another great feature with an extra is that you can place the rear wheel on the back of the rear-end storage compartment with two straps (included). There are designated hooks to attach the straps!

The large single front wheel gives the trailer more clearance and stability on uneven trails! And, let’s be honest, that’s usually where the fun starts! A single fixed large front wheel really improves going through sandy, snowy or rocky terrains where the two swivel wheels would struggle to lead the way.

Note: Two arms lock in the same way as the bicycle arm, but there are also adjustable screw-knobs on the trailer-part of the hitch!

The locking kit allows locking the trailer arm on both sides preventing anyone just grabbing the trailer/or the bike and bugger off. Although it takes really two lock’s to lock the whole system, the add-on extra has only one lock and two keys, but it is something!

One major difference between the Thule’s #1 trailer is the absence of disc brakes. If you are planning to take the Cross on some really awesome hikes or fast-speed journeys – disc brakes are probably something you should be looking at. 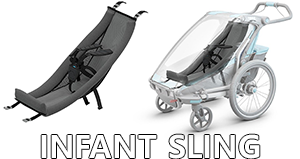 A hammock-style sling allows taking the little ones with the Cross trailer. There’s a safe and special way to attach the sling. The Infant sling lies right over one of the seats, so the same 5-point safety harness can be used. 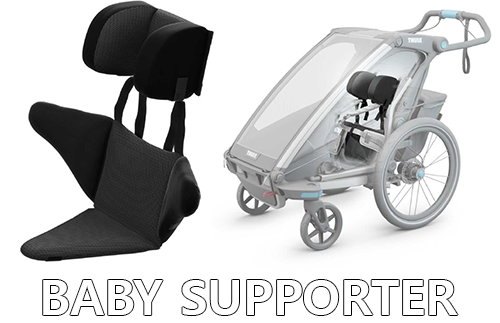 The baby supporter is a great safety feature that allows extra comfort for the little one to feel comfortable. Especially when going on off-road terrains or the kid tends to fall asleep when riding in the trailer) 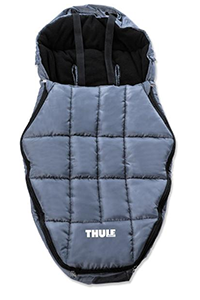 Insulated sleeping-bag-alike cocoon for cold-weather activities. Both models are compatible with the 5-point harness system.

Awesome opportunity to use the trailer on all four seasons. The body harness can be used with wheels on hikes as well!

Thule offers a “Limited lifetime warranty” on their bicycle child trailers and strollers.

The Lite is the best bike trailer in the sporty and lightweight category.

If you are not after too much cargo space and adjustable suspension, but still need all the covers and supreme high-quality features – this bike carriage and stroller might be for you! It’s simple, yet very agile.