Boxing a Bicycle For Public Transit

The author has been there and back, with seven bicycle touring guide books to his credit, all available through Cyclotour Guide Books. He’s been boxing bikes for years.

Please note: This is an original article from the year 2000. It is possible that some information is outdated!

Public Transit To Your Starting Point

A very efficient and enjoyable way to start your cyclo tour is to go to your starting point (on the Great Lakes or Erie Canal) via train, airline or bus. Of course, if you live nearby just ride to the start point.

Cyclotour Guides are designed so that a cyclotourist can begin and end at any point along the described route.  Directions to and from major train stations, airports and bus terminals are provided in the text.

Each carrier – airlines, buses  and railroads – have specific rules regarding the transport of bicycles. All carriers specify that bicycles must be boxed and shipped as baggage.

Tandem, long wheelbase recumbent and other large bicycles may not be able to be transported on airplanes or buses.  Call the specific transportation company you intend to use for information.

Amtrak, VIARail, and the airlines will sell you a box at the terminal.  Phone the train and airline company at least 2 days in advance of your departure to make certain there are bike boxes at the station/terminal.

Tell the station/terminal baggage person to reserve a bike box for you.  Bus companies do not have boxes for sale at their terminals.  Read below to find out how to obtain a bike box for bus transport.

You must have your own tools to do this (cone wrench for the pedals and the proper size hex wrench for the handlebar stem). There are no bicycle tools at train stations, bus or airline terminals.

If you are traveling via train or plane then purchase the carrier’s box.  These boxes are designed so that you simply have to turn the handlebars and remove the pedals to fit a bicycle into the box.  Very simple!  Scroll down for detailed directions.

Using the carrier’s bike box assures that the carrier can not claim your box was too weak for holding a bicycle.

On domestic US flights, you will also have to pay an over-limit (excess) baggage charge which can be as much as the additional US $60.00.  This excess baggage charge does not apply to international flights.

Generally, commuter airplanes do not have facilities for the transport of bicycle boxes on their planes.  Your bike may be shipped on a different flight.

Unless you have a folding bicycle or use a Japanese Rinko bukuro (a bicycle bag, 2m.x2m./6.5ft.x6.5ft.) Amtrak & VIARail only carry bicycles in baggage cars. This is significant!  Not all Amtrak stations have baggage facilities!

Make certain that both your originating and terminating stations have baggage facilities for the train which will be transporting both you and your bike. Otherwise, your bike will be at one station and you at another.

Amtrak’s policy concerning bicycles in passenger cars is changing.  As the National Railroad Corp. (Amtrak) purchases new or reconditions older passenger cars it is making provisions for the carriage of bicycles directly in the passenger compartment.

Check with Amtrak. Some trains on California, Vermont & New York routes already have limited space for bicycles in the passenger compartments or carriage of unboxed bikes in baggage cars.

A permit is needed and must be obtained before boarding a train.

Bus travel presents a different problem.  Bus line offices in the US do not
stock bicycle boxes. In Canada, you must call the office (five days before
departure) to arrange for a bike box from Greyhound Administrative
Services.

Thus you will have to do one of the following:

1.  Obtain a bicycle box from a bike shop;
2.  Go to Amtrak/VIARail or an airport and obtain a box from those carriers;
3.  Construct your own box from two or smaller boxes;
4.  Put your (unboxed) bike into the baggage compartment when the
driver’s back is turned.  Many drivers suddenly disappear with the
implication that you should do this heinous crime!

Many local buses (city buses) in the US and Canada now have bike racks on them. Use is usually free of charge.

Ah!  To be back traveling in Africa (Peace Corps ‘66-’69) where bikes are simply placed on top of the bus or lashed to the wall of the train’s baggage car.  How simple!

And rarely were the bikes damaged.

How To Box Your Bike

The first time I boxed my bike I did it at home. I inserted extra cardboard into the box to reinforce the long sides of the box.

I double-sealed all edges using reinforced sealing tape. I loaded the box into my station wagon and brought it to the terminal the day before my departure date. It took an interminably long time to do all this–over two hours.

Make life simple for yourself.  Pack the box at the terminal.  Allow an extra 45-60 minutes to pack the box.  I’m down to 15-20 minutes of bike-into-box packing time now!

Before you start on your cyclotour, take pictures of your bicycle, with and without panniers.  Open the panniers and take some pictures of the contents of the panniers. If any damage occurs in transit you might need these pictures to assert your claim.

1. Obtain
a. Filament packing tape ~2″ (~3.2cm) wide.
b. Cord (you have it in your panniers).
c. Black permanent felt-tipped marker.2. Obtain a bicycle box.3. Clearly mark all six sides of the bike box.  Use a black permanent
marker. Write in big letters and numerals:
Destination:
Departure date:
Train or Flight number:
Ticket number:
Your name:
4. Make the box stand up!
a. Square the box and tape closed one end.
Use filament packing tape ~2″ (~3.2cm)  wide.
b. Some folks place a small triangle of cardboard at the closed end
of the box to minimize the bike in the box movement.

…Or what You must do to your bike to make it fit into that slim box!

1. Tools
a. Hex wrenches for
1) Brake cables
2) Stem bolt
3) New fangled pedals
b. Cone wrenches for old, fangled pedals
c. A screwdriver, flat & Phillips, might also be necessary.
d. Tape or cord for tying up cranks.
2. Pedals & Cranks
a. Remove the pedals using a cone wrench; on newer bikes, the pedals
(cranks) are removed using a hex wrench.
b. Tape or tie one crank (if not removed) to a chainstay.
c. Put your pedals into a pannier.
3. Handlebars
a. Loosen the front brake cables.
b. Loosen the handlebar stem bolt.
c. Twist the handlebar stem. Usually, you do not have to completely
remove the stem.
d. Turn the handlebars so that they are parallel to the bike’s top tube.
e. Wrap or tie the handlebars to the top tube or front rack.
4. Tires
a. If you are traveling by plane, deflate your tires at least 20 psi.
Airplane baggage compartments are not pressurized. You might find
a flat tire at your destination!
5. Pack up your tools and put them back into your panniers! 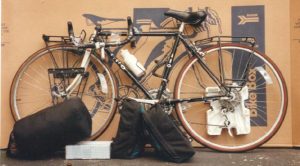 Into the Box, the Bike Goes!

1. Wheel the bike into the bike box. Yippee!
2. Secure the bike by wedging your sleeping bag and a pannier between
the bike and the box sides. Transportation companies officially forbid anything besides the bicycle to go into the bike box with the bike. Heck, your panniers are permanently attached to your bike!a.  Do not overload the box with heavy panniers.
b.  Seal the open end of the Bike Box with filament packing tape.
c. You can place a few extra lengths of packing tape wherever you
want on the box!
3. Bring the filled bike box to the baggage room and obtain a baggage
claim check.
Keep it with you.  You will not be able to claim your bike without this
claim check.
4. The time needed to disassemble your bike and pack the bike box: = 20-45
minutes.

1. Claim your bicycle!
2. I have to preface this discussion of damage claims with the fact that
my bike has never been damaged traveling via Amtrak and only once on
a plane trip. Amtrak stores bikes in an upright position in its baggage
cars. Airlines and bus lines store bikes on their side in baggage holds.
3. Check the bicycle box for possible in-transit damage.  If you see any
damage to the exterior of the bike box, immediately take a picture of the
damage and show the damage to the baggage personnel before you
open the box.
4. Open the bike box, check your bike for any damage or missing items.
If damage occurred, immediately show it to the baggage personnel
and complete the damage claim form.
5. Assemble your bike.  I hope you brought the hex wrenches and cone
wrench!
6. After assembling your bike, take a short ride in the terminal to make
certain there is no non-visible damage to the gearing, frame, wheels, etc.
If you determine that there is some damage, take a picture of the damage
and immediately show it to the baggage personnel.  Ask for and
complete the damage claim form.
a.  If your bike was damaged:  Find a local bicycle shop (look in the
phone book.) Purchase the part, etc. Copy the receipt and make
copies of your completed claim form.  Send a copy of the receipt
with the original claim form to the carrier. Mail home the original
receipt and one copy of the claim form.  It takes 2-6 weeks for
most airlines, bus lines, or Amtrak to begin to settle baggage damage
claims so simply enjoy your cyclo tour.
7.  No damage!  Hurrah!  Yippee!  Enjoy your cyclo tour!

Note the Styrofoam protection for the derailleur…